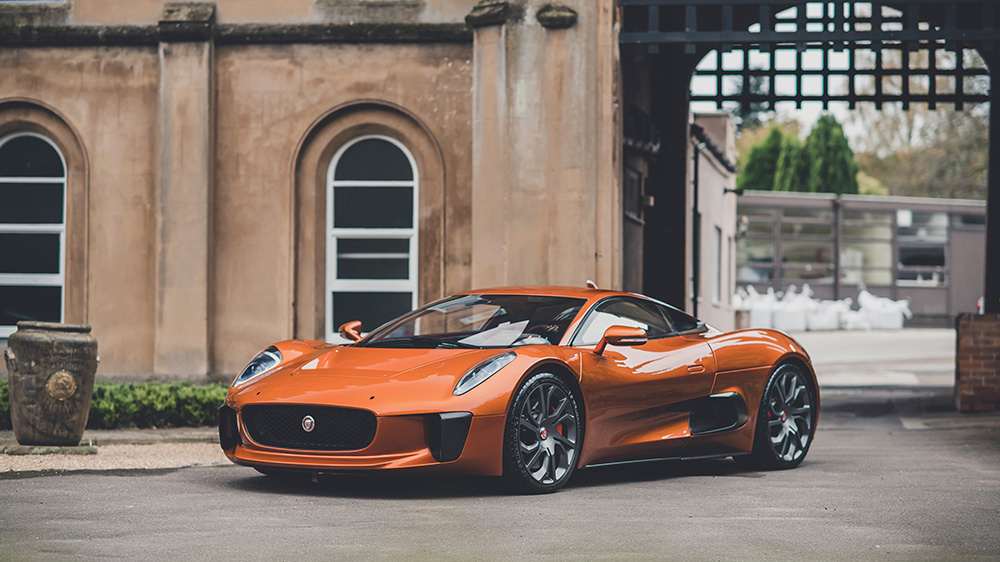 This Ultra-Rare Jaguar Was Driven by a James Bond Villain in ‘Spectre.’ Now, It’s Up for Sale

The C-X75 was one of four stunt cars used to film a chase scene set on the winding streets of Rome.

For over 60 years, the James Bond franchise has served as a showcase for some of the world’s sexiest cars. And while we all know Agent 007 loves his Aston Martins, the villains in the long-running franchise have sported some standout supercars as well.  Now, one of the most famous vehicles driven by a Bond baddie, an ultra-rare Jaguar C-X75 prototype, is hitting the auction block.

The curvaceous supercar, which appeared in 2015’s Spectre, is set to be sold by RM Sotheby’s at its Abu Dhabi auction at the end of the next month. One of four stunt cars built specifically for a chase scene in the 24th Bond film, the C-X75 was driven on screen by Dave Bautista, who played the villainous assassin, Mr Hinx.

But the stunt car isn’t just a choice example of Bond memorabilia; it’s also a piece of automotive history. Unveiled as a concept in 2010, the car was set to go into production in 2011 but never did—the British automaker ended up producing just five examples. But two years later, Spectre producers approached Jaguar and Williams Advanced Engineering about making four special stunt versions (along with two “standard” versions) for use in filming. This specific car is the first.

In addition to being rare, the C-X75 is mighty impressive as well. Because it had to survive the rigours of filming on the winding streets of Rome, the car was outfitted with a tubular spaceframe made of extra-thick steel tubing and an extra-travel suspension. It also features a rebuilt supercharged V8 engine capable of producing an impressive 366kW.

While you wouldn’t know this was a stunt car from the outside, that quickly becomes clear once you’re inside. The elegant and luxurious touches associated with Jaguar are nowhere to be seen, instead replaced by a barebones interior that features a race car-style steering wheel, dash buttons and hydraulic handbrake. But considering the vehicle’s history, that’s just part of the charm.

Following filming, the car was sold to a British collector who has barely driven it since, according to the auction house. That means whoever is lucky enough to put in the winning bid is getting a car in fantastic condition. That seems only fair, because the new owner will have part with somewhere between US$800,000 and US$1.2 million  (roughly A$1.16 – A$1.7 million) to get it.

Check out more photos of the C-X75 below:

RM Sotheby’s
ADVERTISE WITH US