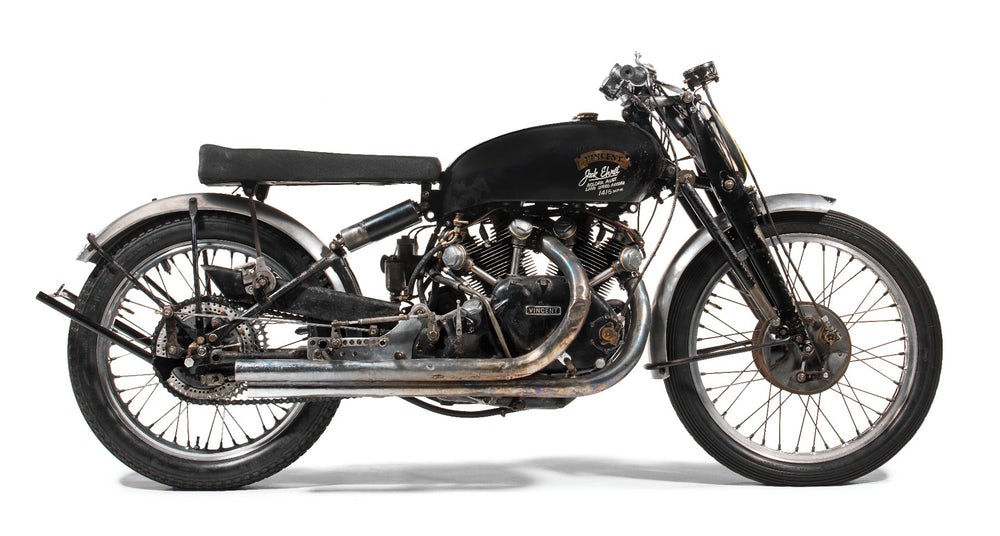 Unrolling the myth of the Black Lightning

Why did the Ehret Vincent Black lightning become the most expensive motorcycle in the world when it sold at Bonhams?

The bikes created by British manufacturer Vincent Motorcycles are some of the most sought-after collector motorcycles in the world, and the Black Lightning occupies the top rung of this hierarchy. Maybe it has something to do with the fact that when it came out, it was the fastest production motorcycle in the world, even beating out the fastest production car of the day, the Jaguar XK120. Or maybe it’s all of the national speed records that it set around the world. Or just maybe it has something to do with the iconic photograph of Rollie Free essentially planking on his Black Lightning in nothing but a helmet, shoes, and swim trunks to increase aerodynamics while setting the American motorcycle speed record at the Bonneville Salt Flats in Utah.

Whatever the reason, the Black Lightning’s popularity was apparent when an example of the exceedingly rare bike—only about 33 were ever produced and one of just 19 with matching frame and engine numbers still in existence—broke the record for the most expensive motorcycle ever sold at auction when it went for US$929,000 at a Bonhams auction in Las Vegas earlier this year. This particular example, a 1951 Black Lightning was even able to best the considerable celebrity clout of Steve McQueen, whose 1915 Cyclone board track racer—the previous record holder—went for US$825,500 in 2015.

The bike had several owners, but it was in the possession of Australian motorcycle shop proprietor and racer Jack Ehret for the longest period—47 years. During that time, it smashed the Australian Land Speed record, hitting an average of 141.5 mph, and participated in numerous races. One of the most compelling things about the bike is that it is an original, which is exceedingly rare because of the beating they usually take on the track—a legacy that is still evidenced by the wear and tear that is still visible on the bike.

When the Ehret Vincent Black Lightning finally went up on the block on January 25 of this year, war broke out between a bidder in the room and one on the phone. Eventually the in-person bidder put in one more raise of the paddle just before the sale closed, bringing the price up to US$929,000.