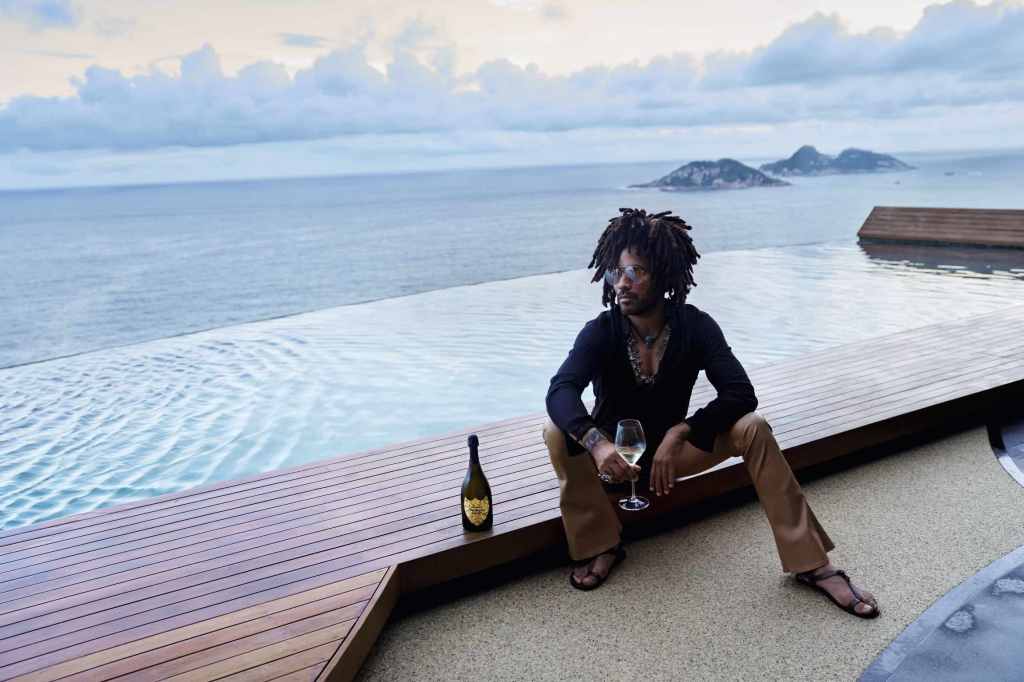 The music legend’s role as Dom Pérignon’s Global Creative Director is throwing up some tasty offerings.

He’s a household name by virtue of a musical career that began in 1989 with Let Love Rule and saw him sweep up Grammy Awards for Best Male Rock Vocal Performance four years in a row from 1999 to 2002. Those in tune with Kravitz’s broader creative output, though, will be equally aware that he founded an eponymous interior and furniture design company back in 2003, and has since furnished private homes and hotels and collaborated with giants including starchitect Philippe Starck, Kartell, Swarovski and Lea Ceramiche.

His appointment as Creative Director of Dom Perignon last year, meanwhile, has so far involved music, film, photography and packaging design. What’s really caught our eye lately, though, is this Table Bar (A$119,000), which pulls apart to reveal illuminated bottles of Dom Pérignon, glasses and an ice bucket at the centre. Ordinary mortals won’t become as cool as Lenny himself any time soon – but ownership of this is a step in the right direction. 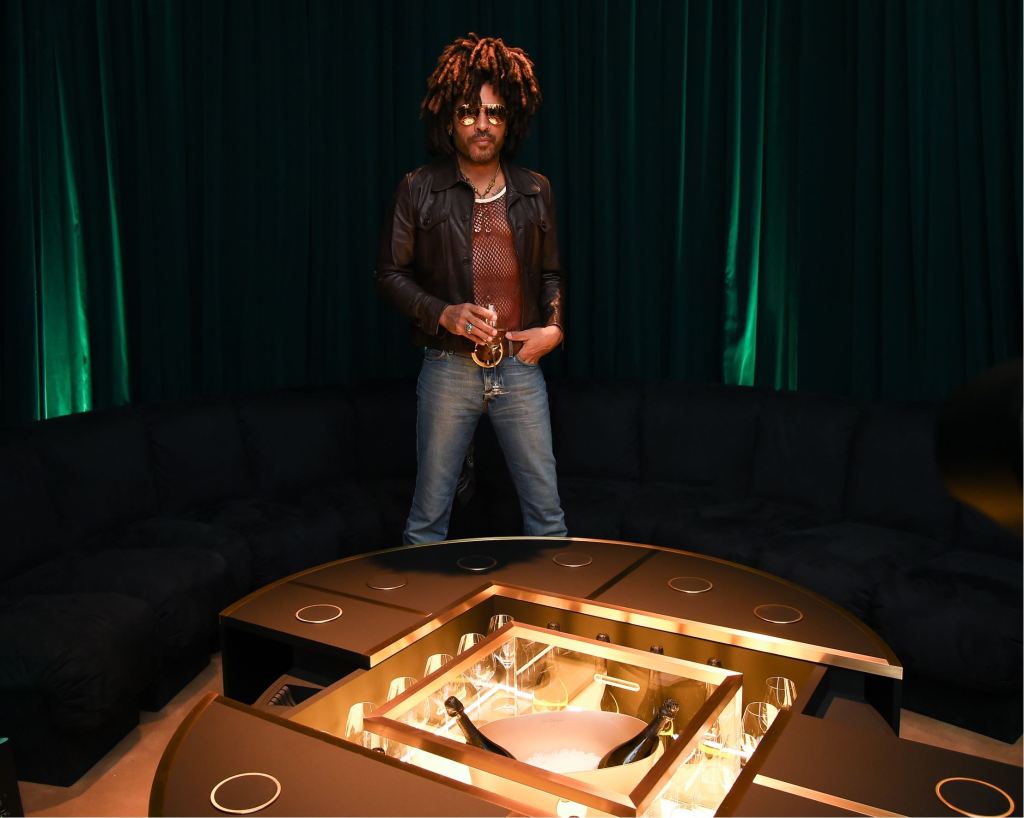 What’s the appeal, for you, with this gig?
I just love being creative, man. I love photography, I love furniture, I love doing interiors, I love architecture and I love music, obviously. The art of wine-making is something which I’ve been educated in over the last ten years, thanks to Dom Pérignon’s former Chef de Cave Richard Geoffroy. He just left after 28 years. This project allows me to be creative without being confined to a single medium.

How do you go about marrying Dom Pérignon’s very defined aesthetic to your own tastes and style?
I have to respect their legacy but understand the brand in my own way. When it came to discussing the kind of decisions I wanted to take there was nothing that we didn’t see eye to eye on. It’s a very open relationship…

What were your priorities with the photography campaign, The Art of Celebration?
The main thing I wanted was for it to be real. I didn’t want it to be staged. It’s about the ritual of drinking Champagne together, and those special life moments, so I got together a group of people who I thought would be interesting in a house in LA I’ve just finished designing. This was the last night I had occupancy before the owners took over. Via papers. The next morning. So what do I do? Throw a party, bringing in 100 crew, plus people from Dom Perignon and the agency, assistants, caterers, chefs… And the house had to be perfect by the morning, and it went on long into the night. And I just captured it. 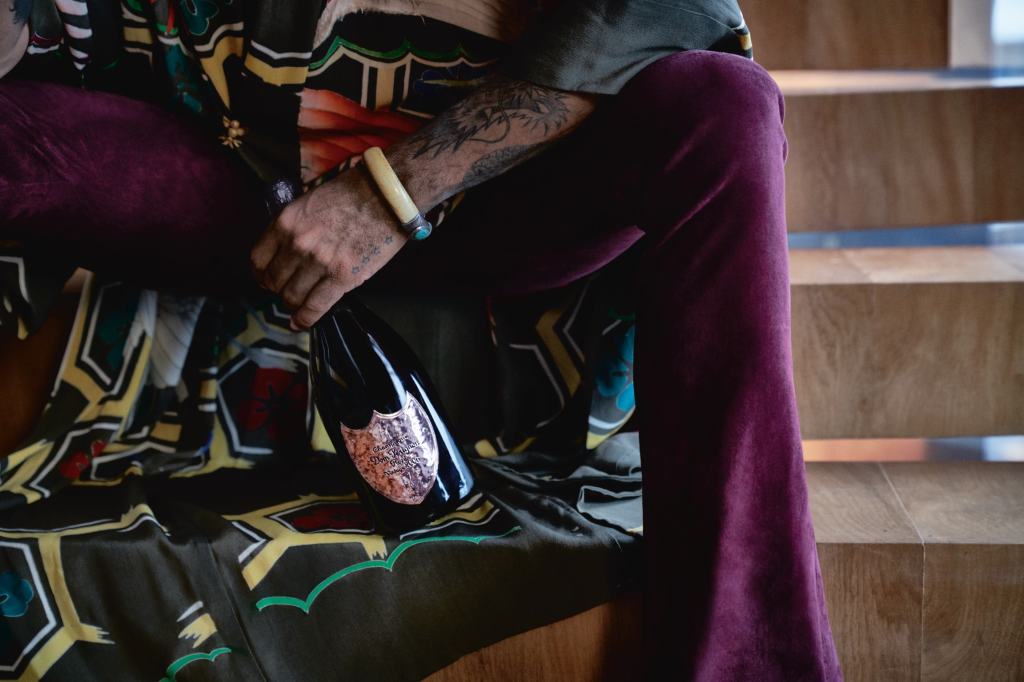 Any particular inspirations?
I was very inspired by a photographer called Ron Galella, who was basically a paparazzi. He took these beautiful back and white photographs, with a flash, at Studio 54 in the 70s. And I love the vibe. Harvey Kietel is the coolest man ever. Susan Sarandon is so beautiful, and open and trailblazing and strong. We had Alexander Wang, who is a designer and a friend of Zoe’s – and it was the first time I’d worked with my daughter too. We had Benjamin Millepied, an amazing French dancer and choreographer, who’s married to Natalie Portman; Hidetoshi Nakata who was a soccer player and is a style icon.

What made you and Richard Geoffroy have such a combustive chemistry?
I’m always really interested in anything I know nothing about. I think it’s fascinating how much the art of wine is like music or any other kind of art: dealing with things that can be controlled, while also dealing with things you have no control over. If there’s a frost or the weather’s a certain other way, you either lose your entire year’s crop or you mould your creation around the flaw and come up with something beautiful. It’s the same with music – I’m in control of writing it, performing it, producing it, but then there’s these moments – these things that are mistakes but are not mistakes. Then he joined me in my world – the studio, the concerts – and he made these profound speeches after the show, relating what he’d just watched to making wine. And we became very close, via how different and yet how similar we are.

What’s your ideal response to your work?
It’s hard for people to care about anything these days, so to get any kind of reaction is beautiful. I’d want to describe my aesthetic as dynamic, sexual and comfortable. It has to be comfortable  – a lot of things look great in photographs but if you can’t lay back and enjoy furniture that’s no fun. Early on I made mistakes because I was interested in creating things that just look really good. I created rooms in my house that I never wanted to go in but looked great when I passed them. 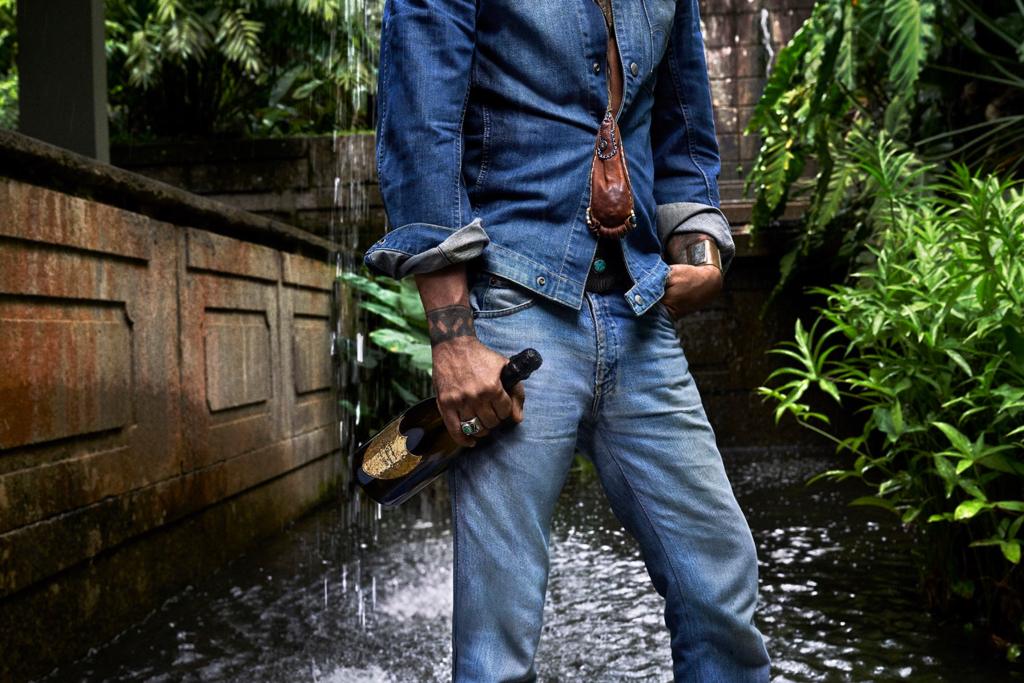 Are polymaths made or born?
I think it can be both – you can be born with certain talents but then also cultivate these things. I was not a photographer but I was always interested. My father knew how to shoot, being a journalist who reported in the Vietnam War. I loved it, I understood it, I had an eye for it but I didn’t know how to use a camera properly. So I learned. I was being shot by great photographers so I became friends with a bunch of them, and said to them: “Show me, discuss the concept of light with me…” You can’t be taught how to have an eye but I learned the technical stuff. It was within me but I had to cultivate.