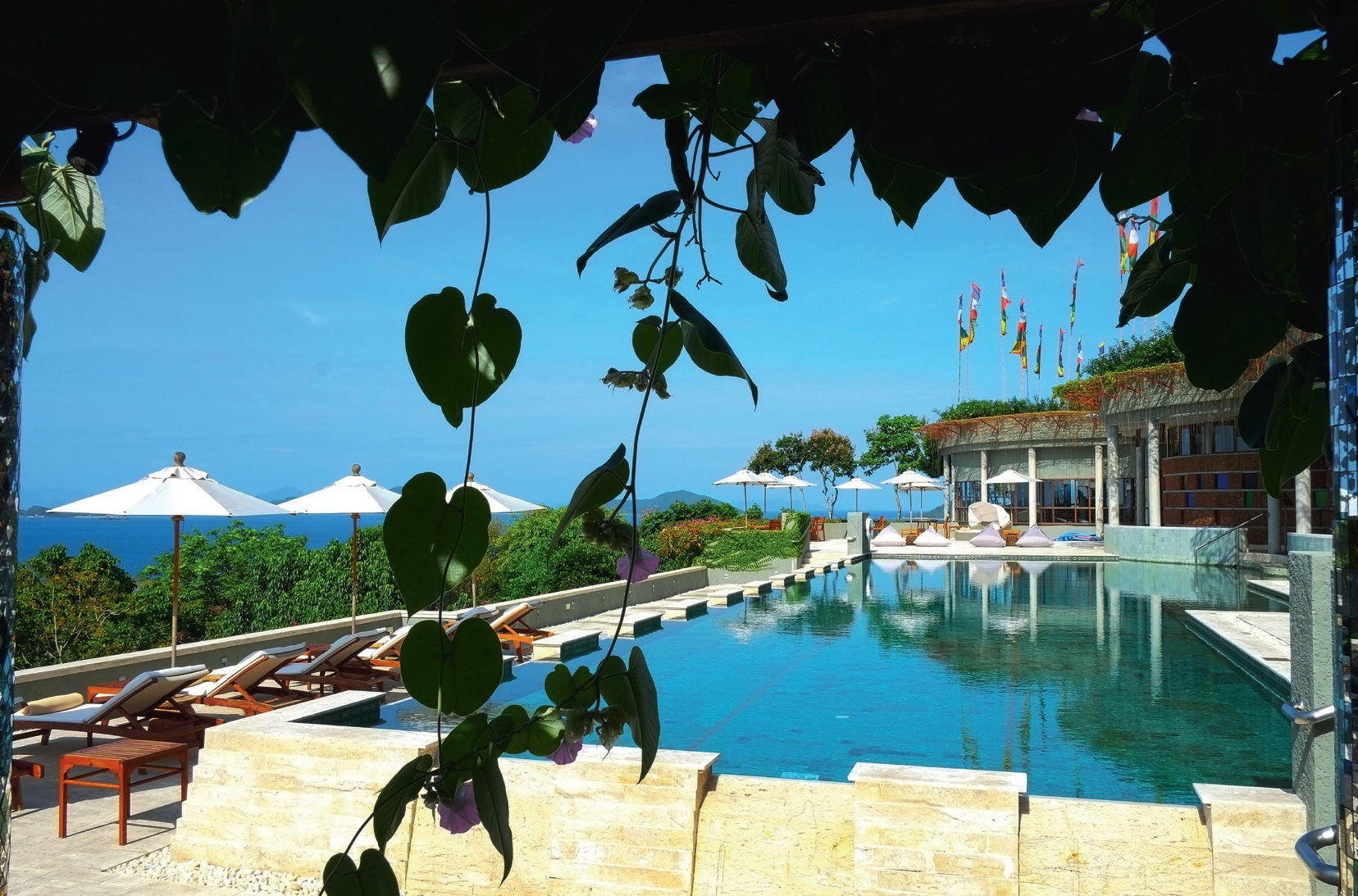 The man sitting at the next table is reading a book titled *Designing Your Life: How to Build
a Life that Works for You.* Such flagrant reading of self-help literature at dinner might seem incongruous … but not at Kamalaya, on Thailand’s Koh Samui. After all, many people end up at the retreat because their life has become unworkable in some way; food, booze, sugar, work,
digital connectivity. Others are facing more serious upsets in the fabric of their existence, such as divorce, the loss of a job, the death of a parent.

For all of them, Kamalaya is perhaps uniquely placed to help, bringing Buddhist traditions and philosophy together with holistic healing. 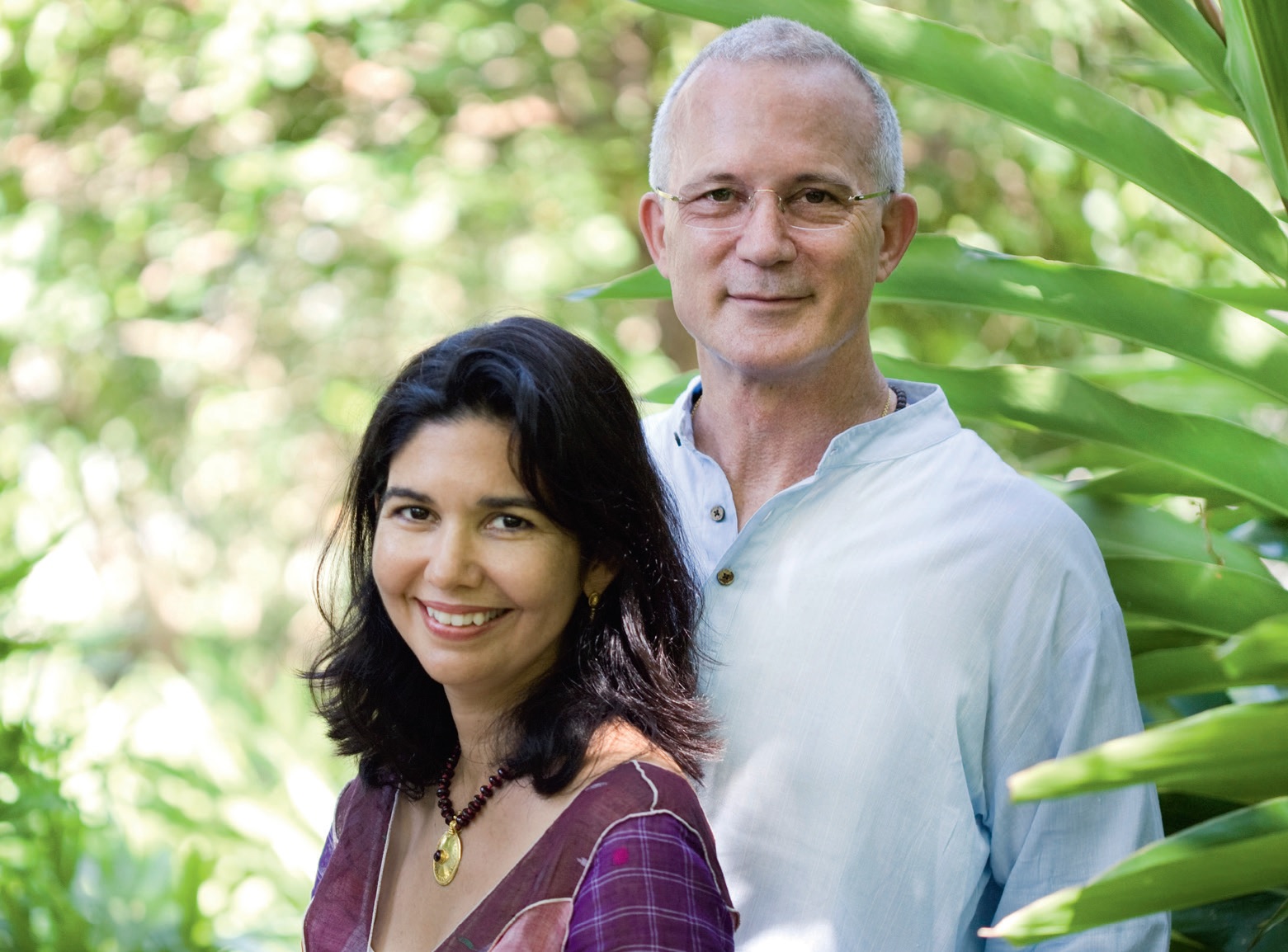 Co-founders John and Karina Stewart had envisioned just this marriage of their respective areas of expertise. Having served as a monk in the Vedic tradition for over 15 years, John met Karina at his ashram in India; she was visiting during her anthropology studies at Princeton University (she also has a Master’s degree in traditional Chinese medicine). A decade later, they were married and moved to Kathmandu, where John forged a successful career as a dealer in Asian art.

In the background, they nurtured a plan to create a wellness retreat that would go deeper than merely diet and exercise, to also rejuvenate the mind and the soul. 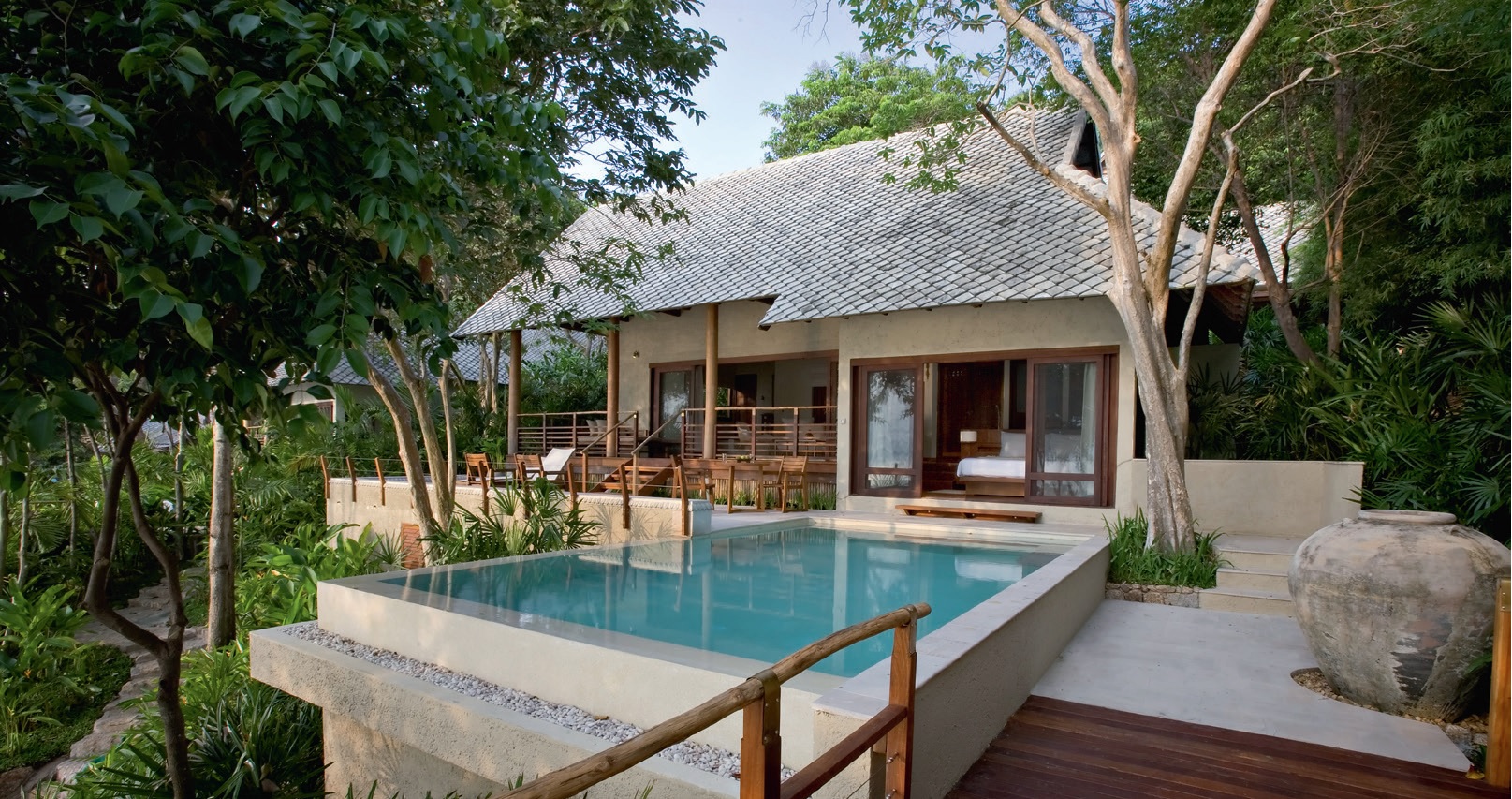 A beachfront villa with private pool

I certainly arrived at Kamalaya in need of replenishment. A frantic work schedule and the demands of three children had left me burnt-out and exhausted. My similarly worn-out husband, joining me for the retreat, had recently turned 50, so was in the midst of the inevitable reflection such a milestone brings. The Asian Bliss program, one of the retreat’s stress and burnout programs, seemed an obvious choice for me, while my husband chose Optimal Fitness. 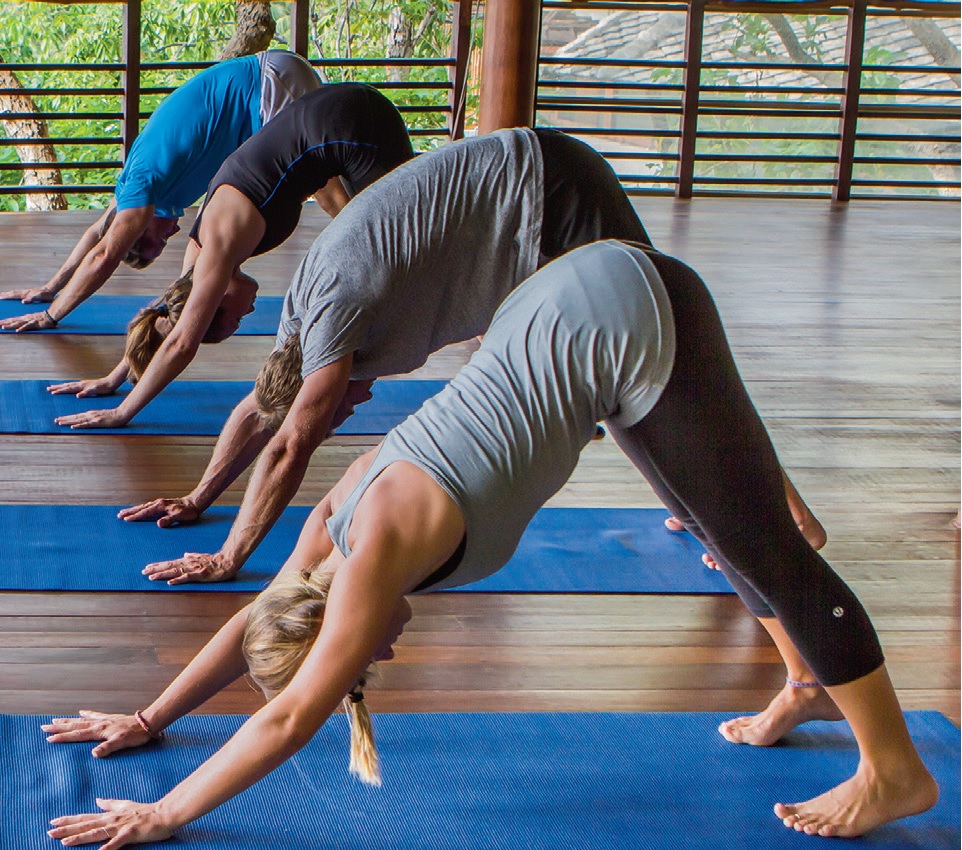 Our wind-down began as soon as the humid warmth seeped into our bones. A swim in the landscaped pool near the beach was followed by lunch in the nearby Amrita Café, one of two restaurants at the 75-room retreat, accompanied by a selection from the dizzying array of juices, elixirs and herbal teas on offer (the Kamalaya Detox Juice, blending pineapple, coconut water and holy basil became a firm favourite).

A wellness consultation and my first treatment followed – a 90-minute traditional Thai massage with a herbal compress, in an open-air massage room with a view of the ocean. All around I could hear birds in the trees, even as an afternoon thunderstorm rolled in, bringing the soothing thrum of rain falling outside.

From all corners of Kamalaya, you can see the ocean and hear the sound of water running, glimpse Thai spirit houses, and marvel at the tropical gardens. The Asianinspired buildings, designed by Australian architect and artist Robert Powell, seem as though they are sinking into lush greenery, vivid flowers and even ancient granite boulders (around which they have been
carefully constructed). The environment is a key part of the experience. 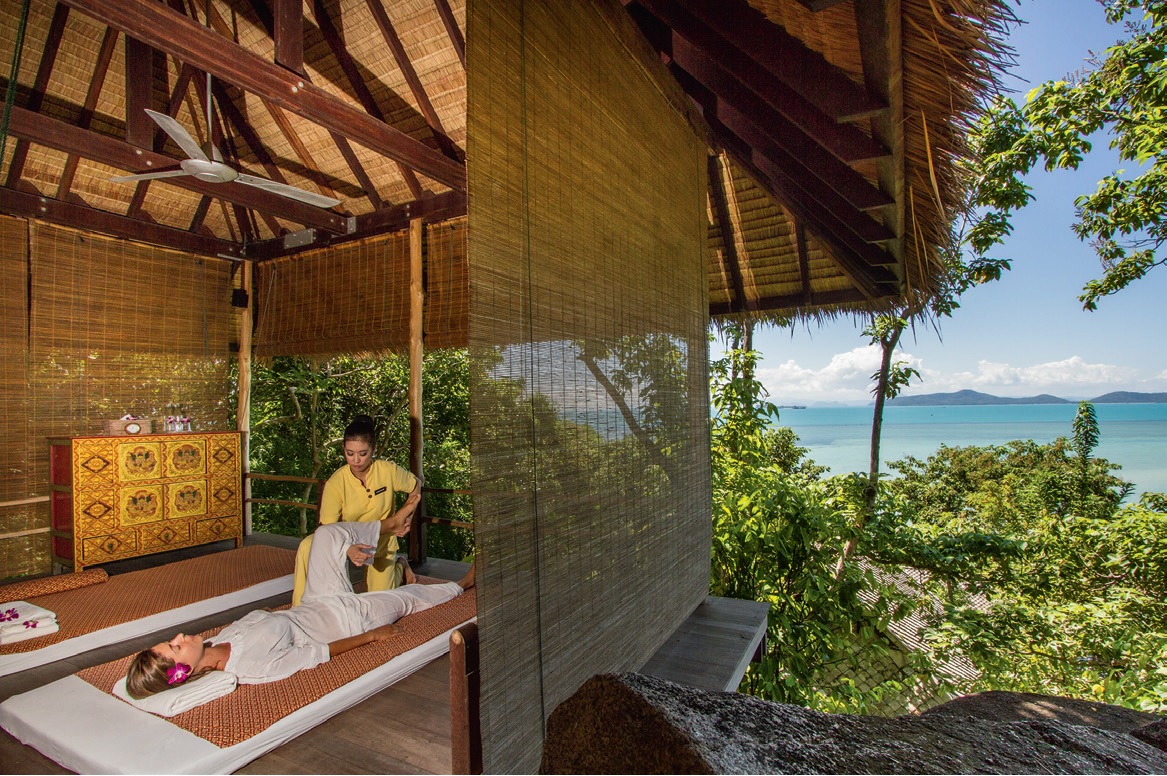 “Most people live in cities, and often we look at nature from a distance, but we don’t actually get in it. We have tried to create a Garden of Eden with this interface with nature, because nature is the first part of healing,” John says.

John was himself recuperating from illness on Koh Samui when he discovered the site for Kamalaya. He and a friend were making their way to a quiet beach, hacking through the jungle with machetes, when they stumbled upon a cave.

“I felt like I was spoken to; it called me into the cave,” John says. “It was obvious it was a holy place – there were leftovers of incense and dried flowers and mantras written on the cave walls. There were statues of Buddha.”

He called Karina to let her know that he had found the location for their retreat. As an ancient Buddhist holy site, the hillside overlooking the sea and neighbouring islands was a perfect place for their vision to come to life. 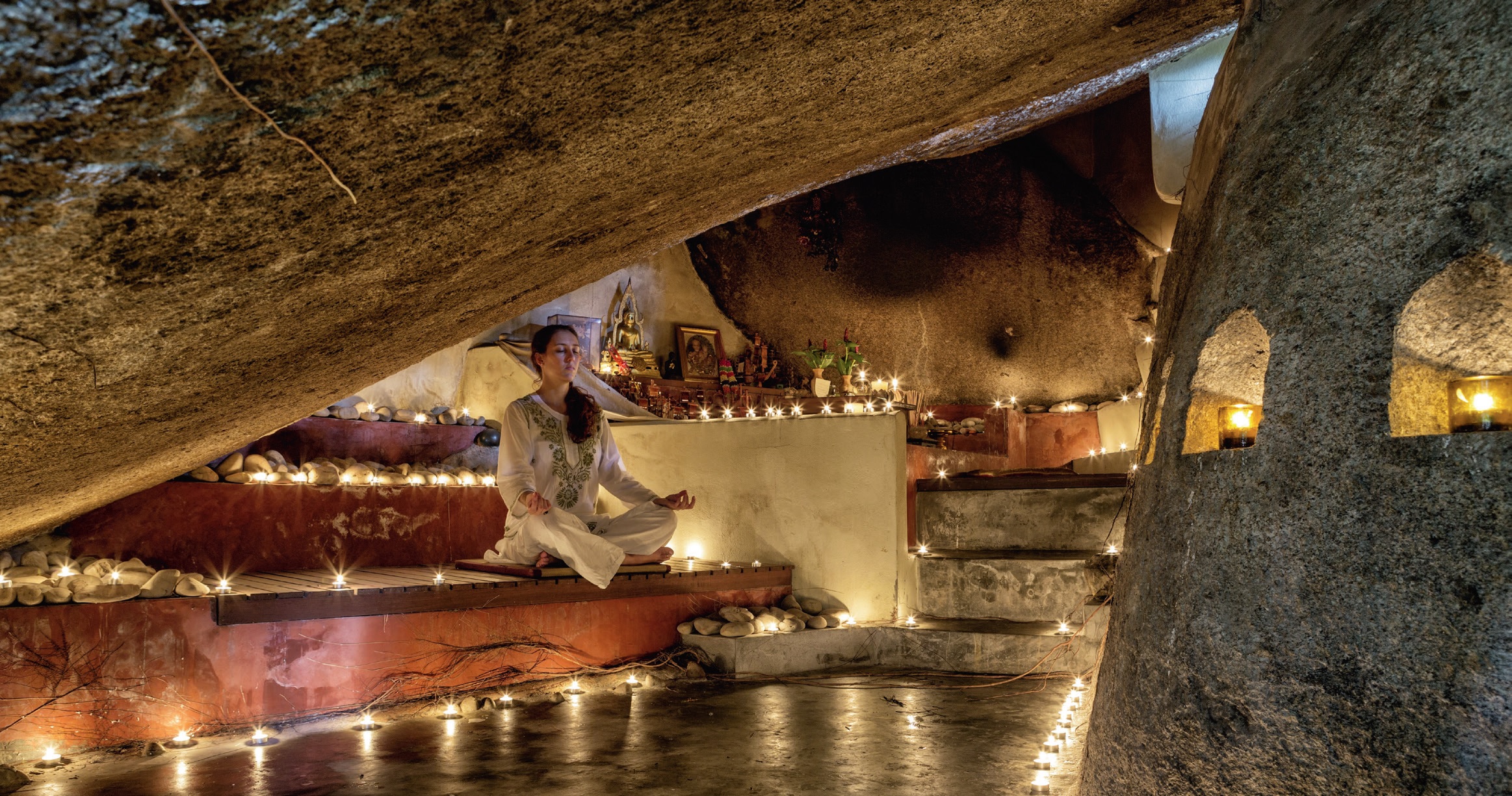 The cave, still preserved as a sacred place, is literally underneath the Wellness Sanctuary at Kamalaya – the ‘nerve centre’ where more than 100 of the retreat’s 350 staff work across a variety of modalities, from fitness to massage, naturopathy, traditional Chinese medicine and Ayurvedic medicine.

A hallmark of Kamalaya’s approach to wellness is choice. The Stewarts didn’t want to force their guests into a rigid, prescriptive regimen.

It’s an approach that has been very successful. Since Kamalaya was established 12 years ago, it has been highly awarded, recently being named Worldwide Health and Wellness Destination of the Year at the World Spa and Wellness Awards.

Perhaps most telling is the number of guests who return: around 40 per cent are repeat visitors, some many times over. Also unusually, over 30 per cent of Kamalaya’s visitors are men, often attracted by the efficacy of the retreat’s popular detox or stress and burnout programs.

“They have often been told by a doctor, or a friend, or a family member, that they need to make some changes. Sometimes it’s weight loss, sometimes it’s habits like drinking too much. Men know when they have gone a bit over the edge and need to reframe their habits,” Karina says.

Increasingly attracting guests are a new ‘embracing change’ program and small group retreats, designed specifically for those going through times of transition and looking to explore how they can transform emotional and psychological habits “to better use their mind as an ally, rather than an opponent”, Karina says. These programs offer the most contact with Kamalaya’s
Life Enhancement Mentors, specialists in the mind-body connection who have each spent at least 10 years in monastic life, typically in the Buddhist tradition. 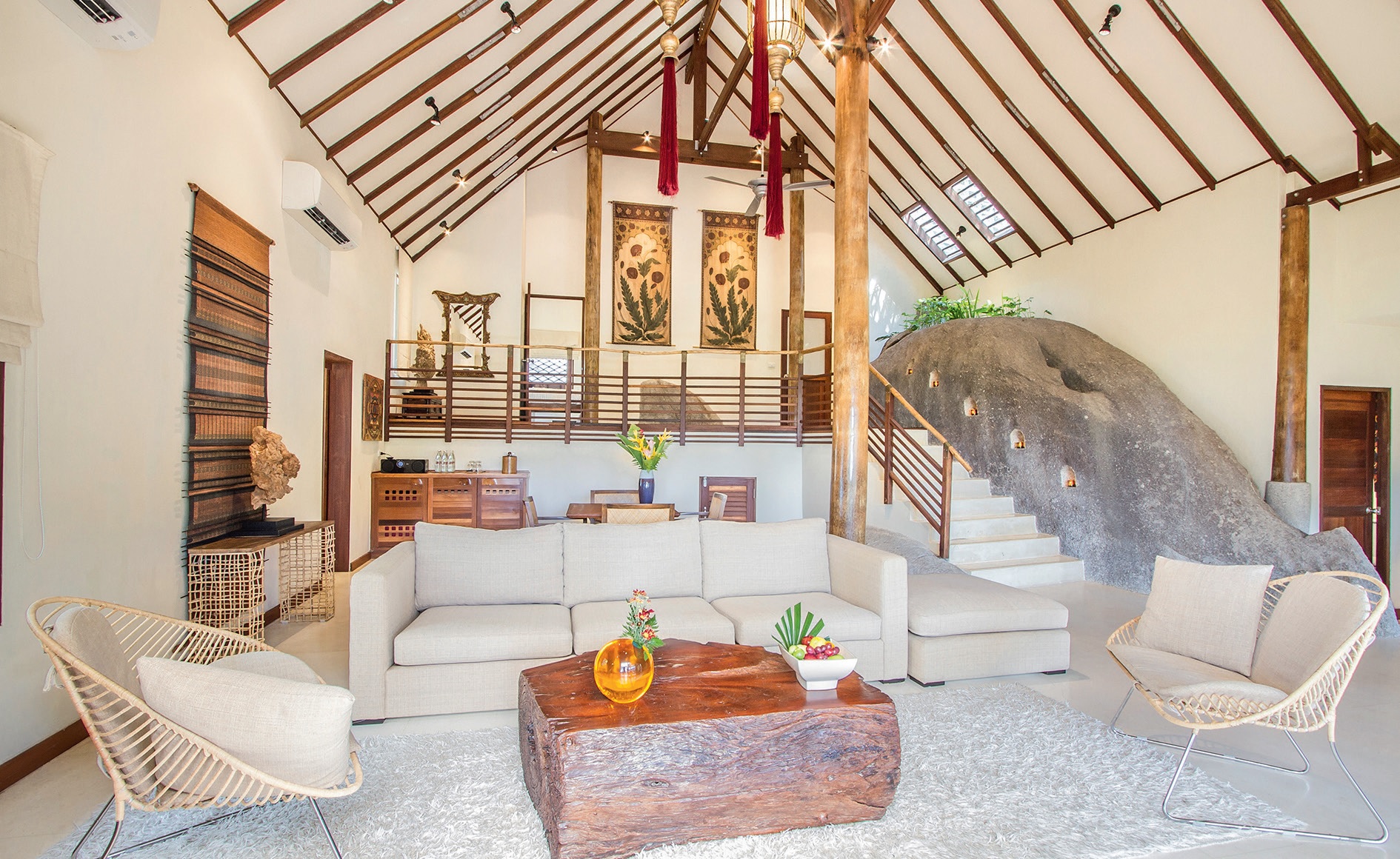 Granite boulders are incorporated into the architecture, seen here in the Rocktop Villa

Even outside these programs, the effect of taking guests out of their hectic lives into a jungle oasis, removing the distractions of the digital world (devices are discouraged in common areas, and wi-fi is not freely available), and calming the nervous system through healthy food and juices and an abundance of treatments (two a day is typical of the Kamalaya programs), is
inevitably an instructive reflection on life.

“There is less and less time for the moments in which you think about your life. People get very successful, and then they also feel that something’s not quite right, and they don’t know what it is, so they start looking. Kamalaya is a safe entry point – you come for your health, you come for your exercise, but you also might find something more,” John says.

“Our lives are very full and very satisfying, but sometimes we realise that we have veered off course – the decisions were so small along the way, that all of a sudden you realise that you started in one place and ended up somewhere completely different,” Karina adds.

“I think it is simply a matter of overstimulation, so it is very difficult to maintain that inner compass. This is an opportunity through the physical, mental, emotional to recalibrate our life direction.”

One guest who made a significant major shift after a visit to Kamalaya was Philippe Joubert, who was then CEO of energy multinational Alstom, with responsibility for hundreds of thousands of employees. Already thinking about making a change, Joubert left his job to become an advocate for building sustainability into business strategy, and was one of the driving forces
behind the Paris climate summit. On one of his regular return visits recently, he gave a talk on how business should be the first line of defence in saving the planet.

“It was an extraordinary success several of the CEOs who were guests came to see him afterwards to ask which mentors he worked with, how did he come to that decision, and share that they also felt like they were at that place in their lives and wanted to make a change,” John says.

Certainly after a short time at Kamalaya, I found it easier to get some perspective. Days filled with yoga – in an open-air sala with stunning ocean views – meditation, qi gong (a holistic breathing and movement technique), time in the pool or steam caverns, workshops, fitness sessions and treatments of every kind (including a stimulating Royal Ayurvedic massage that left me pumping with energy) zapped stress.

Guests can choose to eat from either a detox or regular menu, but even the latter steers clear of dairy, sugar, salt, fat and additives, instead focusing on fresh, organic food, served as close to its natural state as possible. I dabbled in the detox menu, which is based on the principle of detoxifying and nourishing the body through food, rather than fasting, and included a delicious mung bean risotto (words I never thought I would write together), a dandelion-based detox coffee, and virtuous shots of wheatgrass and a ‘brain tonic’ (gotu kola, turmeric, ginger and coriander).

At the end of our five-day stay, I felt restored, lighter and more energetic – and nervous about re-entry into ‘normal life’. For my husband, sessions with a personal trainer and in the far infrared sauna had done their job, shaving four centimetres from around his body (even with a few beers during the week, which is still on offer to non-detox guests, as well as wine and coffee). Over the weeks after our return, realisations about things we wanted to change slowly came to the surface.

“When you are under stress, you can become addicted to the intensity of it, so you feed it. Once you take people out of their daily habits, and give them something to do so that they’re busy but it’s different, everything changes,” John says. “People automatically start to look at the world in a different way. When we built Kamalaya, we created it to be that sort of place – it’s just a different world that you walk into for a little while.”