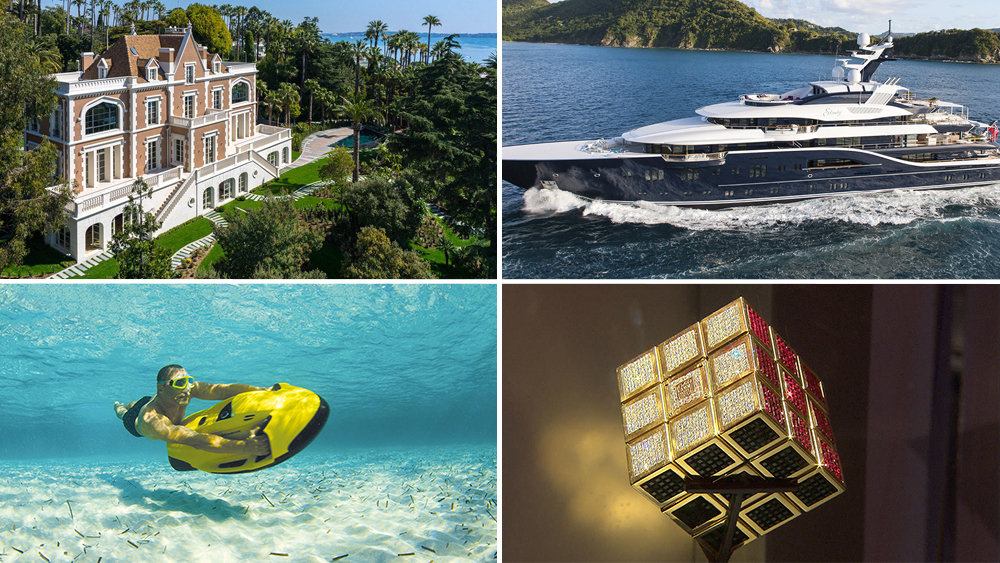 ‘Amazon for millionaires’ has everything from private islands to superyachts.

Despite its moniker, Hush Hush is making some serious noise among the well-heeled shoppers of the world. Billed as the Amazon for millionaires, the retail platform is full to the brim with top-tier luxury products and experiences that typically sport a seven-figure price tag.

The site also offers a concierge-style personal shopper service to ensure you never miss out on the big-ticket items you’ve been coveting. In short, the team will work to find whatever you desire, no matter the cost or exclusivity.

From multimillion-dollar superyachts to your own private island, we’ve curated 10 of the most elaborate rarities currently on the site to give you a taste for the bonkers range of products. You know, in case you have a few mil to burn.

Delivered in 2013, Lürssen’s Solandge is a luxurious 85-metre superyacht designed for global adventures. Spanning six decks, the generous vessel accommodates up to 16 guests across eight cabins, plus a crew of 29. Naturally, it has pretty much every amenity you could ever want or need.

A Private Island in the Florida Keys: Approx. $127 Million

This private island goes by the name of Pumping Key and is located in the tropics of Card Sound Bay in the Florida Keys. Spread across 26 lush acres, it can be your very own tropical oasis. The island is a 10-minute boat ride from Key Largo or a 10-minute helicopter ride from Miami’s South Beach. Best of all, it has an airstrip for your private jet.

Over the past year or so, private travel has become even more appealing. Hence, a top-flight personal aircraft is a must. This Boeing business jet can accommodate 18 passengers and the requisite crew to get you and your friends safely across the globe. It also features a large lounge, dining/conference area, and a master suite with a double bed and bathroom.

A Mansion on the French Riviera: Approx. $83.7 Million

First unveiled in 2014, the $73.7 million Graff Hallucination watch is considered to be one of the most expensive timepieces on the planet. Like a piece of high jewellery, it’s adorned with 110 carats of rare multi-coloured diamonds. Hallucination, indeed.

This is no ordinary brain teaser. The Masterpiece Rubik’s Cube is crafted from 18-carat gold and adorned with 185 carats of rarified stones, such as emeralds, amethysts and rubies. It works, too, if you dare to play it.

Need a little fresh air? Why not opt for the very best. This bottled oxygen comes straight from Mount Everest and is said to boost your health and happiness.

As its moniker implies, David Webb’s “Zebra” bracelet is a luxurious tribute to the four-legged animal. It features black and white striped enamel that’s mounted in 18-karat gold and platinum. To top it off, the wrist candy is fitted with 100 diamonds weighing 3.91 total carats and two rubies weighing 0.87 carats.

The Crystal Ergoripado is one of the easiest ways to add a touch of glitz and glamor to the most mundane of tasks. Easily one of the most luxurious vacuum cleaners in the world, it’s adorned with no less than 3,730 Swarovski crystals. Now that’s what we call bling.

Who doesn’t love a good jet ski? But even better? One that goes underwater. This Seabob F5 S is considered to be the ultimate high-performance underwater craft. Tipping the scales at just 35kg, it comes with six different power levels that allow you to really tear it up beneath the waves.