Buffalo Trace Waited Over 40 Years For This Rare Bourbon

Only 240 bottles of the prized whiskey are available worldwide.

It’s a bourbon 41 years in the making, but its journey to the bottle was far from a straight path. The Last Drop Distillers has just released an ultra-rare Buffalo Trace whiskey that was distilled nearly half a century ago, and it has a backstory that is as equally complex as its touted flavour profile.

The whiskey in question was first distilled and barreled in 1980 at what was then the George T. Stagg, under the watch of legendary master distiller Gary Gayheart. It would be his apprentice, Buffalo Trace’s current master distiller Harlan Wheatley, who would uncover the juice years later.

In 1992, Sazerac, the parent company of the Last Drop and Buffalo Trace, acquired the Kentucky distillery and all of its contents, including these prized barrels. The bourbon quietly matured for another eight years, gaining greater complexity, before it was vatted into stainless steel in the year 2000 at the ripe age of 20. This was done to halt the aging effects of the barrel on the spirits, which can result in astringent, woody flavours. See, this was before the bourbon boom made older whiskies a thing and now even Buffalo Trace itself is trying to make spirits aged 35 to 50 years. 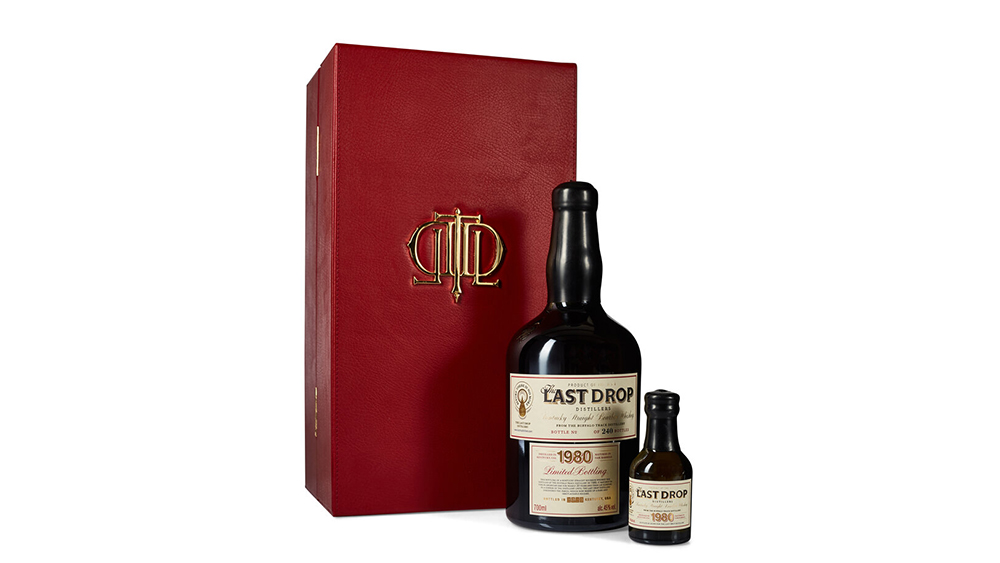 Only 240 bottles of the rare bourbon are available worldwide. The Last Drop Distillers

It’s worth noting that putting a pin in the aging process doesn’t necessarily mean that the spirit’s tastes and characteristics will stop evolving. In fact, Sazerac and the Last Drop believe the four-decade maturation has produced one of the finest bourbons ever made. Think of it like this, the bourbon is a 40-year-old at heart, even if has to go by the 20-year-old name.

As for flavour, the Last Drop says the 90-proof bourbon is the definition of flamboyant, with an orchestra of flavours.

“It transforms miraculously from a dark chocolate, almond, leather, caramel and oak to a gentle warming spiciness, concluding with a virtual symphony on your palate,” the distillery said in a press release.

The 1980 Buffalo Trace is one of three highly coveted spirits released within the Last Drop’s 2020 Autumn Collection, which also includes a 43-year-old Jamaican Rum and a vintage Cognac from 1959. Only 240 bottles of the rarity are available worldwide and priced at approx. $5950 a pop.