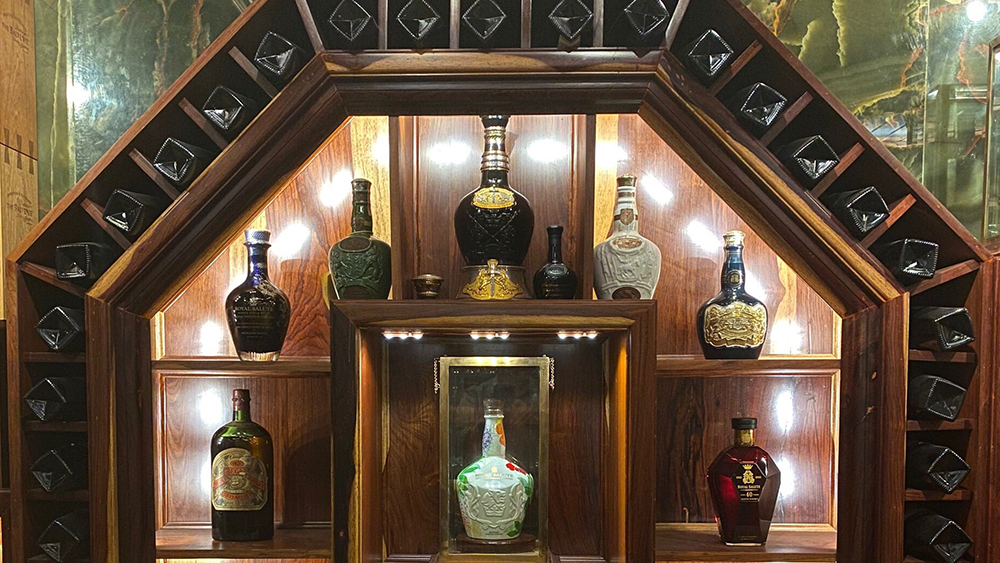 The 583-bottle stockpile is the world’s most valuable.

Chances are you’ve never heard of a quiet, unassuming 50-year-old Vietnamese businessman named Viet Nguyen Dinah Tuan. But if you’re a whisky collector, you probably know about Macallan’s Fine & Rare Collection—periodic, extremely limited offerings of some of the Speyside distillery’s rarest and oldest single malts. And if you’re really a staunch fan of collectable whiskies, you may also have heard about the Springbank 1919 single malt, which was released in 1970, with only 24 bottles produced. On October 24, 2019, one of those 50-year-old cult classics was auctioned off by Sotheby’s in London for a record-breaking price of approximately $420,000—making it the most expensive bottle of Springbank ever sold.

Tuan just happens to have one of those bottles. In addition, he owns the world’s only complete set of the Macallan Fine & Rare Collection, including the very first release—a 1926 vintage of only 40 bottles—of which 12 bottles were affixed with signed and numbered labels designed by Sir Peter Blake (the artist who created the Sergeant Pepper’s Lonely Hearts Club Band album cover for The Beatles) and another 12 bottles with labels designed and signed by Italian graphic artist Valerio Adami. As a point of interest, in 2018 one of the Adami-designed bottles sold for $1,600,000, thereby establishing a world record at the time for the most expensive single bottle of whisky ever sold at auction. Tuan’s owns both the Blake and Adami signed versions of these bottles.

These ultra-rare whiskies are only part of Tuan’s 535-bottle collection, which has recently been valued at $20.6 Million and certified by Guinness World Records as the most valuable whisky collection in the world. Although other whisky collectors may own a greater number of bottles, no one else has amassed as many bottles of whiskies that are collectively worth as much at Tuan’s, as verified by Sotheby’s London experts, based on realistic “open market” UK auction hammer prices. The value as well as the authenticity of each bottle was also independently confirmed by Rare Whisky 101, a respected international whisky brokerage and investment service.

“We have the world’s largest database of recorded UK whisky auction prices, so it’s relatively straight forward,” says Andy Simpson, co-founder of Rare Whisky 101. “There were also two or three truly unique, ultra-rare bottles, so we used our experience and detailed knowledge of the rare whisky market to provide an accurate open market value for these.”

The Macallan Fine and Rare Collection Courtesy of Sotheby’s

This collection is even more remarkable when one realizes Tuan has been collecting rare whiskies only since 1996. That was the year he walked into a liquor store and spotted a lone green porcelain flagon of Royal Salute 21 Year Old, an annual limited-edition blended Scotch that was originally created in 1953 to commemorate the coronation of Queen Elizabeth II.

“It was the owner of the whisky store who suggested I might like to take a look at that bottle,” Tuan says. “When I saw it, I fell in love with it and decided I would buy it then and there. I certainly didn’t realize I would end up creating a world-class collection. Today my collection includes single malt Scotches, blends and Japanese whiskies. Some of the highlights include one of only 12 bottles of Bowmore 1957, the oldest the distillery has ever released. It also happens to be the most expensive Islay single malt in the world, with a similar bottle fetching $580,000 (hammer price) at auction recently.

“When it comes to Japanese whiskies, I have a bottle of the 52 Year Old Karuizawa 1960, the legendary whisky that was sampled by former malt master Osami Uchibori. I also own a bottle of Yamazaki 50-Year-Old, the rarest and oldest Japanese single malt whisky of all time. But my favourite is the Springbank 1919.”

To verify the authenticity of Tuan’s collection, hi-resolution images of each bottle were examined by Rare Whisky 101, and included close-ups of the bottle closures, labels and overall condition of the bottle itself, as well as anything else that caught the brokerage’s scrutiny. If more examination was required, a more detailed image of that particular area was analyzed. Amazingly, considering the popularity and monetary values involved with whisky collecting today, only one counterfeit bottle was uncovered. It was immediately disqualified and not included in the final bottle count. And he’s not done adding to his collection yet.

“I’m really looking for rarity rather than value,” says Tuan,  “although of course, the rarer the whisky, quite often the more expensive it is. I also enjoy the aesthetics of a beautiful-looking whisky bottle, so I’ll often look for rare and interesting artwork on the labels. I spend a lot of time looking through online whisky auctions, visiting whisky stores and even speaking to brokers, such as Rare Whisky 101, to see if there are any rare and vintage bottles coming to market. After receiving the Guinness certification, I feel very proud of my collection and will continue to develop it further.”

As might be expected, Viet enjoys drinking as well as collecting whiskies, and his favourite drams include the Macallan, Dalmore, Bowmore, Balvenie, Glenfiddich and Glenfarclas. But none of these will be poured from the precious sealed bottles that are on display in a secure, customized whisky lounge in the basement of his home.

“I love drinking whisky,” he says “but I’d never touch any of the bottles in my collection.”