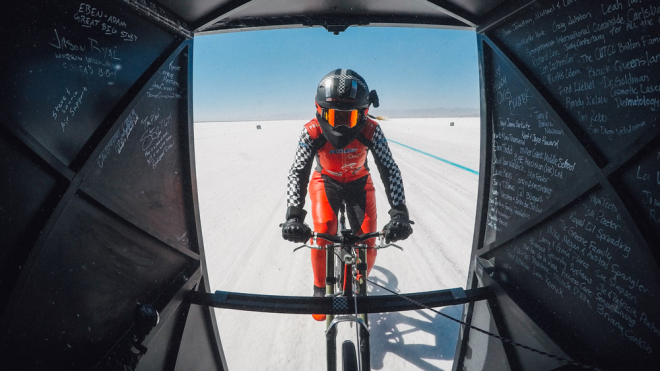 The record-breaking speed demon takes a breath to talk visualisations, victory, and “the crazy factor.”

There are adrenaline junkies, and then there is Denise Mueller-Korenek whose inner drive is faster than a jet plane at takeoff. On September 16, 2018, the 45-year-old mother of three and elite athlete from Valley Center, California, shattered the existing bicycle land-speed record of 268.7km/h by hitting a mind-blowing 295.983km/h on her custom carbon KHS bicycle at the barren and blindingly white Bonneville Salt Flats in Utah.

“Sometimes when it comes to reaching your goals, the older you get the more focused you become,” says Mueller-Korenek. Two years prior at the age of 43, Mueller-Korenek had grabbed the women’s world record when she hit 237.7km/h with her pace-car driver Shea Holbrook, also no stranger to speed as a seven-time Pirelli World Challenge winner. To achieve a land-speed bicycle record, a cyclist drafts, or rides, in the slipstream behind a motor vehicle to minimise wind resistance. Mueller-Korenek’s bicycle, with its 2.1-metre elongated frame and extreme gearing, is tethered to the vehicle for about the first eight-kilometre race before she disconnects and takes over with her own power. In 2016, for the women’s record, she pedaled behind a highly modified Range Rover, but knew she needed more horsepower and sleeker aerodynamics if she was going to chase the men’s record. And to do that she rehabbed the same 160km/h dragster that Fred Rompelberg used when he set the 167 mph men’s record more than 20 years prior. But riding behind the dragster also meant a considerably greater risk with a smaller draft pocket, giving her just 116 centimetres of lateral room to maneuver her bike. 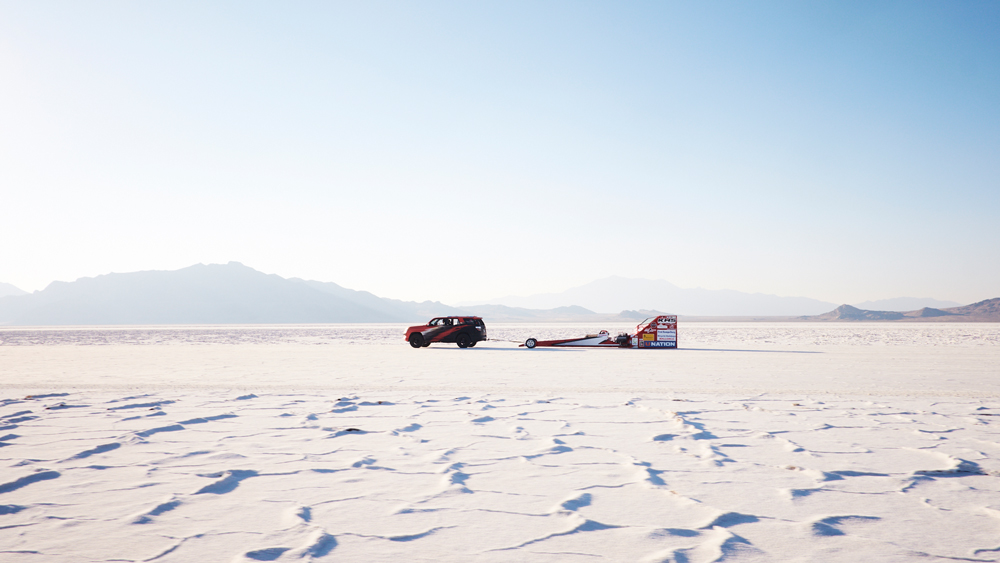 “With the Range Rover, Shea and I were so in sync. All that was left was to build on our experience and take it to the next level,” Mueller-Korenek recalls. “But everything changed with the dragster. First, we had so many challenges getting the car out there.” Since the car had been sitting for 23 years, it had to be reconditioned, including several last-minute searches for rare parts not to mention worrisome mechanical issues on the day of the race. “In 2016, I felt no fear. It was like an amusement-park ride, very exhilarating and safe,” says Mueller-Korenek. “2018 was actually terrifying. I’m holding on for dear life and praying I stay upright.” 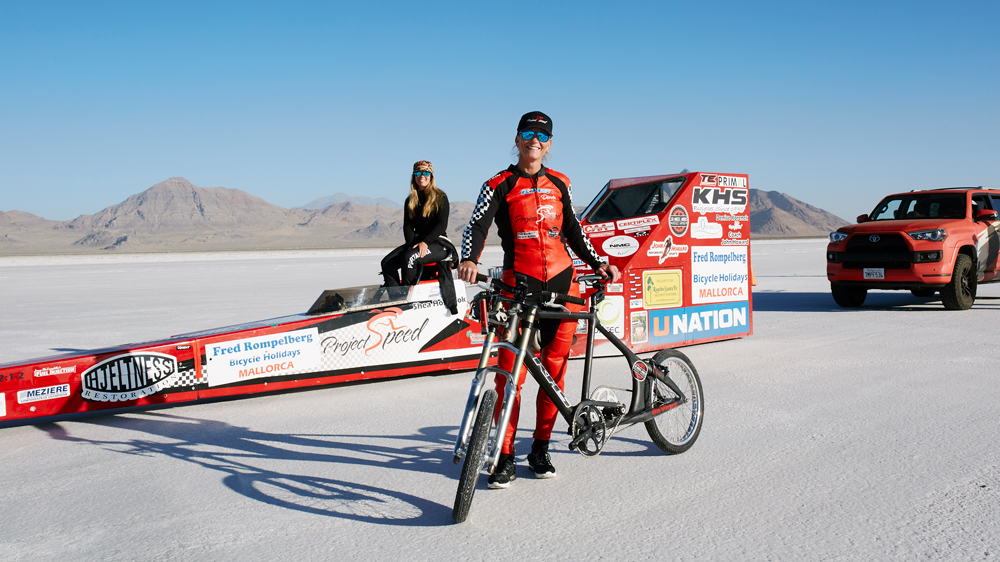 So how does it feel to hit 300km/h on a bicycle? “I feel the speed only because it gets to be louder and louder because of the wind and the vibration gets rougher and rougher,” she says. “But I have no idea how fast we’re going. There are no visual reference points out there, not like when you’re driving on a road with other cars or seeing how fast street signs flash past. I’m big on visualisation, so in that moment I’m visualising the end of the race. Visually, I’d already done it 10,000 times in my head.”

In fact, the mental aspect is a key component to her success. Following her 2016 race, she was experiencing high levels of stress and sought out neurofeedback training to help her prepare. “Physically a lot of cyclists can do this, but being mentally prepared to handle it is the challenge,” she says. “I call it the crazy factor!” 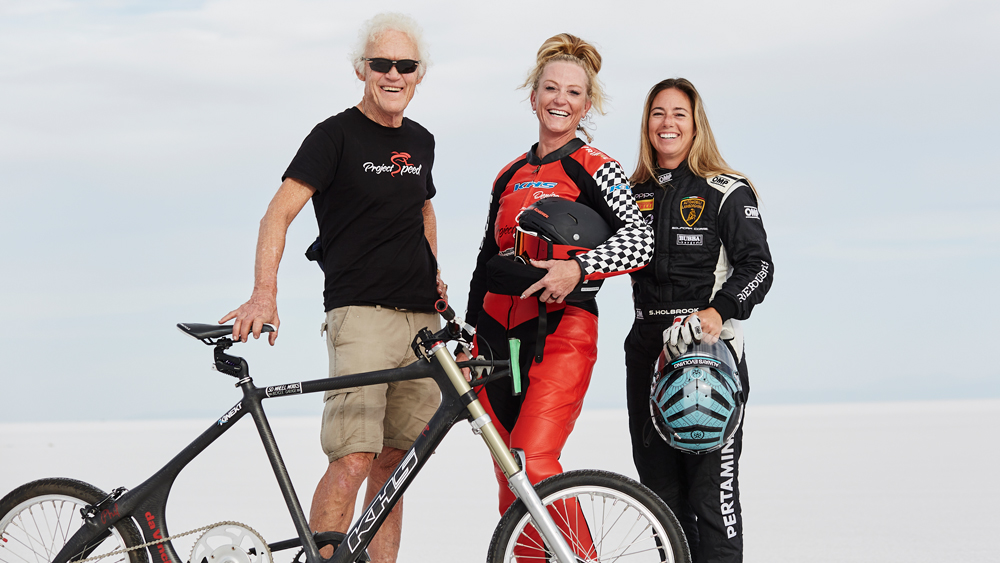 And crazy, she jokes, is something of a family trait. Her father, ultradistance cyclist Myron Mueller, signed her up for a 160-kilometre charity ride when she was 14—her first race ever. It was on the last day of this ride that Mueller-Korenek saw three-time Olympian John Howard fly past on his bicycle. “I jumped on his wheel, and it turned out I was drafting behind my future coach!” she says, laughing. As a junior cyclist, she went on to win 13 national championships in road-, track-, and mountain-bike racing. Now, as the mother of three grown boys she says, “We all have a bit of crazy in us, and this goes back to my parents. My dad celebrated his 70th birthday back in 2002 by biking more than 19,000 kilometres around the perimeter of the United States. My mum raced powder-puff demolition derby in the ’60s, and then four years ago for her 80th birthday jumped out of a plane for the first time, so that tells you a little about her heritage. One of my sons ran 19 half marathons when he was 16 and we thought nothing of it. That’s our normal.”

And when your normal is every other person’s unimaginable, it’s clear that nothing is going to slow Denise Mueller-Korenek down.