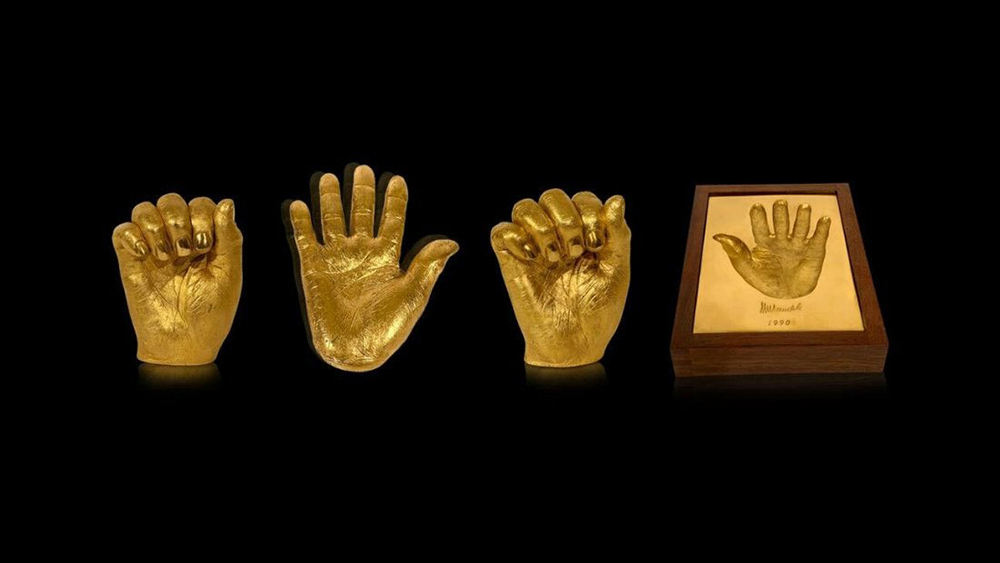 If anyone deserves a big hand, or four, it’s him.

Nelson Mandela changed the world with his own two hands. So it’s only fitting that replicas of his powerful palms would sell for millions, especially when crafted from solid gold.

Captured by a team from Harmony Gold—one of South Africa’s premier mines—the detailed castings tell the story of one of the most celebrated, respected and beloved men of our time. From his unique fingerprints to the scar he sustained while imprisoned on Robben Island, each piece is unequivocally profound.

The collection includes two powerful fists—one is inscribed with “1964,” the year Mandela was first imprisoned; the other “1990,” the year of his release—as well as an open palm and one full hand impression set. Each piece is engraved with the legend’s signature and weigh between 2.1kg and 4.2kg.

Snapped up by an international buyer, the coveted castings were created in 2002 to raise money for the Nelson Mandela Children’s Fund and are believed to be the only such sculptural works in existence. After Mandela was released from prison, thousands of pieces of art bearing his name flooded the market and a high number were fakes. Under Mandela’s own orders, many works were destroyed, so these hands are extremely rare.

“We’re thrilled that a single buyer was able to bring all four of the gold casts together again,” says Arlan Ettinger, owner and co-founder of Guernsey’s. “This collection is as beautiful as it is significant, and it was an honour to be part of such a historic moment.”

A figurehead of modern democracy, Mandela dismantled the apartheid system, spread the spirit of freedom, equality and unity throughout Africa, won a Nobel Peace Prize and was the first black president. If anyone deserves a big hand, or four, it’s him.

Check out more images of the sculptures below: