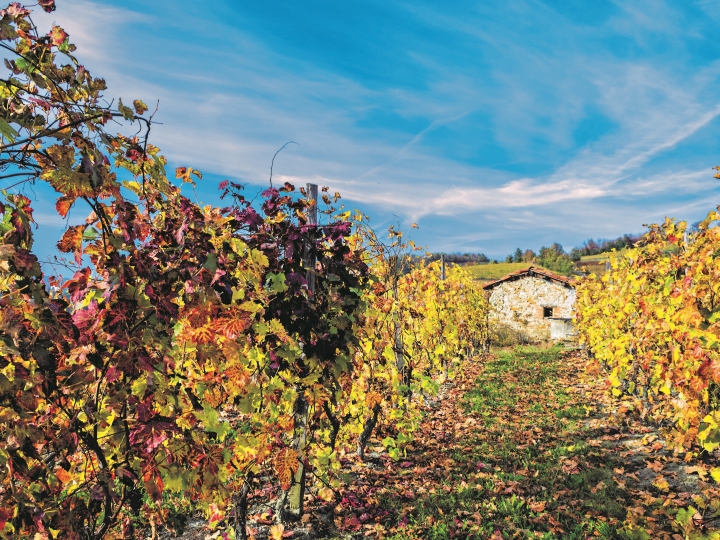 Nebbiolo from Italy’s Piedmont region and Australia’s Adelaide Hills is worthy of keeping company with the greats.

The high ground of luxury fine wine has been occupied by Champagne, red Bordeaux and white and red Burgundy for centuries. Nebbiolo has languished in the shadow of these giants, despite the fact that wines made from this grape easily tick all the boxes when measuring the greatness of a wine.

Balance, texture, intensity, food compatibility, regionalism and age-worthiness are all present and accounted for in Nebbiolo. Food loves it; it’s sexy with an almost moreish drinkability, it has a versatility that can suit any occasion, and for those patient enough, it can age for decades. Nebbiolo is fast becoming one of the world’s most in-demand red grape varieties for drinkers and collectors of fine wine.

Grown almost exclusively in cool climates, ‘Nebb’ has a structure and mouth feel that reminds many of Pinot Noir, just with the volume turned up a few notches. Nebbiolo is a huge tool-kit of texture and flavour, with loads of acidity and tannin wrapped around crunchy fruit character and a nicely long, savoury palate feel. The high concentrations of acidity and tannin that enhance Nebbiolo’s drinkability as a young wine also suit it to grazing on light, salty, fatty foods like aged or cured meats; antipasto-style vegetables; or firm, hard cheeses.

Those same levels of acidity and tannin also supply the stamina to age. Over time, the large moving pieces of fruit and alcohol are supported by acidity and tannin. When in the right proportions, the wine will evolve into a multifaceted, finely layered masterpiece of texture, taste and aroma. Wines with this kind of maturation need slow-cooked, rustic food like braises and stews, where age-softened tannins can meld with – and Nebbiolo’s signature acidity can cut through – the hearty, viscous food. Every wine has a spiritual home, a place where particular elements conspire. For Nebbiolo, it’s the Piedmont region in north-west Italy, where the stern, cooling influence of the Alps meets the temperate nature of the Mediterranean sea. The resulting local fog, called nebbia, gave the grape its name. While Turin is Piedmont’s official capital, the wine epicentre is the town of Alba. Sitting either side of Alba are the king and queen of Nebbiolo, the vineyards of Barolo and Babaresco.

There are marked differences between these two wines. Barolo is lean and long with tightly wound texture; Barbaresco has a rounder, smoother approach. Barolo is a sleeper and will generally need time in bottle, while Barbaresco will offer better drinking at a younger age.

Both, however, embody Nebbiolo’s ability to reflect the region or vineyard in which it is planted. Piedmont means “the foot of the mountain” and the vineyards that hug the hillsides have sunny days and cool nights that allow the long ripening periods necessary for Nebbiolo to mature on the vine.

Barolo and Barbaresco wines carry price tags to match their scarcity and reputation, not only in Italy but in fine wine circles globally. More entry-level Nebbiolo specialists are found in the larger region around Alba, and are characteristically labelled with the grape preceding the region (e.g. Nebbiolo d’Alba).

Australian drinkers enjoy a slight advantage with Nebbiolo. Outside of Piedmont, the best region for producing consistently good Nebbiolo (and at a fraction of the price of Barolo) is the high-altitude vineyards in the Adelaide Hills.

Take the tingly spine and skeleton of Nebbiolo and pin more fruit character, more weight and increased mouth feel to it. If you like full-throttle wines like Shiraz or Cabernet Sauvignon, you’ll find plenty of horsepower in these wines, too – just not with the same concentrations of sweetness, oak and alcohol.

These Australian wines won’t age as long as Barolo or Barbaresco, but these dry, fresh reds will reward you at the end of a tough day, or over a barbeque or any dining occasion where meat is cooked over fire.