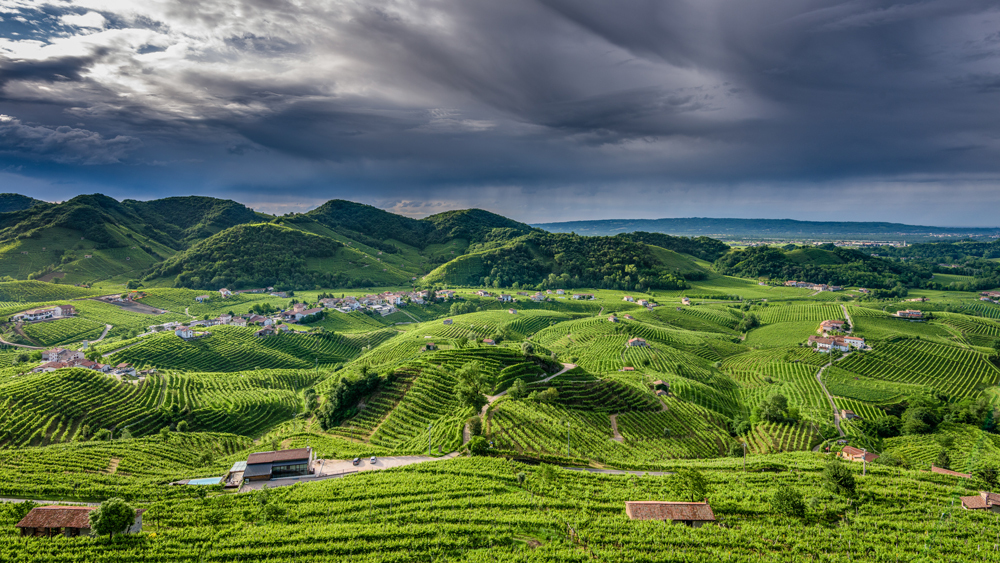 There’s more to Prosecco than you think

The best bottles from Italy’s northeast hillside shatter the stereotype of generic bubbly.

About 72 kms north of Venice, wrapped around the undulating, conical foothills of the Dolomite alpine range in northeast Italy, are vineyards so precipitously steep that it’s impossible to imagine driving a tractor through its rows. And the fate of even the workers who hand-farm these vines is seemingly equally treacherous. Dangerous farming aside, this insanely sloped and tilted wine region is achingly beautiful, and the bottles it produces are delicious and riveting.

The wine? Prosecco. But before you connect the wine from these hills with the sea of less-than-interesting bubbly by the same name in the supermarket—often too-sweet and altogether generic—know that the smaller-production, hand-farmed Proseccos from these distinctive slopes are a far cry from those bottles. These are complex, balanced sparklers, highly aromatic and full of beautiful fruit flavors. These are Proseccos worth a second look.

Before we go any further, it helps to know Italy’s system for categorizing the quality of its wine regions. In broad strokes, D.O.C. (Demoninazione di Origine Controllata) on the label means the wine has come from a defined appellation and followed the general rules there. D.O.C.G. (Demoninazione di Origine Controllata Garantita), on the other hand, means the wine has generally come from a smaller region, followed much stricter rules, been tasted for quality, and is guaranteed. Vineyards on the flatlands south of the hills described above, the bottles to look for are labelled Prosecco Superiore D.O.C.G. 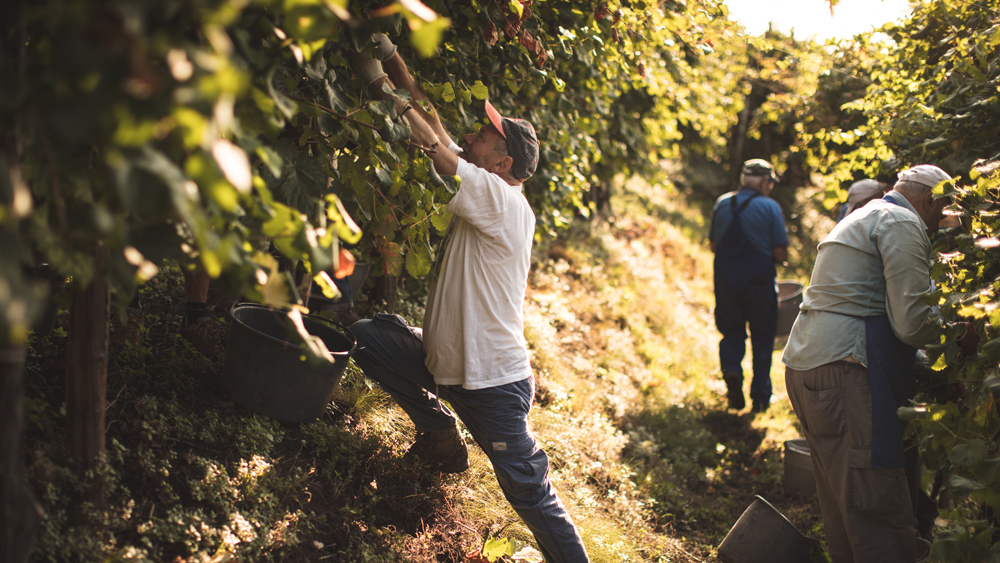 Harvest in the hills of Conegliano Valdobbiadene
Photo: Beatrice Pilotto

The entire name you’ll find on labels from this top region—Conegliano Valdobbiadene Prosecco Superiore D.O.C.G.—stretches the skill of any but the most adept Italian linguists. (The marketing gurus must have missed the committee vote on that one.) It includes the two main towns anchoring the stretch of vineyards—Conegliano, the cultural center, with a picturesque centuries-old downtown; and Valdobbiadene, the center of production for these high-quality wines, with handsome wineries in the vicinity open to visitors. Within the broader D.O.C.G. appellation, two higher-quality designations stand out because of their distinctive soils, exposures, and microclimates: Rive (meaning “slopes”; low-yielding vineyards, hand-picked, and always vintage-dated) and—drum roll for the Grand Crus of Prosecco D.O.C.G.—Cartizze (from the steepest, most sought-after hillsides).

Chalk this beautiful Prosecco up to one Antonio Carpenè, a chemist so passionate that he named most of his children after essential elements. In the mid-1800s, Carpenè saw potential for sparkling wine in the local white grape, Glera, and put it through the traditional Champagne method for making bubbly. As it turns out, though, the second fermentation in the bottle, which marks Champagne and other quality sparklers in the New World and Old, did no favors for Glera. Famously fruit-forward and aromatic, the wine was muted by the process.

Carpenè pivoted, then (to put a modern spin on his innovation), and began developing what came to be known as the charmat method of creating bubbles, whereby the second fermentation takes place in a large tank under pressure—an oversized autoclave, if you will—giving the carbon dioxide nowhere to go. And while this tank method is on some fronts seen as a less-expensive route to sparkling wine, in the case of Prosecco D.O.C.G., it’s a tool for “superior” wines, preserving freshness and aromatics. These aren’t wines to lay down. They’re meant to pop and revel in while they’re young. 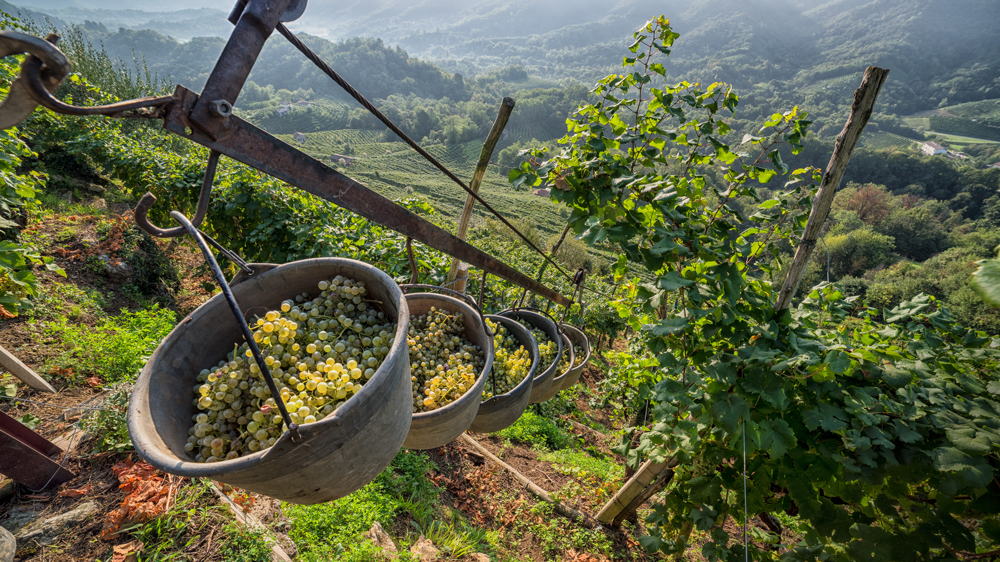 This year, Carpenè-Malvolti, in the heart of the town of Conegliano, is celebrating its 150th anniversary. And under the auspices of the fifth generation of the Carpené Family, the winery has just finished a remodel that juxtaposes ultra-modern spaces and technology against historic parts of the 16th-century building and glimpses of old riddling and bottling technology. It’s a fascinating snapshot across time—and a terrific intro to Conegliano Valdobbiadene’s beautiful wines. If you go, watch out for the 6th generation—she’s two years old, and already a sweet force to contend with around the winery.

Here are some bottles we wholeheartedly recommend:

Carpenè-Malvolti Valdobbiadene Prosecco Superiore D.O.C.G. “1868” Cartizze: While most wines from Cartizze are made in a slightly sweeter style, Carpenè has reined in the sugar slightly on this one and balanced it with bright acidity. A minerally opening leads to golden apple, exotic citrus (think lemon meringue) and pretty jasmine notes.

Carpenè-Malvolti Conegliano Valdobbiadene Prosecco Superiore D.O.C.G. “1924”: A new bottling for the winery, under a reprise of the 1924 label that first used the term Prosecco. Made in a drier style (immensely food-friendly), this one offers up florals in spades, with a minerality showing under apple and peach flavors, finishing in satisfying tones of bitter almond.

Mionetto “Luxury” Cartizze D.O.C.G.: The traditional sweetness of a Cartizze is balanced here with citrus; aromas of fresh apples and pears in the orchard lead to gently mouth-filling bubbles and a slightly nutty character.

Villa Sandi Valdobbiadene Superiore di Cartizze D.O.C.G. Spumante Brut “Vigna La Rivetta 2017: Earth and elderflower lead together into a beautifully dry (for a Cartizze) palate of fall apples and hints of nectarine, with a minerally edge and exuberant but elegant bubbles.