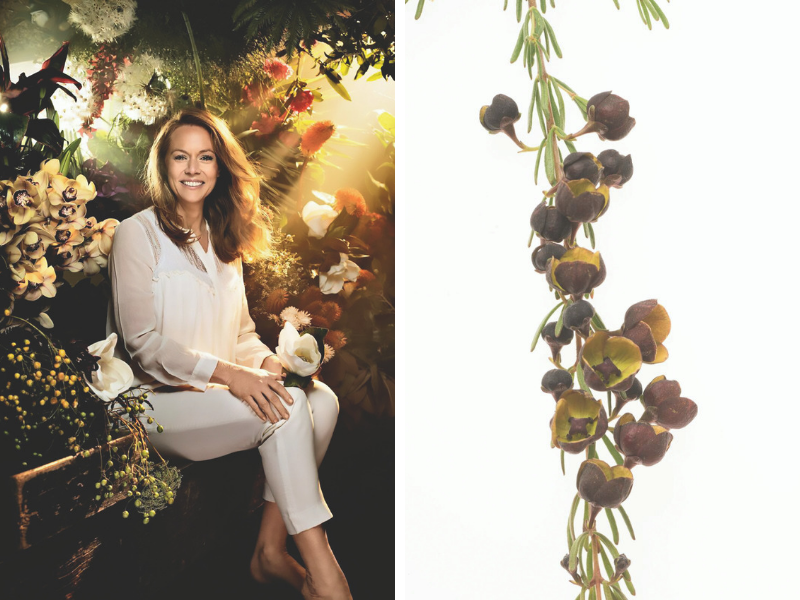 Native botanical is the base for a unique scent

Saskia Havekes has a grand ambition: to create a memento that is a poetic distillation of the Australian bush. For the Sydney florist who counts Hollywood stars, directors, couturiers, luxury brands, artists, beautiful brides and all manner of style mavens among her clients, Boronia megastigma is her botanical muse.

“It’s not an incredibly attractive flower,” acknowledges Havekes, floating like a butterfly among a profusion of floral orders in her tiny blossom-filled ‘cave’ in Sydney’s Potts Point, “but it absolutely packs a punch with its fragrance.” Boronia, says Havekes, is a very rugged little flower. “It has an enduring nature. And surprising potency.

”Pollinated by just one type of tiny moth, this little bell-shaped bush flower, brown on the outside and a golden mustard inside, is the essence of her new perfume, Boronia, created in collaboration with legendary French ‘nose’ Bertrand Duchaufour, who imbues the fragrance with hints of cassis, freesia and sunburnt hay. Havekes grew up in bushland in Sydney’s rural northwest. “We had a lot of those gnarly angophora gums, flannel flowers, pink boronia, eriostemon, red-throated egg and bacon plant, and mimosa,” she says of her childhood backyard.

“Every afternoon I’d walk down to the creekbed with my dog, boil the billy, make damper, and soak up the mossy scents of lichen, tadpoles, ferns and warm sandstone.“Boronia is more botanical than floral; the leaf is more the top note than the flower itself. There are also violet notes, rose, yellow freesia, amber …”

Boronia is the fifth perfume in the Grandiflora portfolio in as many years. Downsized to 50ml ($145) and repackaged to sport Grandiflora’s signature pen and ink calligraphy, they are a new addition to distributor Nick Smart’s Agence de Parfum list.

There are now stockists in Italy, Germany, the UK and the US.Havekes is one of only a handful of Australian perfumers tapping into French expertise.The first two fragrances were interpretations of the majestic Magnolia grandiflora: Sandrine, by the late perfumer Sandrine Videault, and Michel, by Michel Roudnitska, who also collaborated on her third scent, Madagascan Jasmine.

Duchaufour, who has created perfumes for Penhaligon’s, Amouage, Comme des Garçons, Givenchy and Christian Dior, brought Queen of the Night into being and now, Boronia. Havekes has done much to reposition Australian natives as luxurious floristry rather than the “dust collectors” of old.

Her shop window is, depending on the season, alive with pale-pink feathery waratahs, watermelon-pink flowering gums, trailing amaranthus, albino Christmas bush and Eucalyptus youngiana. “It’s been a gradual acceptance – we had to introduce the natives in amongst other flowers. Now people are crazy for them.

”Creating the unexpected is still the motivation for the serene, willowy artist, whether it’s flowers suspended in blocks of ice for a lavish charity fundraiser; a 15-metre table runner of impossibly perfect Magnolia grandiflora for a private dinner, or a couture after-party that requires transforming a hangar-sized space into a magic forest.

“It’s still so exciting to create something that people have never experienced before,” says Havekes.