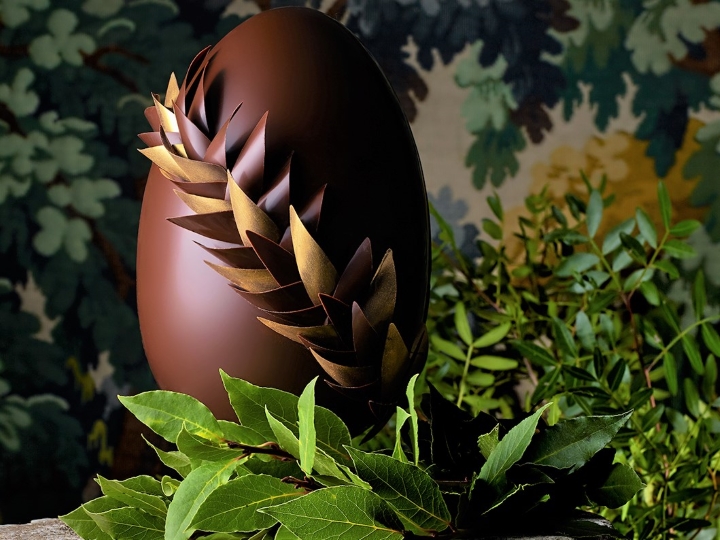 Ten Easter eggs that are almost too beautiful to eat

Some of the world’s best pastry chefs toil away every year to create the most extravagant and over-the-top Easter delicacies.

Jelly beans are fine, and dyed eggs are cute, but the Easter tradition we love more than any other is a deliciously decadent chocolate egg. And nowhere is this treat more delectable than in Paris, where some of the world’s best pastry chefs toil away every year to create the most extravagant and over-the-top Easter delicacies of the year. From the Hôtel Plaza Athénée’s gold-covered egg to Hôtel Le Bristol Paris’s chocolate nest, these eggs are almost too beautiful — and too expensive — to eat. Hôtel Le Bristol’s master pâtissier Laurent Jeannin has created this year’s most over-the-top Easter treat with nearly nine pounds of decadent goodness. Priced at a jaw-dropping $US740 (about $A975), the limited-edition dessert is a modernist sculpture inspired by the famed Bresse Farm Hen dish at the hotel’s three-Michelin-star restaurant Epicure. Four golden eggs rest in a chocolate nest that stands atop a pair of sculpted chicken legs. But it’s what is inside the eggs that is the true treasure: Each has a surprising and decadent filling, including velvety Manjari ganache infused with blackberry, rare Illanka chocolate from Peru, and ganache with lemongrass and crunchy praline. (lebristolparis.com) The renowned French pastry chef Pierre Hermé — who is also the pâtissier at Le Royal Monceau Raffles Paris — combined his passion for chocolate and art in his limited-edition Easter creation, Oeuf Tagli. The egg (priced from about $US135 or $A178 for an egg and a selection of bonbons) is inspired by 20th-century Italian artist Lucio Fontana’s Olii works. Many of Fontana’s bright canvases feature slashes or holes; Hermé’s monochromatic eggs, featured in vibrant colours like canary yellow and cobalt blue, look like they’ve been slashed on the side as well. They’re as tasty as they are aesthetically pleasing, made from single-origin chocolate from Belize with red fruit notes. Another special Pierre Hermé Easter creation, the Daphne Egg (priced at about $US37 or $A48), is adorned with a laurel garland and inspired by the Greek myth in which the nymph Daphne is turned into a tree to save her from the god Apollo. The eggs are on display at Le Royal Monceau, and available for purchase at Hermé’s shops throughout France and the UK. (pierreherme.com; leroyalmonceau.com) It took an entire year for François Perret, Ritz Paris’s head pastry chef, to develop his Du Côté de Chez Swann Egg concept. The elaborate creation is a nod to the first installment of Marcel Proust’s novel In Search of Lost Time, entitled “Du Côté de Chez Swann” (or “Swann’s Way”), which features a famous passage in which the narrator dips a madeleine in a cup of tea and takes a bite that triggers memories of his childhood. Perret’s lithe 7-inch-tall teapot is made with 70-per cent Carupano chocolate from Venezuela and topped with a chocolate-dipped madeleine crest. Biting into the secret trove of miniature madeleines with a praline-hazelnut filling is sure to inspire all kinds of wonderful memories. Priced at about $US85 (or about $A112), the egg is available by special order at the Ritz Paris. (ritzparis.com) The Shangri-La Paris’s multifaceted Megapixel and Gigapixel Easter eggs are inspired by the golden age of pixel art — digital art widely used in circa-1980s video games like Super Mario Bros. The eggs come in two sizes: The 7-inch tall Gigapixel egg (priced from about $US83 or $A109) is made with 66 per cent Caribbean dark chocolate that tastes a bit like grilled dried fruit. The smaller 5-inch Megapixel egg (about $US50 or $A66) has a malty Valrhona Jivara milk-chocolate shell coated with a white-chocolate layer in spring-tone green, yellow, or coral. Both eggs — which must be ordered 24 hours in advance through Shangri-La’s La Bauhinia restaurant — feature an almond-nougatine-and-fleur-de-sel interior that makes for the perfect combination of salty and sweet. (shangri-la.com) Le Meurice pastry chef Cédric Grolet’s Easter creation is more of a sculpture than an egg, but the whimsical daisy — or Marguerite, as it’s known in French — with white chocolate petals and a flower head of lemon zest and coconut certainly evokes the season. Grolet is known for reducing the amount of sugar in his pastries, allowing the taste of the ingredients to shine and ensuring his desserts are always well-balanced and intensely flavoured. The Marguerite will be available exclusively during Easter brunch at the hotel on April 16. (dorchestercollection.com) The Mandarin Oriental, Paris’s Egg-Planet Easter egg is a tribute to the French astronaut Thomas Pesquet, who is currently stationed on the International Space Station. Priced from about $US72 (about $A95), the Saturn-like egg is adorned with a sugar ring and made from 70 per cent Venezuelan chocolate that has been sprayed with orange food colouring for a cosmic shimmer. The inside is filled with rich dark chocolate and pecan cookie pieces that resemble miniature meteorites. (mandarinoriental.com) The Park Hyatt Paris-Vendôme’s location in the former couture house of pioneering designer Jeanne Paquin was the inspiration for the hotel’s Couter Easter Egg. Designed to look like a bobbin, the $US95 ($A125) confection is composed of 64 per cent Manjari dark chocolate and adorned with three red pincushions made of milky Gianduja chocolate, hazelnut praline, and French sea salt. (parisvendome.park.hyatt.com) The Peninsula Paris’s stunning Easter Egg trio features three delicious designs, each made entirely out of Valrhona chocolate and inspired by a city that the Peninsula brand calls home. The blush-colored Tokyo egg, decorated with sakura blossoms, is as tasty as it is pretty, made of smooth white chocolate and filled with dark-chocolate-covered caramelized almonds. The New York egg, also made of white chocolate, features spring flowers and an apple-shaped centerpiece that reveals landmarks like the Statue of Liberty and the Empire State Building. And the dark-chocolate Paris egg is a feat of edible ingenuity with doors that open to reveal symbols of the hotel including the L’Oiseau Blanc bi-plane and a miniature Dancing Leaves chandelier made out of sparkling art sugar. A single three-foot-tall model of each egg is on display in the Le Lobby restaurant; smaller versions will be sold for about $US135 (about $A178) per trio until April 17. (paris.peninsula.com) The renowned pâtissier Angelo Musa joined Hôtel Plaza Athénée as its executive head pastry chef last year. For his first Easter creation for the hotel, he has crafted a nest of chocolate twigs topped with an egg covered in shards of hazelnut and adorned with a few golden leaves. The chocolate ribbons that halo the egg are inspired by haute couture. Musa works to achieve the right balance between sweet and sharp in each of his desserts and this year’s egg is no exception. The nuanced and nutty egg, priced from about $63, can be preordered for April 16 or 17 pickup at the Plaza Athenee’s La Galerie. (dorchestercollection.com) The only Parisian egg on our list to come from outside of Paris, the Langham Chicago’s classic Versaille Egg is decidedly French with its intricate Baroque-inspired design and elegant lavender hue. Designed by the hotel’s executive pastry chef Scott Green, the egg sculpture weighs a whopping 65 pounds and is created by hand from Guittard chocolate and sugar. The Langham will also offer five other handmade eggs, including Chinook, a chocolate totem pole with a thunderbird carving that takes 50 hours to create. Though these elaborate eggs are just for display, the hotel will serve a variety of chocolate pastries during its Easter brunch. (langhamhotels.com)