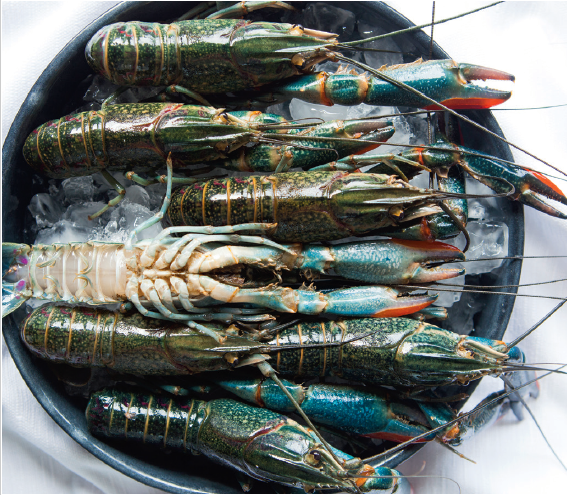 For many years a mecca for surfers, NSW’s Northern Rivers has built its food reputation on its wealth of produce

Whether it’s a surfing holiday or a permanent sea change, few destinations have the pulling power of Byron Bay and its environs in northern NSW. Waves, weather and jaw-dropping ocean views combine with laid-back living and Byron-beautiful people watching, from Tweed Heads to the Byron Shire.

This is also one of Australia’s most fertile food bowls. Any visitor to the weekly Byron (Thursday), Mullumbimby (Friday) or Bangalow (Saturday) Farmers’ Markets is sure to be truly amazed at the bounty of locally grown tropical fruit, sparkling organics and lovingly tended artisan produce. While not without a touch of fringe-feral dreadlocks, baggy pants and bare feet, it’s all part of the picture in an area that’s increasingly home to a contingent of inventive and talented farmers, cooks and restaurateurs.

“The biggest strength our region has, apart from its natural beauty and fertile conditions, are the communities stretched up and down (the coast)” says Cabarita Beach-based chef Ben Devlin. “We’re blessed with people that have a depth of knowledge, a strong sense of curiosity and a generous nature, providing fantastic produce, craft and trade work, and a creative energy that helps push everyone along.”

Halcyon House also recently lured Sydney star Danielle Alvarez – of the much awarded Fred’s in Paddington – to cook alongside Devlin for one of the hotel’s Gourmet Weekends. Originally from Miami and previously of the legendary farm-to-table Chez Panisse restaurant in California, Alvarez found herself in farm-grown produce heaven.

“They brought us some beautiful tropical fruits, even a few things I had never heard of!” Alvarez marvels. “Along with gorgeous little purple cauliflowers, calcot onions and mulberries.” Alvarez’s mulberry cheesecake that weekend was the stuff of memories.

Halcyon House’s suppliers include local markets regular John Picone, of Picone Exotics – grower of up to 400 different exotic fruits and other edible plants – and the lush green Boon Luck Farm next door, which supplies mostly Asian-inspired fruits, herbs and vegetables to a string of family restaurants in Sydney.

“It’s great to show people the big differences in growing conditions/climates that we are lucky to have,” says Devlin, “and the vast differences in fruits and vegetables we can get from one end of our region to the other.”

After Alvarez’s delightful, produce-inspired dinner the night before, breakfast began with perfect passionfruit and creamy, tangy rollinia – a tropical fruit from the custard apple family – before leaping into glorious greens, spanking-fresh local seafood and beautiful baked goods. With the surf just beyond the window, another fabulous Northern Rivers day lay ahead.