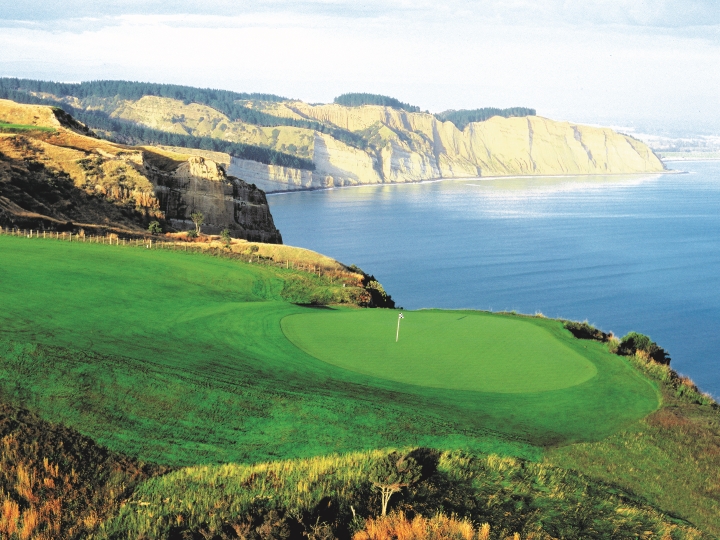 Spectacular new courses throughout the country are calling attention to this long-overlooked golf destination.

Wherever the British went, golf was sure to follow. New Zealand was no exception. Claimed by the British in 1840, the country today is second in the world in golf courses per capita. (Golf’s birthplace, Scotland, is No. 1.) Its rugged coasts and lake-strewn mountains offer an inspiring canvas for course designers, whose recent layouts – capped by Tom Doak’s breathtaking Tara Iti, which debuted in October 2015 – are finally getting New Zealand the attention it deserves as a golf destination.

With Tara Iti topping the list, Kiwis can now lay claim to three courses that are solidly in the world’s top 50 – not bad for a country of just 4.5 million people. Following are eight of our favourite spots to play on the North and South Islands. The country’s newest course is also its finest. Tom Doak’s very authentic links along the far northern coast of the North Island is spectacularly scenic and wonderfully freeform, with huge tee boxes (allowing for endlessly variable beginnings), masses of sand and windswept fescue grass, inspiring the sort of joy that comes from playing the game at its primal best. Developed as a very private club that eventually will have a few homes on-site (but well away from the course), Tara Iti is worth a special trip if you have an opportunity to stay and play there. (taraiti.com) This course put New Zealand on the golf map when it opened in 2000. Part of a 2400-hectare farm and resort owned by US hedge-fund billionaire Julian Robertson, the world-ranked Kauri Cliffs is one of those courses that leaves golfers with their mouths agape at every turn. Almost at the tip of the North Island and overlooking the Cavalli Islands, the land swoops, rises and falls with the course riding along, much of it high above the water. Designer David Harman demands a few do-or-die shots, but despite its massive majesty, the course can be managed – if you can stay focused on your shots, not the sights. A handsome lodge with a spa and excellent restaurant abuts the course. (kauricliffs.com)

Teased by breezes and blessed with unlimited views, Doak’s other New Zealand design also counts among the world’s best. Unlike Tara Iti, however, the 12-year-old Cape Kidnappers (picured at top) sits atop tall cliffs on the North Island, where the vast, wide-open playing field gives the feeling of being in the clouds. Often compared with Kauri Cliffs –Robertson owns both resorts – Cape Kidnappers is more perpendicular to the coastline, running toward and back from the cliff edges rather than along them. This layout slightly minimises the drama of the setting but creates a purer playing experience. Like Kauri Cliffs, Cape Kidnappers is accompanied by an elegant lodge. (capekidnappers.com)

The North Island’s Lake Taupo was formed by a volcanic eruption some 2000 years ago. Nearly touching the lake’s north end is the only Jack Nicklaus-designed course in New Zealand. This inland beauty is framed in long grass and plays through a valley on the front nine and higher, more rolling terrain on the back. Nicklaus throws in a little bit of everything, including some nasty forced carries and frustrating lies, but the whole is greater than the sum of its parts. Kinloch Club guests stay in elegant lodges complemented by a main building that represents a contemporary take on a Scottish castle. (thekinlochclub.com)

Another notable architect with but a single New Zealand creation is Alister MacKenzie, one of the masters of golf’s golden age of architecture and the designer of both Cypress Point and Augusta National. The century-old Titirangi – a private club located in the Auckland suburb of the same name –is the epitome of a classic: it isn’t very long (just over 6025 metres from the back tees), it’s lined with trees, and it’s remarkable less for the number of hazards than for their strategic placement. The greens, which were all redone in the early 2000s, are slick and undulating, and the four par-3s play in four different directions. It may not be as dramatic as the other courses here, but it is a wonderful example of early golf genius. (titirangigolf.co.nz)

The great MacKenzie’s influence is very much in play at Paraparaumu, which was completed in 1949 by his Australian disciple Alex Russell. Located about 50 minutes north of Wellington at the southern end of the North Island, it is a true links course – often called the finest example in the Southern Hemisphere – that plays over rumpled, nearly treeless terrain close to, but not quite on, the Pacific. As with all real links, the wind and the capricious bumps and bounces determine a golfer’s score – and temperament – at Paraparaumu. (paraparaumubeachgolfclub.co.nz)

About 20 minutes outside of Queenstown, on the shores of Lake Wakatipu and in the shadows of the perfectly named Remarkables mountains, is a public course that offers as fine a combination of spectacular scenery and great golf as can be found anywhere. Holes on this course, designed by the very talented Kiwi John Darby, climb as steeply as the nearby mountains, drop down to the lake, then repeat the ups and downs, thrilling and enchanting with the clever movement and often extreme use of the dramatic elevation changes. From the front nine, golfers can watch parachutists jump from planes and float down right next to the course. (jackspoint.com) Michael Hill, a successful local jeweller, built his dream course on a former deer farm just east of Queenstown in 2007. The quirky layout is part golf venue and part sculpture park, with numerous sizeable works dotting the terrain. The course, another design by John Darby, is a work of art itself, incorporating lakes, streams, elevation changes and the land’s natural movement to lull golfers into a false sense of security. The surface beauty covers underlying tension and drama, all of which will keep you thinking long after you have retired to the starkly modern clubhouse. (thehills.co.nz)