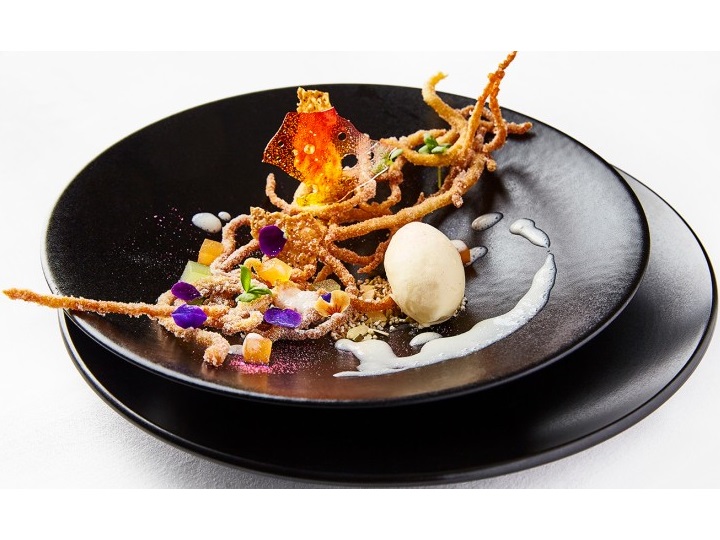 For the hottest meals in the Big Smoke, these eight celebrity-chef hotel restaurants are the reservations to make this year.

All eyes seem to be on London these days — and we're not talking about Brexit. The British capital has an ever-growing roster of hotels from swanky Mayfair to funky Shoreditch, and with them, a host of international celebrity chefs has arrived.

Jean-Georges Vongerichten, Nobu Matsuhisa, Anne-Sophie Pic, and other culinary luminaries are heading to London's best and newest hotels for the locations of their own highly anticipated openings.

For the hottest meals in the Big Smoke, these eight celebrity-chef hotel restaurants are the reservations to book this year. For her first London restaurant, Anne-Sophie Pic — the first chef in France to earn three Michelin stars, and the only woman to currently hold the designation in France — has been spending a lot of time shopping.

"I love exploring London markets because I come across so many interesting ideas to incorporate into my recipes," Pic says. La Dame de Pic is located just off the lobby of the new Four Seasons Hotel London at Ten Trinity Square, a 1922 beaux arts­ structure with high ceilings and massive columns.

The kitchen, she points out, is "very white — the same as my kitchen in Valence," where she pioneered her cooking style — and earned her triple Michelin mark. "I will use matcha or coffee — which I don't even drink — in dishes with ingredients that people think won't work together."

On her London menu, for example, she blends coffee with a curry Hollandaise sauce to serve atop white asparagus. ( fourseasons.com) "I see a lot of similarities between Shoreditch and Harlem," says the Ethiopian-born, Swedish-raised, and Harlem-based Marcus Samuelsson. "Both are creative communities and music-focused."

For the London outpost of his Harlem institution Red Rooster — which opens this May in the forthcoming Curtain hotel — Samuelsson will be serving some signature dishes (fried chicken, cornbread with honey butter) as well as a smattering of original London-inspired plates like steamed bass with brisket, broth, and pickled vegetables.

Adjacent to the restaurant will be the roadside Rooster Taqueria, serving tacos and bacon cracker jacks from breakfast onward. There will be live music five nights a week, as well as a version of Harlem's now-famous Gospel Brunch — with a local London gospel choir, of course.

"I want to become one with this neighbourhood, but also to keep the identity of Harlem," says Samuelsson. "Growing up in Sweden, London is the city you want to attach yourself to. It's a dream come true." (thecurtain.com) For her upcoming restaurant Ella Canta (Spanish for "she sings") — set to open in summer of 2017 at the InterContinental London Park Lake—chef Martha Ortiz of Mexico City's acclaimed Dulce Patria aims to create true Mexican ambience in London.

One of Ortiz's favourite dishes on the new menu is her "vampire ceviche." "What makes this dish beautiful is the deep red colour of the sangrita and the air-dried pineapple butterflies that sit atop the dish," she says. Of the seven mole sauces on the tasting menu, Ortiz highlights the black mole with duck, "which tastes like the night, smoky and profound," she says.

"The banana plum sauce has a beautiful contrast with the tortillas and flower petals." Mexican artistry will also be everywhere, from the handmade ceramics and bespoke furniture to the authentic _molino_ (or windmill) used to make _masa_ for tortillas. ( parklane.intercontinental.com)

The Game Bird, the Stafford London After working with some of London's most illustrious chefs (Gordon Ramsay and Jason Atherton among them), James Durrant has become famous in his own right. To much fanfare, he has now opened the Game Bird at the Stafford London.

The menu's namesake dish is made with an in-season game bird (grouse, partridge, or quail). He collaborates with master sommelier Gino Nardella on the wine-tasting menu, pairing his perfectly prepared birds with full-bodied reds from Italy's volcanic Basilicata region.

Durrant is also excited about his "smoked and cured trolley" — packed with home-cured and smoked eel, trout, and salmon — as well as his Salt Marsh Lamb Lobscouse. The hearty stew is traditionally made with lamb or beef and root vegetables, and "commonly eaten by sailors leaving the port of Liverpool," he explains.

"I have such great memories of being served this dish as a child that I knew I had to re-create it, elevating the ingredients slightly. I'm sure my Nan would rather I kept closer to the traditional recipe, but I feel I have managed to capture the flavours of this dish without making it too heavy to eat." (thestaffordlondon.com) At the stylish Boundary hotel in Shoreditch, each room is inspired by a different designer or movement, such as "the Shaker," "the Eames," and "the Mies Van Der Rohe."

Perhaps the hotel may soon add to that "the Paris" in honour of the chef and prolific cookbook author Stéphane Reynaud, who is heading up the property's new restaurant, Tratra. Reynaud — who grew up in the Ardèche region of south-central France in a family of butchers and pig farmers — is known for his charcuterie.

For his London restaurant, Reynaud will feature terrines, putting four on the regular menu and a fifth that will change daily. For main courses, Reynaud will serve whole joints of meat, such as a giant lamb shoulder. Everything is a loose embodiment of _Tratra_, a French word that means roughly "traditional with a modern twist." (boundary.london) Every opening from Paris's hip Experimental Cocktail Club group garners buzz — and its new restaurant in Covent Garden's charming Henrietta Hotel is no exception. To start, the chef is the highly sought-after Ollie Dabbous of London's acclaimed Dabbous restaurant.

For his new collaboration (dubbed simply Henrietta) Dabbous is, appropriately enough, turning to Paris for inspiration. "There will be a delicious croquet-monsieur and freshly baked madeleines," he says. "Classics stand the test of time for a reason: People want to eat them and there is a skill in doing them well." (henriettahotel.com) Set to open this summer, the Nobu Hotel Shoreditch will not be one to blend in. There will be Ben Adams interiors — think concrete and cantilevered steel — and, to match, an equally bold restaurant from the master of sushi Nobuyuki "Nobu" Matsuhisa.

Nobu's menu will include many of the chef's classic Japanese-Peruvian dishes, such as black cod miso and yellowtail sashimi with jalapeño, as well as new items from executive chef Greg Seregi and head sushi chef Teruya Noriyoshi.

Because a hotel restaurant must serve breakfast, Nobu delivers a creative, flavourful morning menu, too, including the Benedict Matsuhisa with crab and shiso béarnaise and the Matcha Waffle with chicken and smoked maple ponzu. (nobuhotelshoreditch.com)

Later this spring, the world-famous Jean-Georges Vongerichten will open a restaurant in the iconic luxury hotel the Connaught. He has said the restaurant will be "casual" — but only time will tell how the decidedly fancy chef will define such a loose term.

Until the Jean-Georges at the Connaught opens, the Connaught will be serving guests and Londoners alike in its Coburg Bar, Connaught Bar, and intimate Sommelier's Table. (connaught.co.uk)