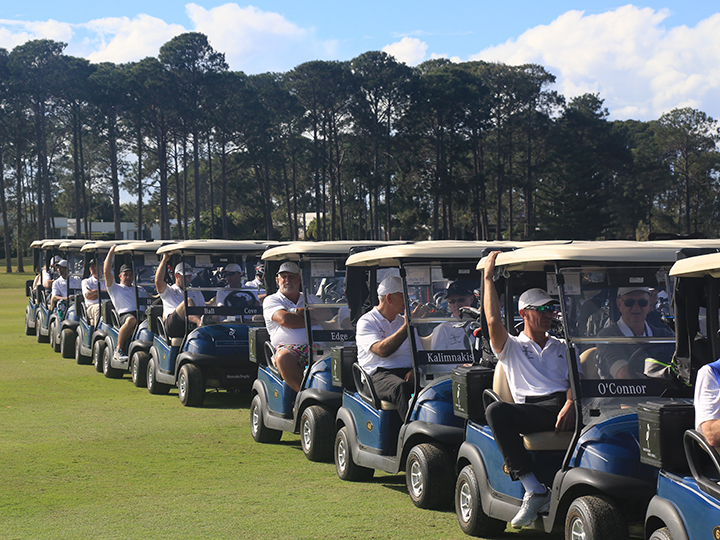 Corporate golf: turning regular hackers into stars for a weekend

The Mercedes Trophy national final offers the chance for customers to walk in the shoes of Adam Scott or Jason Day.

Mike Horn – aka “the world’s greatest living explorer” – is on stage in the MacArthur’s Ballroom of the Intercontinental Hotel in Sanctuary Cove, entertaining hundreds of golfers and Mercedes-Benz devotees.

There are tales of scaling the world’s tallest mountains, swimming the Amazon solo on a tricked-up boogie board, and circumnavigating the equator solo by boat, bicycle and canoe. The South African-born resident of Switzerland and former Special Forces soldier says most humans have 30,000 days to live. His advice: best make the most of them. The golf has been two days of stableford competition at Sanctuary Cove’s “Pines” course, the superbly-manicured, private course on Queensland’s Gold Coast. It’s perhaps as close to “tournament” golf as a weekend warrior can experience. Professional tournaments like those on the PGA Tour are like a disco most golfers can never hope to gain entry to. Yet they watch, consume and covet. The national final is a taste of golf “inside the ropes”, with an expenses-paid trip to Stuttgart to represent Australia as the prize.

“I don’t think there’s a better corporate golf day in Australia,” says Mike King of Melbourne, who claimed one of the three Stuttgart spots. “The camaraderie, the people you meet.

“And you’ve got not idea about pressure until you’ve got half a dozen holes left and you’re pretty sure you’re in the mix. My last hole I scrambled a point. And I had a decent putt to make that. If I didn’t I’m not going to Stuttgart.” Earlier, we’d sluiced up through the rainforest to Tamborine Mountain in a red Mercedes-Benz GLA hatchback: slick GPS on the dash; paddles for gear change; responsive “Sport” mode. And all with that almost sensual smell of new leather. I literally smelled the steering wheel. And wanted one. A lot.

At Songbirds Rainforest Retreat we dined with golfers’ partners, who had been entertained by celebrity chef Shane Delia’s cooking demonstration, and cruised around the Gold Coast hinterland in a fleet of sleek, black saloons, coupes and cabriolets. Good times indeed.

Post-round drinks follow at the Pines clubhouse and later we frock up for the gala dinner, where Horn meets my eye and smiles as he crushes my hand. He pumps your arm while gripping your hand like he’s squeezing a brick. It’s not aggressive; he’s not trying to dominate you. Rather, Horn shakes hands so you know you’re alive.

Within five minutes he’s inviting me aboard his ice-breaking mega-boat, the Pangaea, that he had built in Brazil and has moored in Sydney Harbour with a view of the Opera House and Harbour Bridge. And so we sit and sup fine wines and nibble on Delia’s delights. On screen, there’s a montage of the day’s golf action. There’s high fives and smiles. A man plays a shot from out a tree. (It’s a setup, but a good one.) Germany’s two-time US Masters champion and Benz spokesman, Bernhard Langer, talks of Stuttgart and the world event.

Off to one side of the stage is a huge G-Class – the type of rugged four-wheel drive that took Horn and his daughters from their home in Switzerland across Germany, Poland, Lithuania, Latvia, Russia, Kazakhstan, Uzbekistan, Tajikistan, Kyrgyzstan (“all of the ‘Stans’, I know lots of Stans,” Horn quips) and China to Pakistan. And then he attempted K2, ultimately turning back a few hundred metres short of the summit when a storm blew up that would claim the lives of another expedition that elected to continue to the top. Prizes are awarded. The “Drive to the Major” competition – for the straightest drive on the 18th hole of “The Palms’ course on Saturday – is won by Ben O’Toole from Sydney (above). His monster drive landed 24cm from a marked line in the centre of the fairway. For that feat he received an all-expenses paid VIP trip to The Open at England’s Royal Birkdale in July. Three overall winners are announced – Alan Wong from Brisbane, Rick Pegus from Sydney, and King from Melbourne. They’re draped in Aussie scarfs and deliver short, heartfelt speeches. King thanks his wife for the patience to allow him to play golf pretty much non-stop for the past month. He apologises in advance for the next three months, in which he’ll be playing even more golf in the lead-up to Stuttgart.

It’s evident from his enthusiasm that Mercedes-Benz has the fusion of brand and experience just about right. Its products are easy to love, and a golf tournament in which owners of those products become the stars for a weekend, is a great reward for their loyalty.

“The brand and this golf tournament go hand in glove,” reckons King, a former salesman who was representing his local Melbourne dealer, Mercedes-Benz Ringwood. “The finest courses, the finest cars – that’s what people aspire to do. Mercedes is an aspirational brand, these are aspirational golf courses. And a trip to Germany is an aspiration!”