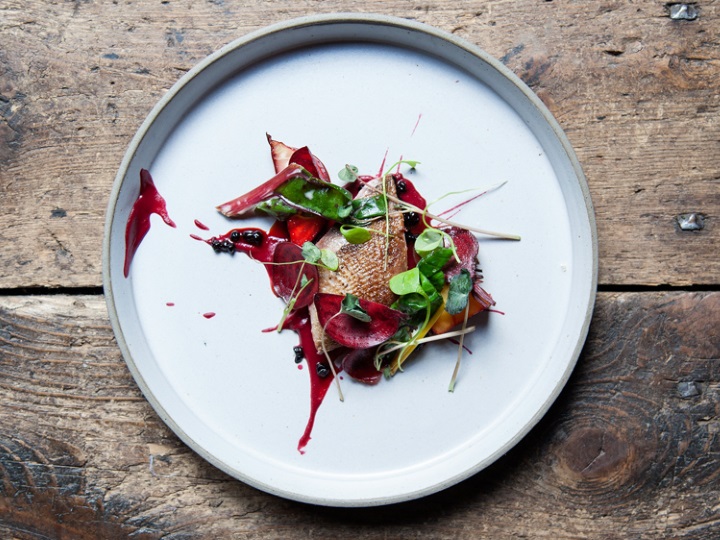 This Scottish city’s dining scene has expanded from haggis to haute cuisine.

Mealtime in Scotland used to be filled with hesitation, at least for travellers. While other European countries could boast tempting signature dishes (paella! pasta!) Scotland was best known for haggis — a pudding of sheep's innards that even Braveheart might pass up.

But times have changed, and the evolution is most evident in the capital city of Edinburgh. "We've always had an amazing larder," says pioneering chef Tom Kitchin, whose Kitchin restaurant was one of the first in town to showcase regional Scottish sourcing.

"But now our younger chefs are traveling the world and bringing fresh ideas back." The result is a new wave of ambitious, locavore restaurants popping up in every pocket of the city, from the port of Leith to the central city. It's hard to avoid a sense of place at Edinburgh's chicest Michelin-starred restaurant, Castle Terrace— the elegant silhouette of Edinburgh Castle is painted on one blue wall of the dining room. Chef Dominic Jack's menu celebrates the same local pride, although he brings classical French technique, mastered during his stints at Parisian stalwarts like Taillevent, to his Scottish ingredients. Leith, Edinburgh's port, was once the city's grittiest neighbourhood, but now Norn is just one of several restaurants that have helped turn the area into a trendy culinary epicentre. The small austere dining room, a monochromatic mix of grey carpeting and off-white walls, doesn't seem to promise much drama.

But chef-owner Scott Smith, who previously cooked at the Michelin-starred Peat Inn in Fife, leaves the excitement to his four- and seven-course tasting menus devoted to Scottish produce and producers. The kitchen's locavore purism means smoked haddock comes bathed in a sauce made from broccoli stems, crab gets paired with wild garlic and pickled leeks, and even the ice cream blends in barley and artichoke. Everything at this restaurant run by the Radford family (that's son Ben in the kitchen) comes big. Located in a mammoth converted 19th century warehouse, Timberyard features an in-house butchery and smokehouse, as well as a garden of fresh herbs growing outside the industrial chic dining room, all exposed brick and ceiling beams.

The tasting menus (4, 6, or 8 courses) show off all that industrial artistry in dishes like quail dressed with parsnip and black garlic. The bonus is an earthy drinks menu, including a Flora and Fauna cocktail infused with bee pollen, hay, and whisky, served in the outdoor courtyard whenever the Scottish sun peeks out. The scrawled ingredients, often including exotica like pink purslane, fennel tops and sea buckthorn, can read like foodie poetry, thanks to Ralston's intrepid foraging. But at the heart of his dishes are familiar Scottish mainstays, like Orkney beef, Loch Awe smoked trout, and the North Sea daily catch. The Gardener's Cottage sits just below Calton Hill, in central Edinburgh, but it evokes some twee country Brigadoon. That's partly thanks to its setting — a circa 1836 cottage flanked by rows of vegetable plantings, and lined inside with long communal tables.

Just when you think you're settling in for some old-school, rustic comfort food, though, the evening produces stylish dishes, like a stew of halibut, mussels, razor clams, fennel and wild leeks, followed perhaps by a rhubarb mousse dressed up with pears and sorrel.