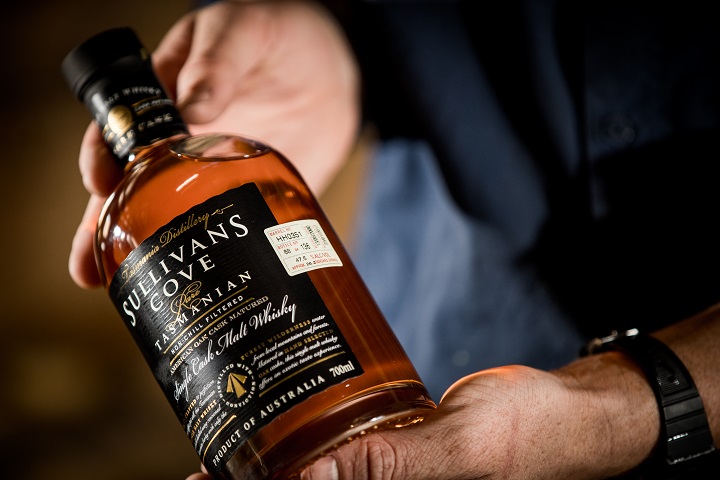 A bottle of Tasmanian single malt whisky has been snapped up at a London auction for £6600 ($11,780) in what is believed to be a new Australian record.

That equates to just over $500 a nip for the Sullivans Cove Distillery’s American Oak single malt, which was named the world’s best single cask single malt whisky at the World Whiskies Awards in March 2018.

It’s the second time that the Sullivans Cove distillery, based at Cambridge near Hobart, has picked up the award for the world’s best single malt. It first won in 2014 for its French Oak variety.

The bottle, offered as part of auction house Christie’s London Luxury Week, was numbered 88 of just 136 drawn from the winning cask, #HH0351. Aged for 17 years, it was offered in a handmade Tasmanian blackwood box along with a framed official certificate from the World Whiskies Awards.

Sullivans Cove strategy manager, Fred Siggins, says most of the other bottles from the winning cask were snapped up at the distiller’s cellar door upon release.

That was prior to the World Whiskies Awards where the American Oak was named the world’s best, and those lucky cellar door customers didn’t pay upwards of $11,000 – they paid just $290. On that basis, those lucky customers just made a tidy 4000 per cent profit. “We do have a few bottles of our own, but we’ll be holding onto those,” Siggins says.

He says the result is a record “to the best of our knowledge”, with no official records kept for what has – until now – been little more than a cottage industry.
“There might be some old bottles from the Corio (distillery) days going for a few hundred dollars a pop, but we’re not aware of anything to exceed this,” he says.
“We’re incredibly proud to consistently produce some of the best whisky in the world.”