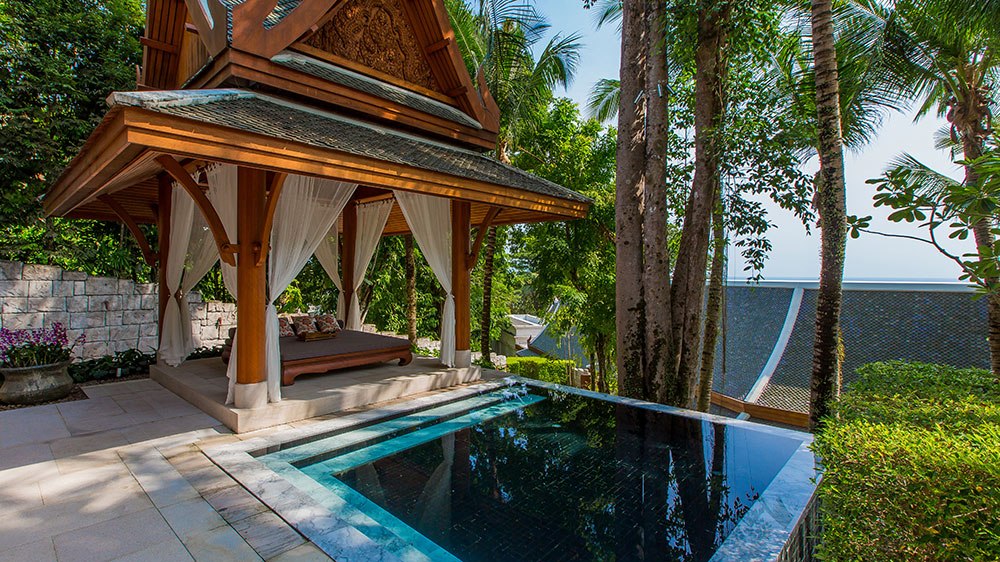 This Sprawling, Oceanfront Thai Villa Feels Like a 5-Star Resort—and Now It Can Be Yours

Well, that’s because it’s part of one.

A vacation home should make you feel like you’re on a proper vacation. This private oceanfront villa located within a five-star resort on Thailand’s island of Phuket will certainly get you to that state of mind.

Part of a protected nature preserve, Villa Sawan is a 6127-square-metre compound right on the ocean with western-facing views, gardens, indoor and outdoor living spaces and its own exclusive cove. The original owners invested tens of millions into making Villa Sawan the jewel in the crown of Trisara, a resort community on the coveted west coast of Phuket that’s home to Pru, the island’s only Michelin-starred restaurant.

“Having found a stunning location on the edge of the Andaman sea with its own sheltered cove, the owner sought to create a retreat that conveyed the tranquillity of a lost temple,” says listing agent Lyndon Phillips of Prime Real Estate in Phuket.

Mounting the steps to the main dwelling, you’ll feel like you’re about to enter sacred ground. “The name Sawan means ‘heaven’ in the Thai language, and the property is a unique vision of paradise,” says Phillips. “The designers produced a state-of-the-art, private residence by blending traditional Thai style with Khmer design borrowed from Angkor Wat and Ta Prohm,” he says of Cambodia’s famous 12th-century temple compounds. “The results are both breathtaking and versatile, with Villa Sawan working equally well as a family home, a private retreat, or a large entertaining space.”

Inside, every modern amenity has been considered. Stepping down to the lower level, you’ll find a yoga studio, gym, massage room, steam room, treatment room and cinema (seating for 11). On the ground floor, a family kitchen and dining area (seating for 14) are rounded out by a formal meeting room and an office. While upstairs, eight bedrooms and eight bathrooms offer ample space for guests to unwind and enjoy the stunning sunset views over the Andaman sea. Architectural features include wood floors, walk-in closets, and vaulted ceilings.

The temple-like entrance. Well, that’s because it’s part of one.

Venturing outside, you might take a dip in the 25-metre swimming pool, one of three pools on the compound, lounge in the dining pavilion, explore the lush, tropical gardens or stroll down to the cove at the foot of the property.

The seaside escape, with its own private driveway and security gate, also has a full-service pavilion with an industrial kitchen, staff office, storerooms, and staff accommodations.

Bedrooms open to the outdoors. Courtesy of Concierge Auctions

If you feel inclined to venture further afield, the larger resort offers a spa, tennis courts, fitness room and Muay Thai boxing ring. A short 20-minute drive will take you to Surin Beach, known as “Millionaire’s Row,” as well as celeb haunts like Catch Beach Club and Café del Mar. Best of all, Villa Sawan is just 10 minutes from Phuket International Airport, making it easily accessible from just about anywhere in the world.

It will be sold at auction with no reserve price. Bidding opens online on December 6 through Concierge Auctions in cooperation with Lyndon Phillips. The winning bid will also provide a new home for a family in need as part of Concierge Auctions’ Key for Key® giving program in partnership with Giveback Homes.

The large pool leads down to the beach. Courtesy of Concierge Auctions