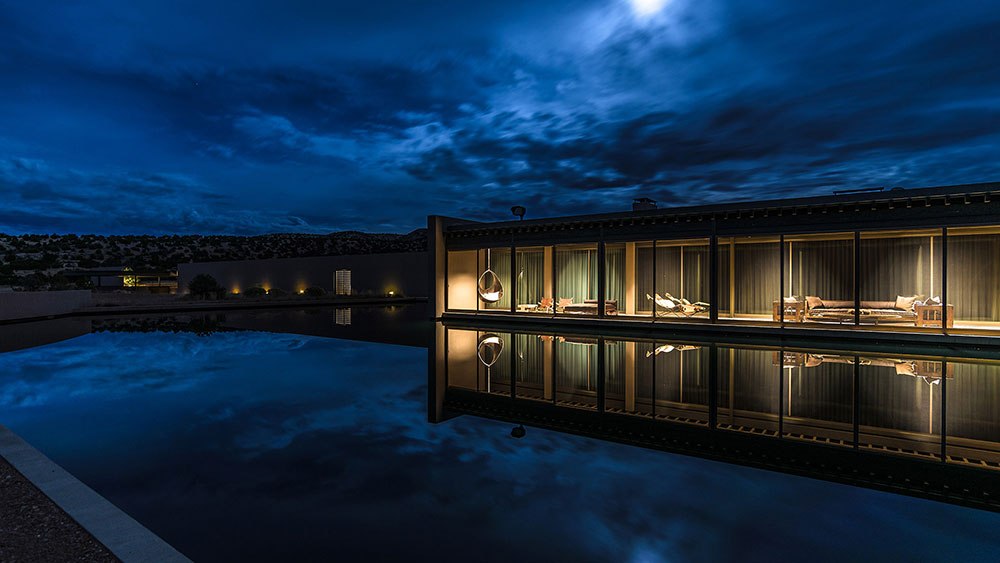 Not even the white-hot star power of celebrated fashion designer, perfumier and filmmaker Tom Ford can guarantee a home finds a buyer.

Which is why the 58-year-old fashion icon has just slashed the sticker-price of his stunning 8900-hectare New Mexico ranch from A$109 million to A$70 million—a not-so-trivial chop of $27 million.

Ford first listed his Cerro Pelon Ranch back in 2016 and, surprisingly, has had no takers.

We say “surprisingly” because the vast ranch is set in one of the most visually stunning areas of the Southwest—the Galisteo Basin, south-east of Santa Fe.

Add to that the fact that after Ford purchased the ranch back in 2001, he commissioned renowned Japanese starchitect Tadao Ando to design a spectacular, single-story modern concrete compound overlooking a serene reflecting pool.

The ranch is also home to Silverado, a complete western movie town. Originally built in 1984 as a set for the Lawrence Kasdan epic, Silverado, it has since been used as a location for such classic westerns as Lonesome Dove, All The Pretty Horses, Cowboys and Aliens and 3:10 to Yuma. In 2011, it was used in the Marvel romp Thor with Chris Hemsworth.

Originally known as Cook Ranch, the entire 8900-hectare spread was previously owned by Montana rancher Bill Cook and his wife Marian. In 2001, they sold it to Ford, who official changed its name to Cerro Pelon Ranch. “Cerro Pelon” means, rather unflatteringly, Bald Hill.

He immediately brought-in Pritzker Prize-winner Ando to create a main residence that would complement the surrounding rugged landscape. The self-taught architect is best-known for his work on the Armani Teatro in Milan, Fort Worth’s Modern Art Museum and the Ground Zero Project in lower Manhattan.

The property is an 8900 hectare compound with two guest cabins. Photo: Courtesy of Kevin Bobolsky Group

No information, or photography, of the home’s interior has been released, and the listing broker, Kevin Bobolsky, declined to disclose any further details about the property other than those in the listing.

Adjoining the home, however, is an eight-stall, ultra-modern horse barn and indoor/outdoor riding arenas, designed to satisfy Ford’s passion for riding. Along with it are literally hundreds of miles of trails.

Close by are two private, stand-alone guest houses, designed and built by internationally-recognized architects Marmot Radziner, who also oversaw the construction of the main house.

The property also includes a tennis court, four staff quarters, an office building, hidden warehouses and even a private runway and hangar.

The A$39 million price adjustment hints that Ford is keen to find a buyer for the ranch and move on. He certainly seems to be in a selling mood.

Just last month, he reportedly offloaded his Richard Neutra-designed 1950s Bel Air mansion—known as The Brown-Sidney House—for A$29 million. Records show he bought the 352-square-metre home in 1997 for just north of A$2.9 million.

Not that he’s about to become homeless. Rumour has it that he’s the mystery buyer of fashion legend Halston’s former Upper East Side, New York party house, which sold privately in January for $18 million (A$26.3 million).

Ford was also reportedly behind the 2016 purchase—for a staggering US$53 million ($A77 million)—of the sprawling Beverly Hills mansion once owned by actor William Powell (of The Thin Man series), and Bond movie producer Albert Broccoli.

And he still owns the 929-square-metre Holmby Hills estate that was once home to the late socialite and philanthropist Betsy Bloomingdale that he bought, also in 2016, for a reported US$38.75 million.

All that said, Tom Ford may miss his New Mexico ranch when it finally sells. He recently told Forbes of his growing love of a more simple life: “I am happier at my ranch in the middle of nowhere, watching a bug carry leaves across the grass, listening to silence, riding my horses and being in open space.”