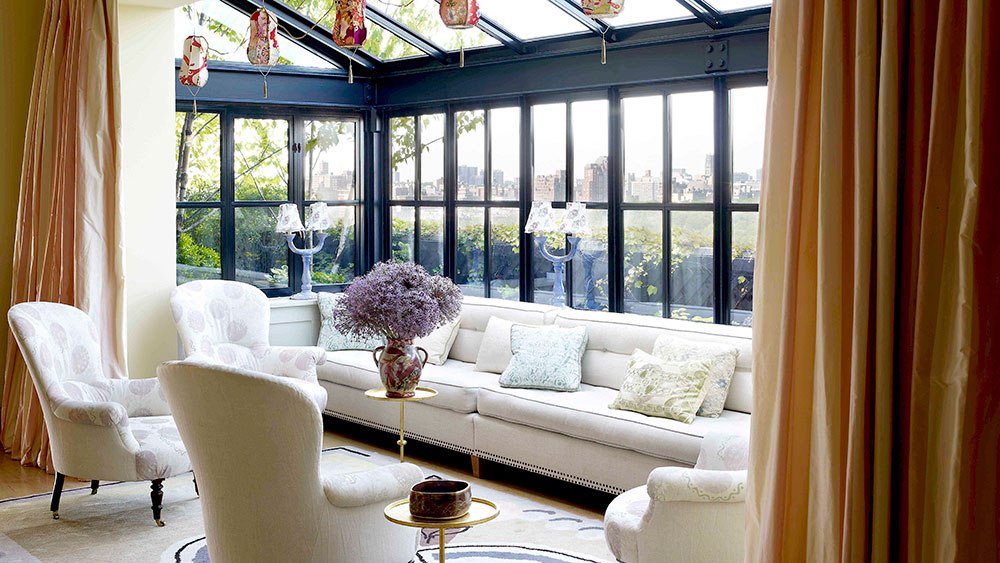 The star’s six-bedroom, 650-square-metre triplex boasts some of the best views in Manhattan.

So after 23 years, the star of everything from Broadway’s Hello Dolly, to The First Wives Club to Beaches has just listed the 14-room penthouse for $72 million.

And if you need to ask, the monthly maintenance will set you back around $37,000.

Taking up the top three floors of the classic brick-and-limestone Emery Roth-designed, 1920s building at 1125 Fifth Avenue and 94th Street, the Midler residence offers breathtaking views of Central Park, the Reservoir and that enchanting Manhattan skyline from its 278 square-metres of terraces.

Midler and von Haselberg bought the three-story penthouse in 1996 and spent two years having it remodelled by architect Frederick Fisher into an easy-going loft-like space. Ceilings were raised, corridors widened, and rooms combined and expanded.

A private elevator whisks you to the building’s 16th floor and the condo’s main living area. Doors open on to a vast 70 feet of entertaining space flooded with light.

To the left is the cozy 7.6x 7.3-metre living room with wood-burning fireplace. It opens up on to a huge 14 x 3-metre west-facing terrace with million-dollar views of Central Park.

Now stroll back across the large open gallery with its spiral staircase and light-oak floors, and there’s a large dining room and sun-drenched, newly-renovated, eat-in kitchen.

On the north side of the room, there’s a sun-filled greenhouse alcove featuring a sloping glass roof and windows on three sides giving views uptown.

Now take the staircase up to the condo’s 17th floor jungle-like roof terrace and take in its massive deck. Kick back in the library/music room with its floor-to-ceiling bookcases, fireplace and views over Central Park.

The elevator takes you back down to the 15th floor which is the main bedroom area. Here are five bedrooms, six and a half baths, along with a family room, and full laundry. One large room, currently used as a home gym, could easily be reconfigured as a sixth bedroom.

The library opens on to a deck. Photo: Courtesy of Courtesy Evan Joseph/Brown Harris Stevens

The magnificent corner master bedroom comes with a fireplace, large picture window and an adjoining dressing room/study and bathroom with a Japanese hinoki-wood soaking tub.

With Midler and von Haselberg’s daughter, the 32-year-old actress Sophie von Haselberg, now based in Los Angeles pursuing an acting career – she starred in the 2015 Woody Allen film Irrational Man, the couple says that it’s now time for another family to enjoy the home.