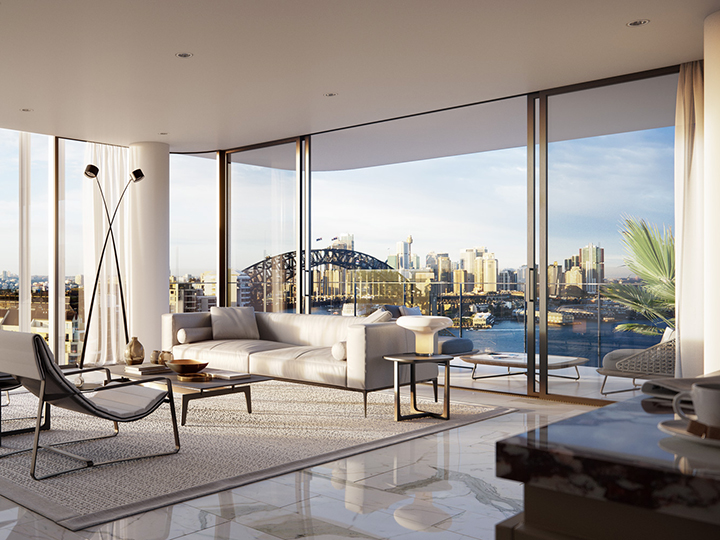 Second chance to grab one of Sydney’s most desirable views

Following the completion of Stage One – which reputedly sold apartments worth $200 million in just two hours – a second stage is now being offered.

The second stage of the Blue at Lavender Bay residential development has gone on sale offering panoramic views over Sydney Harbour and its famous bridge.

The development will be housed in a 21-storey building facing Lavender Bay, currently being used for commercial purposes. Following the completion in September of Stage One of the project – which reputedly sold apartments worth $200 million in just two hours – a second stage is now being offered including one-, two- and three-bedroom apartments. Prices range from $990,000 for one-bedroom apartments of up to 66m2 internal, to $4.195 million for three-bedroom residences of 345m2 internal.
The developer, Aqualand Australia, will begin in March 2018 the process of stripping out the building in preparation for the new fitout, which will see major restructuring of the building façade to enable apartments with floor-to-ceiling windows.

South-facing apartments with Sydney Harbour views will be fitted with a “winter garden” balcony featuring an openable window system and bi-folding doors, allowing for either an open balcony feel or a fully enclosed space. Apartments looking over the northern Sydney skyline gain a more traditional balcony set-up. Inside, PTW Interiors and Architects has created plans for apartments featuring Gaggenau appliances, natural stone kitchens, stone and parquetry floors, and extensive joinery. All apartments will include home automation features as standard, including a Home Hub with wireless controller, lighting, window and door blinds and airconditioning.

Alex Adams, Aqualand’s Head of Sales and Marketing, said: “Buyers were quick to recognise that Blue at Lavender Bay will become an iconic landmark residence, with views spanning bustling northern aspects and the most magnificent harbour in the world. “Blue at Lavender Bay will take living in Sydney to the next level and bring the very best that our city has to offer in terms of location, lifestyle and design to the market.”