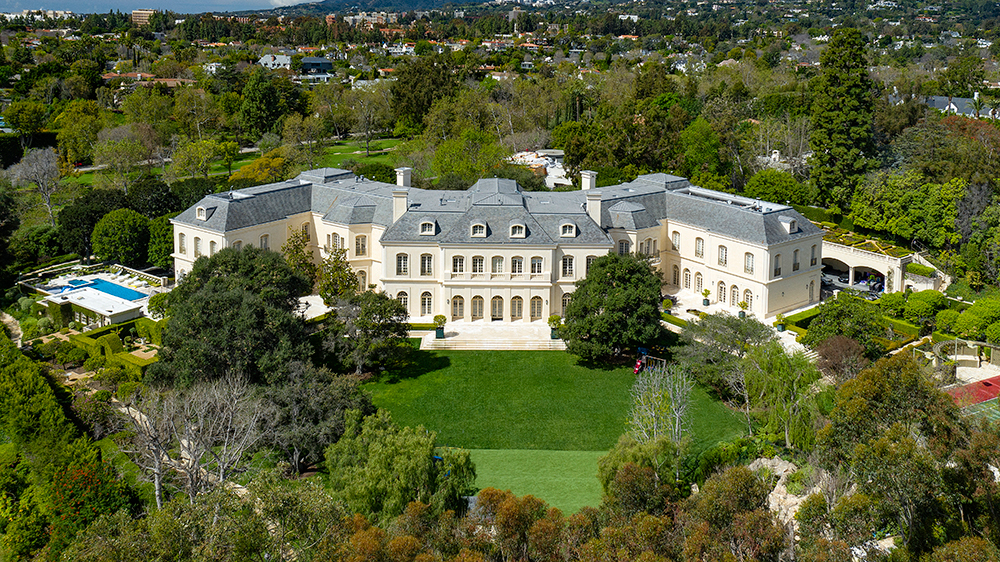 This 123-room faux French château has parking for 100 cars and its own nightclub.

British motorsport heiress and socialite Petra Ecclestone was just 22 when, back in 2011, she paid US$85 million (around for the sprawling 5200-square-metre Beverly Hills mega-mansion built by legendary Beverly Hills 90210 producer Aaron Spelling.

After listing the home for US$200 million in 2016, then dropping it to US$175 million last summer, the lavish, French château-style home known as “Spelling Manor” is now back on the market for a still jaw-dropping US$160 million (around $230 million).

Seems Ecclestone—she’s the youngest daughter of former Formula One motor racing supremo and billionaire Bernie Ecclestone—is eager to sell. The now 30-year-old has engaged the services of some of LA’s top real estate brokers to reel in a buyer.

Certainly, the home falls into the “desirable” status. The estate in the coveted Holmby Hills area of Los Angeles is one of the city’s largest and grandest. It sits on five prime acres bordering the renowned LA Country Club, just blocks from Sunset Blvd., Rodeo Drive and downtown Beverly Hills.

Spelling built the controversial home in 1990 during the height of his success producing such TV hits as Fantasy Island, The Love Boat, Dynasty and Charlie’s Angels. At the time it was one of the biggest private homes in the U.S.—140 square metres bigger than the White House—with its 123 rooms, 14 bedrooms, and 27 bathrooms. 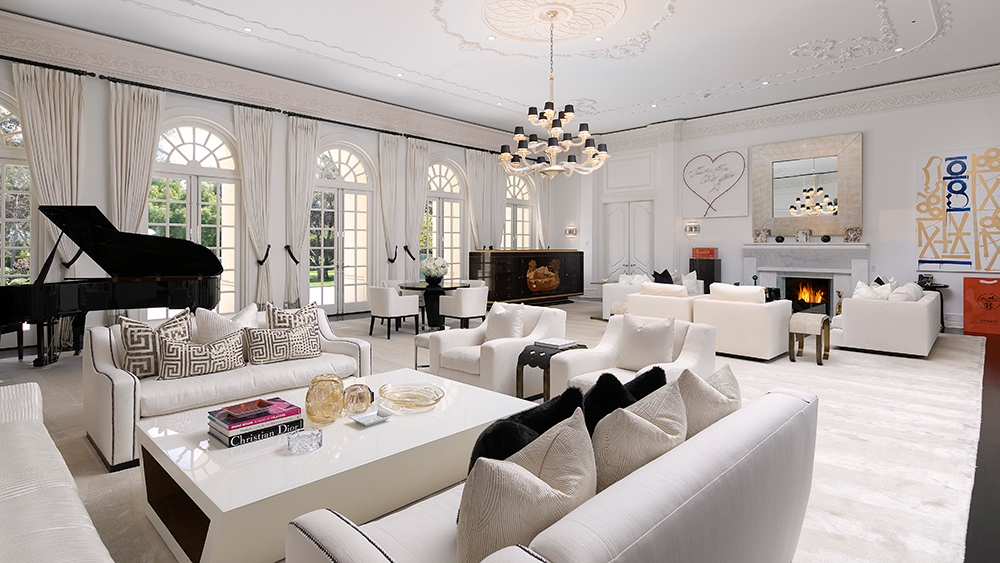 It was controversial not just for its size but for the fact that to build it Spelling bulldozed a classic 1934 mansion once owned by Bing Crosby.

Following Spelling’s death in 2006, his wife Candy listed the estate for US$150 million, though it would sit on the market for two years before she accepted Ecclestone’s US$85-million offer. After the purchase, Ecclestone reportedly spent more than US$20 million renovating the home, employing a small army of 500 workers to complete the remodel. 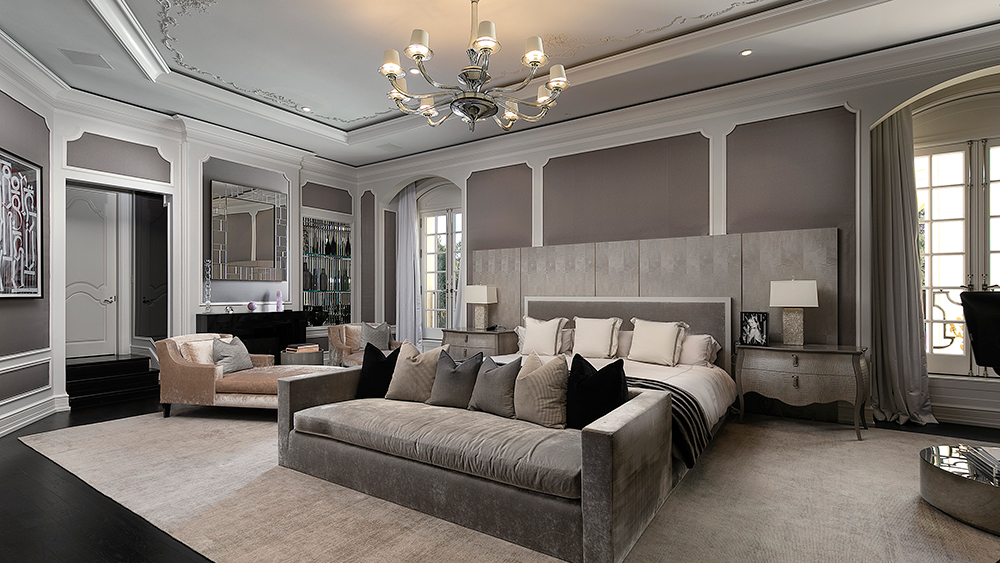 The make-over re-configured many of the Spellings’ somewhat quirky features, including the multiple gift-wrapping rooms, a flower-cutting room, a barber shop, a room dedicated to Candy Spelling’s doll collection and the twin 12×8.5-metre walk-in closets. 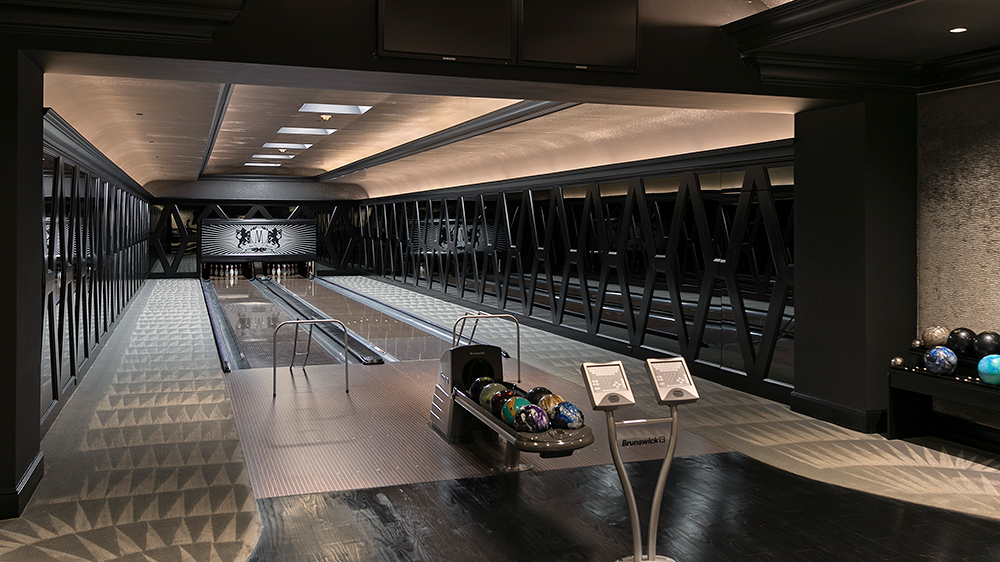 Ecclestone’s improvements included the addition of a gym, a beauty salon with massage area and tanning rooms, a wine cellar with tasting room, a two-lane bowling alley and a night club. 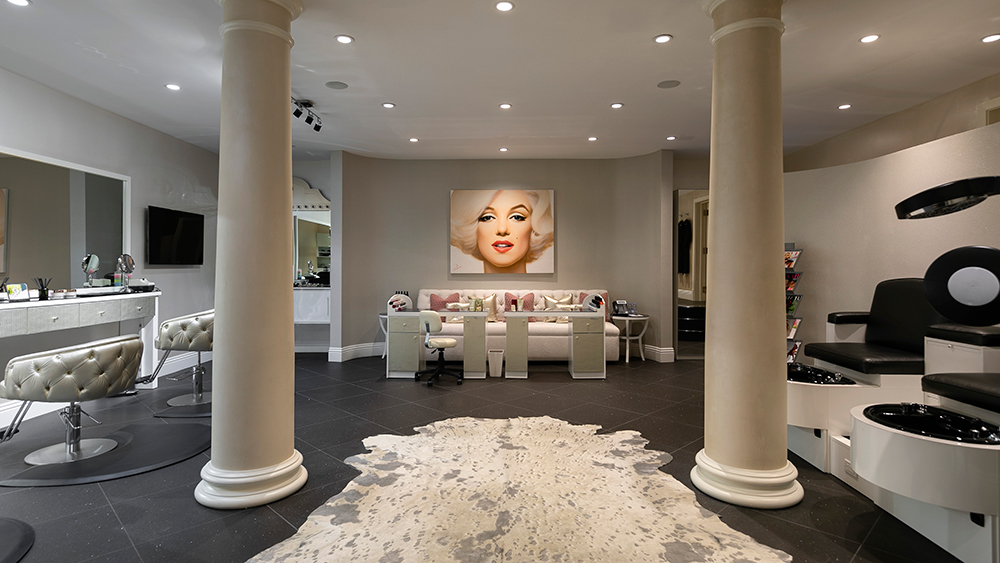 The salon
Courtesy of Coldwell Banker

Outside, the property’s secluded and expansive grounds include a circular motor court with parking space for 100 cars, a resort-calibre pool and spa, championship tennis court and stunning formal gardens. 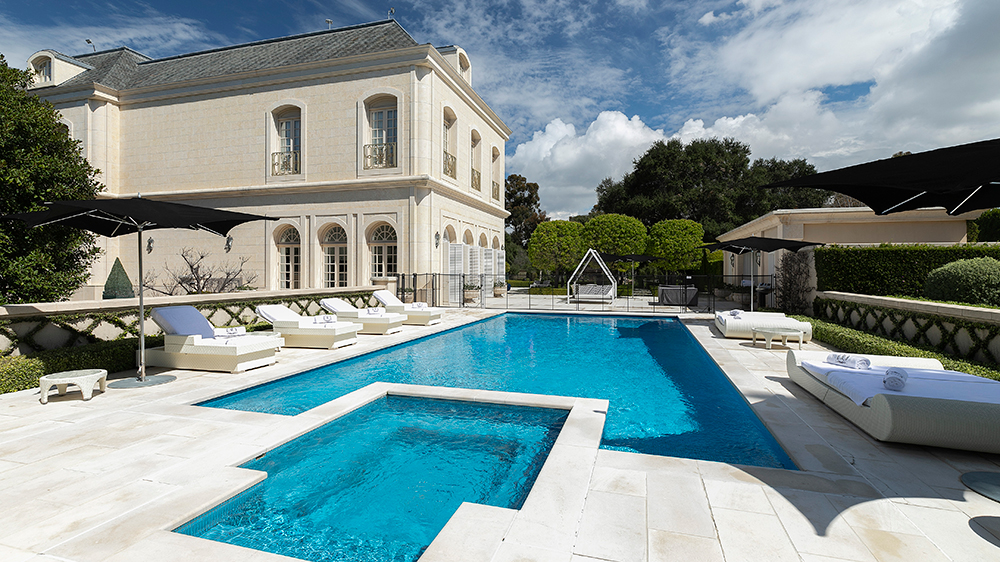 The pools and party deck.
Courtesy of Coldwell Banker

To help find a buyer, Ecclestone has called in Jade Mills of Coldwell Banker Global Luxury Property, Kurt Rappaport of Westside East Agency, as well as David Parnes and James Harris of The Agency. 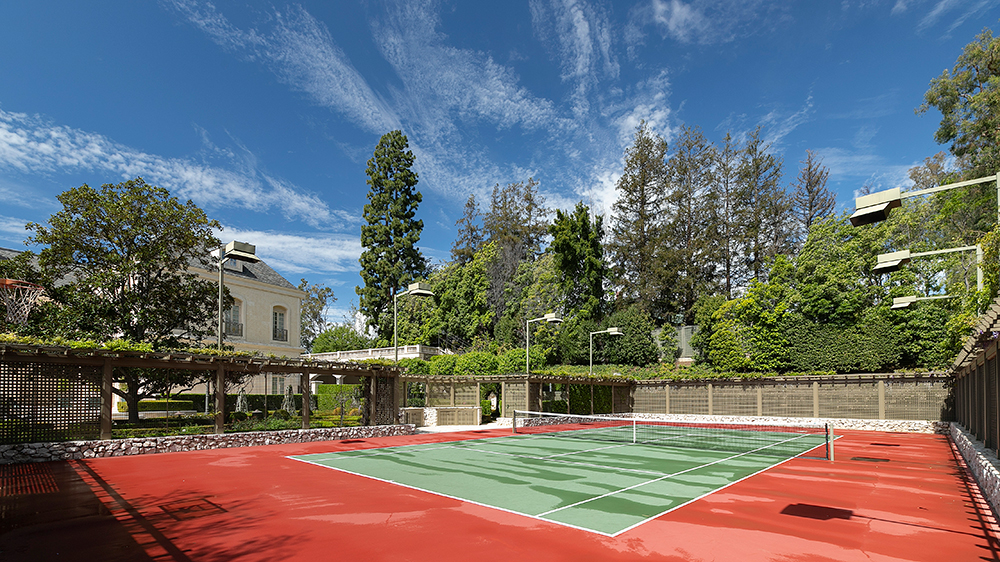 As to where the recently-divorced Ecclestone plans to settle next, she can always retreat to her second home in London. Seems a year prior to buying Spelling Manor, when she was just 21, she paid around $130 million for a historic four-story house in London’s posh Chelsea neighbourhood. 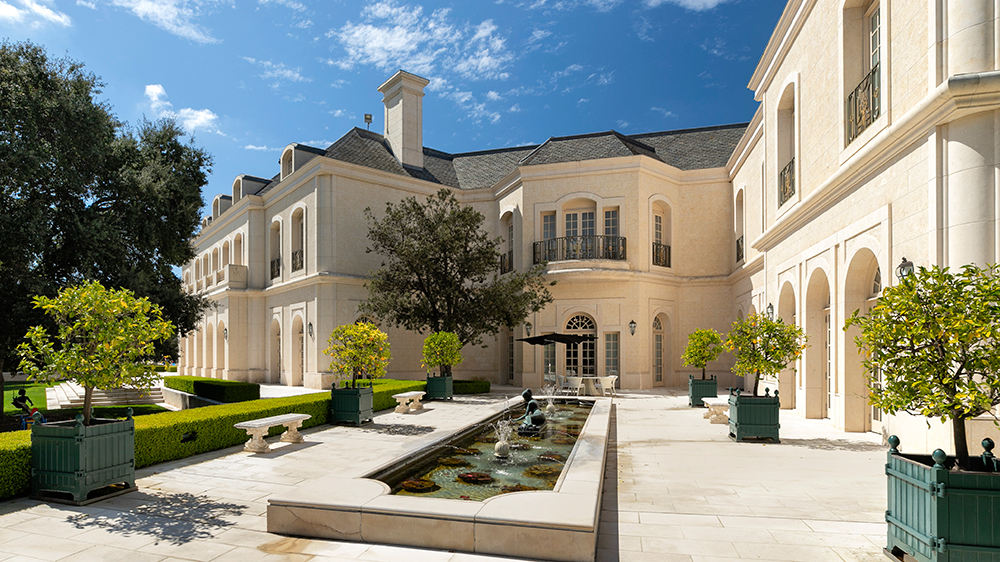 A motor court made for a motorsport heiress.
Courtesy of Coldwell Banker 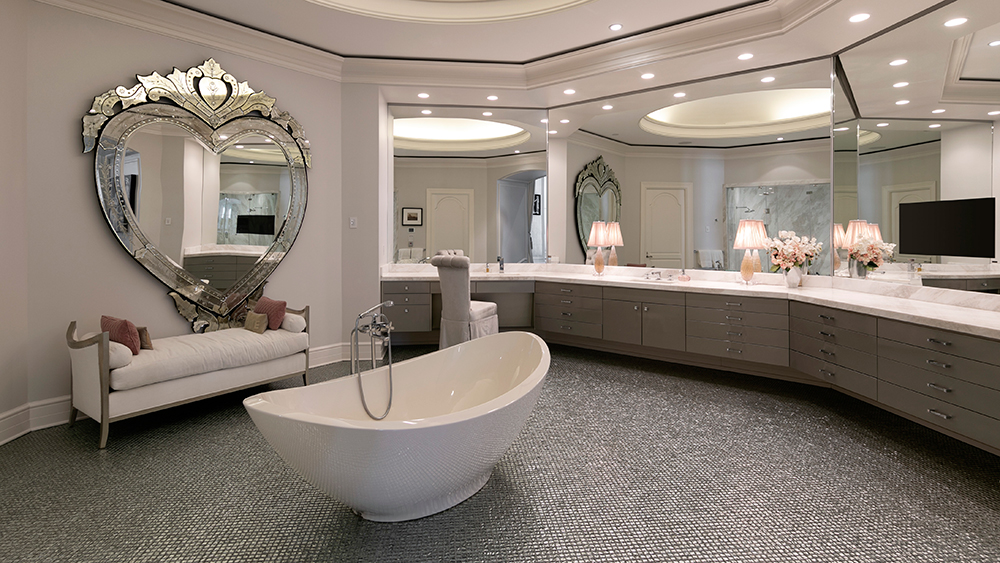 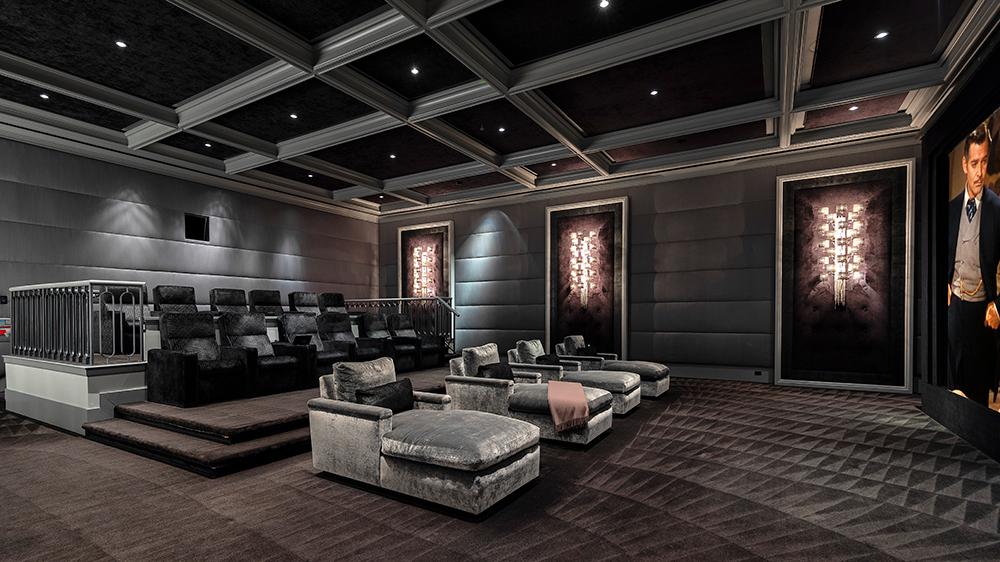