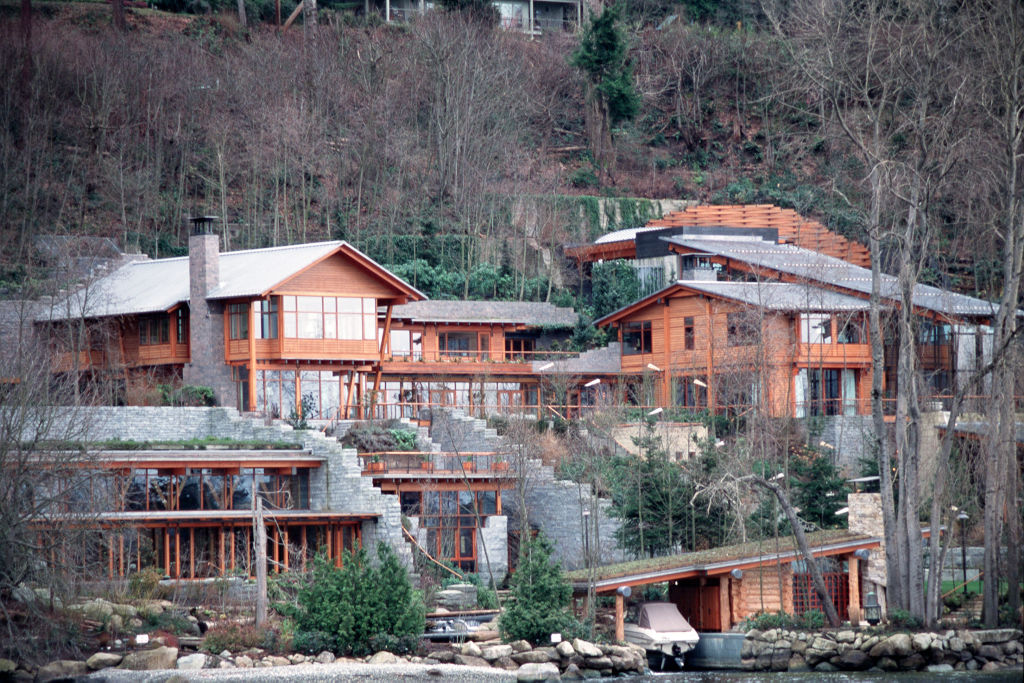 Their US-based homes alone have a combined annual tax bill of up to about $6 million.

After 27 years of marriage, amassing a planetary fortune and founding a namesake philanthropic enterprise with an endowment of nearly $63 billion, Bill and Melinda Gates announced this week that they’ve decided to split up in the most modern of ways, via Twitter. The split appears to be amicable, and the erstwhile couple says they will continue their roles as co-chairs and trustees of the Bill & Melinda Gates Foundation. They will, however, need to divvy up their Brobdingnagian pile of assets, a no doubt Byzantine enterprise that has people around the world wondering who will get what.

It’s often said that the Microsoft founder doesn’t like to spend his money frivolously. Frivolous, however, is in the eye of the beholder and often depends on the size of one’s bank account. And, for Gates, currently ranked by the bean counters at Forbes as the fourth richest person on earth with a net worth of around US$130 billion, not spending frivolously means maintaining a fleet of Porsches and other high-performance sports cars, travelling by private jet—reportedly a Bombardier BD-700 Global Express that costs upwards of US$40 million—and, though it’s worth but a tiny fraction of his overall wealth, presiding over a property portfolio easily valued in excess of a quarter-billion bucks.

It’s not clear exactly how many homes the Gates actually own, and some of their estates comprise numerous parcels and several houses. There are, though, at least eight houses and compounds spread across the United States that, according to tax records, have a combined annual tax bill that tallies up to about $4 million. That might be enough to give an ordinary millionaire a million sleepless nights, but for Gates, the yearly tax bills are nothing more than pecuniary child’s play, less, in fact, than he earns in a single day.

Based on how much wealth he added to his bottom line over the past year, according to Business Insider, he earned about $5900 per second. That means at a spending rate of $1.3 million per day it would take him about 400 years to spend his fortune. Business Insider went on to determine that he’s 66% richer than the entirety of the British monarchy, has more money than the richest person in Asia and the richest person in China, combined, and could give every person in the world $15 and still have $28 billion to spare. The Gates’ primary residence has long been a custom-built mansion that overlooks Lake Washington in Medina, Washington. The Pacific Lodge-inspired contemporary extravaganza, designed in conjunction between Bohlin Cywinski Jackson and Cutler Anderson Architects, and often referred to in the press as Xanadu 2.0, after the estate of the lead character in “Citizen Kane,” measures in at about 66,000 square feet.

Some of the notable creature comforts include seven bedrooms, two dozen bathrooms, six kitchens, including one that services a 2,200-square-foot ballroom/meeting space, garaging for a couple dozen cars and a 20-seat Art Deco-style theater. There’s also a 60-foot swimming pool with an underwater sound system, 2,500 square feet of health and wellness facilities complete with gym, sauna and steam room, a trampoline room with 20-foot ceiling, and a 2,100-square-foot library with a bookcase that swings open to reveal a hidden bar. Outside, there’s a sport court, a salmon and trout-stocked stream, a boat dock and a private lakefront beach with sand imported by barge from the Caribbean island of St. Lucia.

And, of course, the tech gadgetry is next level. Occupants and guests each wear a pin with pre-set preferences for lighting, temperature and audio-visual systems. The pins communicate with sensors throughout the house, and as one moves from room to room not only with one’s music selection of choice follow but the lights and climate systems will alter themselves automatically to correlate with preset preferences.

And, because all that just isn’t enough, in addition to the main residence, which tax records show has a value of approx. $165 million and a yearly tax bill of more than $2.9 million, the Gates own at least a dozen surrounding properties that altogether span more than ten acres with at least six additional luxury homes. The Gates dropped approx. $16 million in 1999 for a deluxe desert mansion that sits alongside the manicured greens of the exclusive Vintage Club in Indian Wells, California, a private and exceedingly-posh golf and resort enclave about 30-odd kilometres southeast of Palm Springs.

Not many details about the property are publicly available, but tax records and other digital resources indicate the 1.33-acre estate includes a main residence of nearly 14,000 square feet built in 1993 with six bedrooms and 7.5 bathrooms plus a huge swimming pool shaped like a guitar and vast sweep of manicured lawn.

The Vintage Club’s other homeowners include a bevy of billionaires, Charles Koch, Bill Gross, Dennis Washington and Ingrid Flick among them. In 2014, after it had been on the market for a few years at declining prices that started at a wildly optimistic $38.2 million and dropped to about $31.9 million, the Gates swooped into ritzy Rancho Santa Fe, Calif, a Beverly Hills-style suburb about 30 kilometres north of San Diego, and scooped up diet guru Jenny Craig’s 228-acre horse farm in an off-market deal for a discounted price of $23 million.

Then known as Rancho Paseana, and now known as Evergate Stables, the thoroughbred training and competitive hunting-jumping facility has been upgraded over the last handful of years. However, at the time of its 2014 sale, the farm includes four 30-stall barns, plus a fifth that will hold another 21 horses, an office and veterinarian suite, a guesthouse, a couple of 30-acre pastures and a 1200-metre racetrack. At the time the Gates bought Rancho Paseana in 2014, they already owned — and still own — a four-plus-acre estate at the tony Del Mar Country Club. Perched on a low ridge at the end of a palm tree-lined drive with panoramic views over Rancho Paseana, which is now called Evergate Stables, the nearly 11,000-square-foot Mediterranean villa was acquired, per tax records, in 1999 for $6.5 million. After two decades bunking periodically in Rancho Santa Fe, the Gates decided last year they’d like a place to hunker down at the ocean and, just as the Covid-19 lockdowns began to sweep across the nation, sealed the deal on the much-publicised  approx. $54.8 million purchase of an oceanfront compound along one of the most exclusive streets in the affluent seaside community of Del Mar, about six miles west of their holdings in Rancho Santa Fe.

Designed by renowned local architect Ken Ronchetti, the single-level home presides over about 120-feet of beach frontage and measures in at a comfortably large but well short of humongous 5,800 square feet with six bedrooms and 3.5 bathrooms, plus a pair of guesthouses. Marketing materials from the time of the sale indicate the unconventionally bifurcated estate —the main house sits on one side of the street and a secondary structure is on the other — offers a plethora of leisure and recreation options including a home theatre, a glass-tiled swimming pool, a 10-person hot tub, a health and fitness suite and, of course, a huge terrace with unparalleled views up and down the sugary sand. Back in 2009 it was widely reported Gates shelled out somewhere in the neighbourhood of $11.5 million for a sublimely beautiful ranch of almost 500 acres nestled into the foothills of Carter Mountain about 30km outside of Cody, Wyoming.

At the time of the transaction, marketing materials for the property indicated the fairly remote ranch is approached down an 11km drive with a 15,000-square-foot main residence known as Irma Lake Lodge. Additionally, there’s a five-bedroom guesthouse, a caretaker’s house, and a three-room cottage built by American Old West legend Buffalo Bill Cody who settled the land sometime around the turn of the 20th century. It was Cody, in fact, who gave the four small and pristine lakes that dot the ranch their names: Irma, Lilly, Arta and Natalie. It’s not clear how much the Gates paid for the multi-acre estate property that sits on a wooded ridge with magical wrap-around mountain views, but becoming a member of the club is not for mere financial mortals. Membership reportedly requires a roughly $450,000 initiation fee, the purchase of a home, which typically start at more than $7.5 million, and close to $51,000 in annual fees.

Though there’s a tradition of members not talking about each other, an unnamed member recalls in a 2009 New York Times article that one of the attractions to Yellowstone Club for the Gates is the high level of privacy and security that allows the family to take to the slopes without bodyguards. The multiacre spread in Wellington, Florida owned by the Gates. Photo Courtesy: Realtor.com

The Gates have had a foot in the South Florida real estate trenches since at least 2009 when they paid approx. $7.2 million for a waterfront estate in low-key Hobe Sound. That property was sold in 2018 — at a million-dollar loss — but some years ago, no doubt because their daughter Jennifer is an award-winning equestrian, the Gates shifted their property focus to the affluent equestrian-oriented village of Wellington, about 28km west of Palm Beach at the swampy edge of The Everglades.

The Gates didn’t just buy a small training facility, however. Between 2013 and 2019, they ponied up close to $59 million for no fewer than five properties that comprise more than 25 contiguous acres within the exclusive and guard-gated Mallet Hill enclave. Their most recent acquisition in the horsey community came in 2019 when they splashed out approx. $26 million in an off-market deal for a 7.7-acre spread with a recently built mansion.

This article was originally published on Dirt.