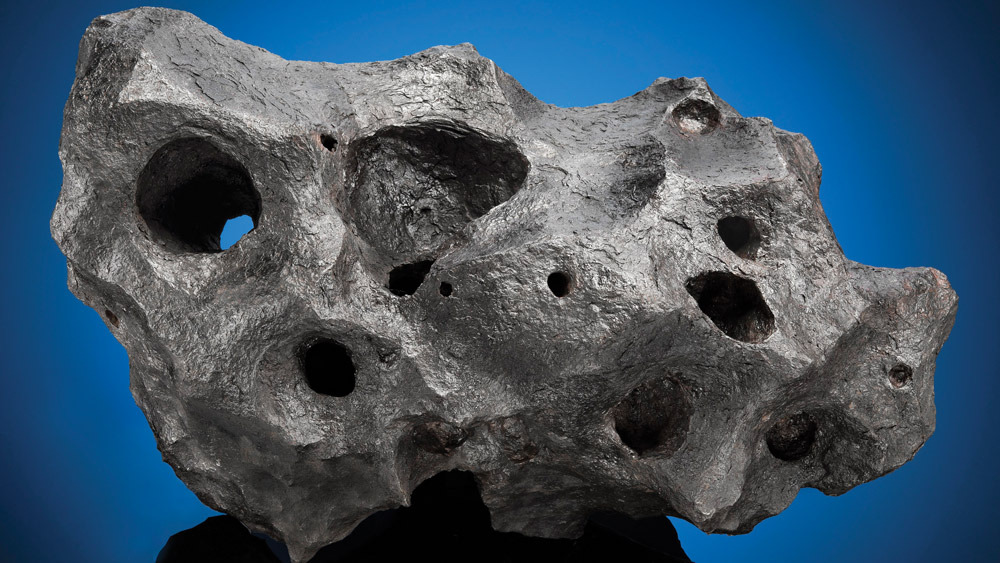 These sculptures were made in space (and their prices are astronomical)

This year, the market for meteorites has been blasting off.

On the morning of February 15, 2013, near the Siberian town of Chelyabinsk, a meteor with a mass of more than 12,000 tonnes penetrated Earth’s upper atmosphere with a force 30 times greater than the atomic bomb dropped on Hiroshima in 1945. As the large yellow fireball streaked across a chilly blue sky, it emitted tremendous heat and a blinding light far brighter than our Sun. In its wake, it set off a series of sonic booms and a shock wave that broke windows, damaged buildings and injured hundreds of people for miles around. Millions of people have viewed the stunning footage of the event captured by dashboard cameras and posted on YouTube. 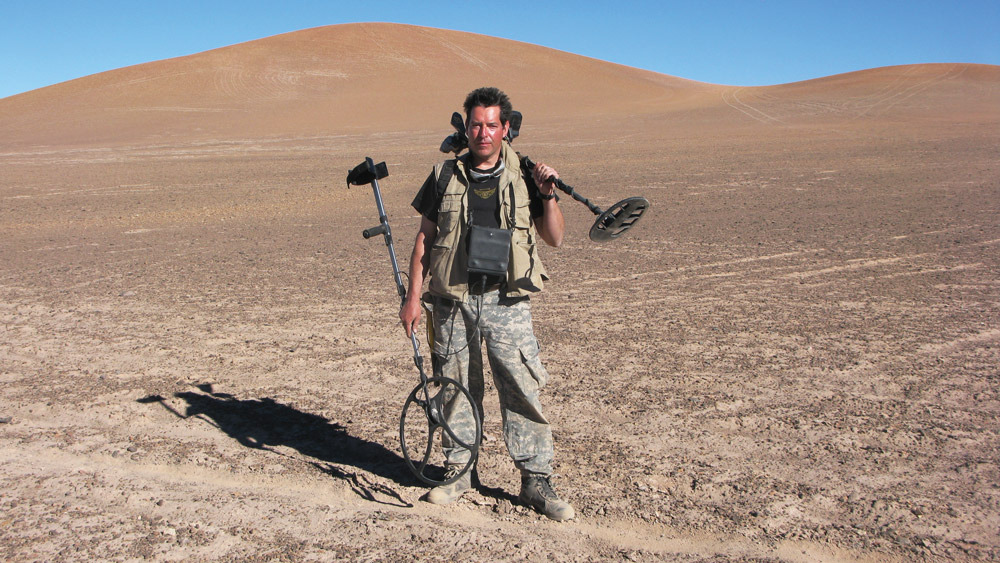 As the meteor exploded, it scattered its shattered remains over a vast swath of snowy Russian countryside, littering the landscape with meteorites, which are now available for purchase by collectors. According to Geoffrey Notkin, co-host of the popular Science Channel television show Meteorite Men, most Chelyabinsk space rocks command about US$25 per gram. In fact, Notkin says, he can sell you one from his own Aerolite Meteorites dealership if you’re interested. I know this because I bought a small nondescript specimen weighing 14 grams. Larger, more sculptural pieces command far higher prices, such as an 890-gram bullet-nosed Chelyabinsk that was recently valued at more than US$100,000.

While at present there are no hard statistics on prices and sales growth, it is clear from talking to Notkin and specialists at the auction houses that business is booming in meteorites, no pun intended. Notkin says his company’s workforce has increased sevenfold over the past decade. He estimates that the number of meteorite-selling websites has jumped tenfold during that same time period.

Darryl Pitt, the curator of New York’s Macovich Collection of Meteorites, who works with the major auction houses, says the secondary market is indeed on the move as evidenced by the prices commanded at an online sale at Christie’s this past February. For several days in the run-up to the sale, the auction house had on its website landing page, not a Da Vinci, a Klimt, a van Gogh, or even a Basquiat, but rather an animated film loop of a meteoroid piercing Earth’s atmosphere with the headline “The Art That Fell to Earth.” In addition, Christie’s displayed the space rocks on offer in the foyer of its Rockefeller Center headquarters in New York City. 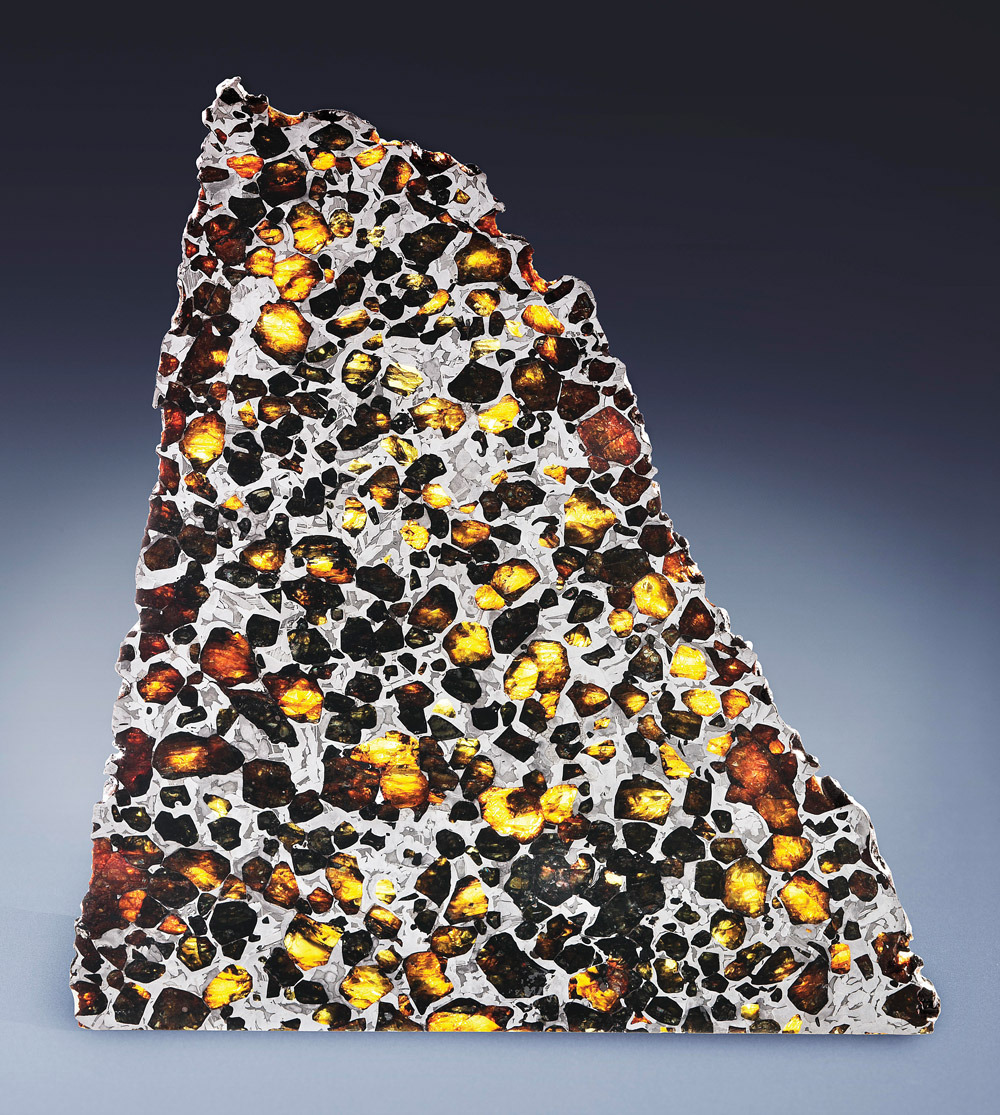 This slice of a pallasite from Chubut, Argentina, realized US$25,000 at auction.

The two-pronged meteorite marketing strategy, a first for the house, paid off handsomely, generating US$721,550 in sales. James Hyslop, head of science and natural history at Christie’s in London, was particularly pleased with the results. “In 2015, we only brought in US$286,000,” he says, adding that it is likely that the house will hold an annual auction of meteorites every February from now on.

Among the sale’s standout lots was a sculpted 32-kilogram Canyon Diablo iron meteorite from the famous Arizona Meteor Crater, which achieved an online record of US$237,500. “An uncommon smooth metallic surface delimits a somewhat ellipsoidal metallic abstract form,” reads its catalogue description. “Numerous sockets and perforations abound in a very rarely seen proximity. Wrapped in a gunmetal patina with splashes of cinnamon and platinum-hued accents, this is among the most aesthetic iron meteorites known.”

Pitt, who had owned the Canyon Diablo prior to auction, says that a decade ago the meteorite would have fetched just one-tenth of the price, and he predicts that in a few years, the sale of the piece, which likens to a Henry Moore, will be viewed as “a steal.” 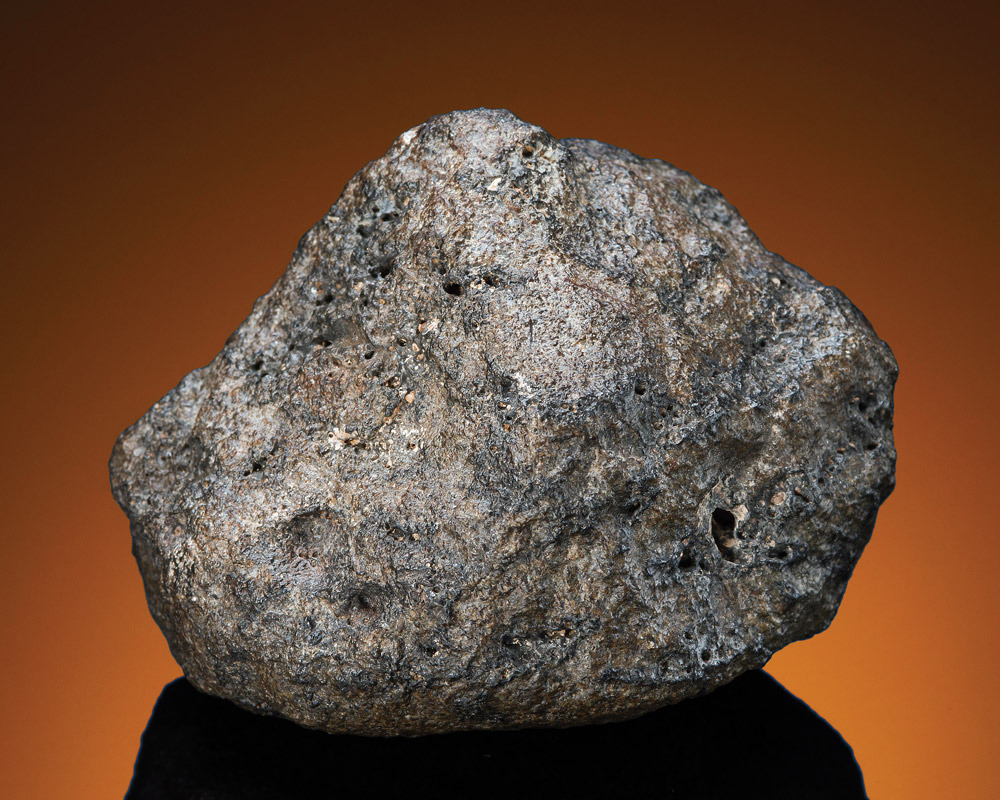 A Martian meteorite that was found in the Sahara Desert.

Meteorites of this calibre have found a cult following among celebrities known for their penchant for cosmic inspiration. Musician Sting was given an 40-kilogram shield-shaped Campo del Cielo meteorite for his birthday a few years back. Indian billionaire Naveen Jain, a space entrepreneur once ranked No. 121 on the Forbes 400 list, has a meteorite collection worth north of $5 million. Film director Steven Spielberg, SpaceX and Tesla founder Elon Musk, actor Nicolas Cage, illusionist Uri Geller and cellist Yo-Yo Ma are also rumored to be collectors.

Like many other niche collectibles with passionate devotees, meteorites garner such high prices simply because they are so rare. The world’s entire known inventory, according to Pitt, amounts to less than the annual global production of gold — about 3100 tonnes.

Most space rocks travel from the asteroid belt between Mars and Jupiter and get caught in Earth’s gravitational pull. As they pass through our planet’s atmosphere, they heat up from atmospheric pressure and start to glow. You’ve likely seen “shooting stars” at night, especially during the famous Perseid meteor shower in August. Most meteors, however, burn up well before hitting the ground. Only in rare cases do they survive their fiery entry into Earth’s atmosphere, as was the case with Chelyabinsk. 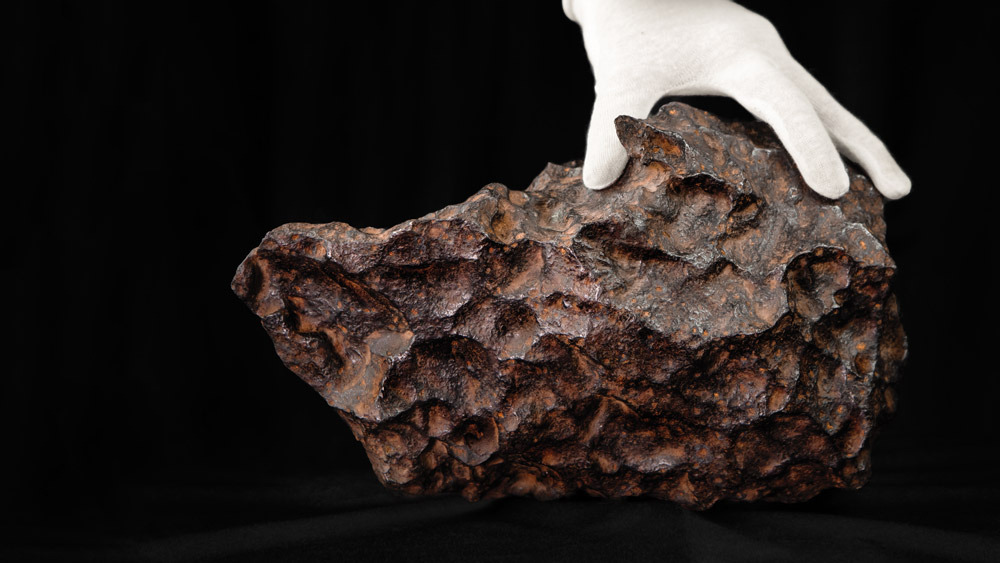 Those rare relics that have survived impact come in three basic types: Stony-irons, being the rarest, account for just 3 per cent of the finds; irons represent some 6 per cent; and stones are the most common. A meteorite is always named based on where it’s found. The billions-of-years-old meteorites from a large, 62,000-year-old impact crater near Odessa, Texas, for example, are known as Odessas, while pieces from the 50,000-year-old Arizona Meteor Crater, a scenic mile-wide void near the ghost town of Canyon Diablo, are known as Canyon Diablos. If no specific coordinates are available, a meteorite may be named after a large area instead of a specific town. Meteorites from northwest Africa tend to be known as NWAs.

The Allure of Aesthetics

When it comes to determining market prices for meteorites, Hyslop says, the factors are many and varied, and include shape, size, science, and story — what he calls “the four Ss.” The meteorites that commanded the highest prices in February brought in more because of their stunning shapes and aesthetic appeal, rather than their weights, and are a good indicator of what the market favours. “In the early 1990s, all iron meteorites — irrespective of their aesthetic appeal — were sold by weight,” says Hyslop. “But now sculptural pieces tend to be the most highly prized.”

Since lunar meteorites are not part of the Moon rock cache hauled back to Earth by the Apollo astronauts, authenticity may be called into question. However, extensive chemical and composition tests can prove that the origin, indeed, is the Moon. The rocks likely arrived on Earth following an impact from an asteroid or another meteorite on the Moon, which ejected lunar surface material into space, some of it eventually landing here. Similar tests are used to determine the authenticity of other meteorites, including those from Mars.

Another meteorite type prized by collectors is a stony-iron known as a pallasite, the interiors of which contain olivine crystals. They are among the world’s rarest and most beautiful space rocks and are often sold in slices. A 968-gram slice of one found in Chubut, Argentina, for example, found a buyer at Christie’s for US$25,000.

Stellar prices aside, Laurence Garvie, an expert who analyzes meteorites for the Center for Meteorite Studies at Arizona State University (he can tell whether your meteorite is authentic), reminds us that meteorite collecting isn’t only about money. “They’re worth what someone will pay,” he says. “There’s no intrinsic value because they’re just stones. It’s the excitement they engender.” Notkin echoes that sentiment, but says it a little differently. “While many factors determine the monetary value of meteorites, it is critical that we appreciate their great scientific and historic importance,” he says. “Meteorites help us understand how our solar system formed, they have inspired spacecraft designers, and — since most come from asteroids — meteorites are helping signpost us into a future in which asteroid mining sustains space colonies and long-duration missions.”

Pitt, Hyslop and Notkin all agree that a meteorite’s aesthetic appearance — rather than its weight — will continue to dominate the high-end market, yet collectors looking to enter the game can still find specimens from reputable dealers at more reasonable price points. Nice, albeit smaller, specimens of Canyon Diablos, Sikhote-Alins, Odessas and Campo del Cielos, they say, can all be had for under US$1,000 depending on weight and shape.

A good place to start, says Notkin, is by owning irons, which are prized for their sculpted shapes. And, because of their iron-nickel compositions, most are peppered with enticing little craters (called regma-glypts) from partial melting during their fiery trips through the atmosphere. 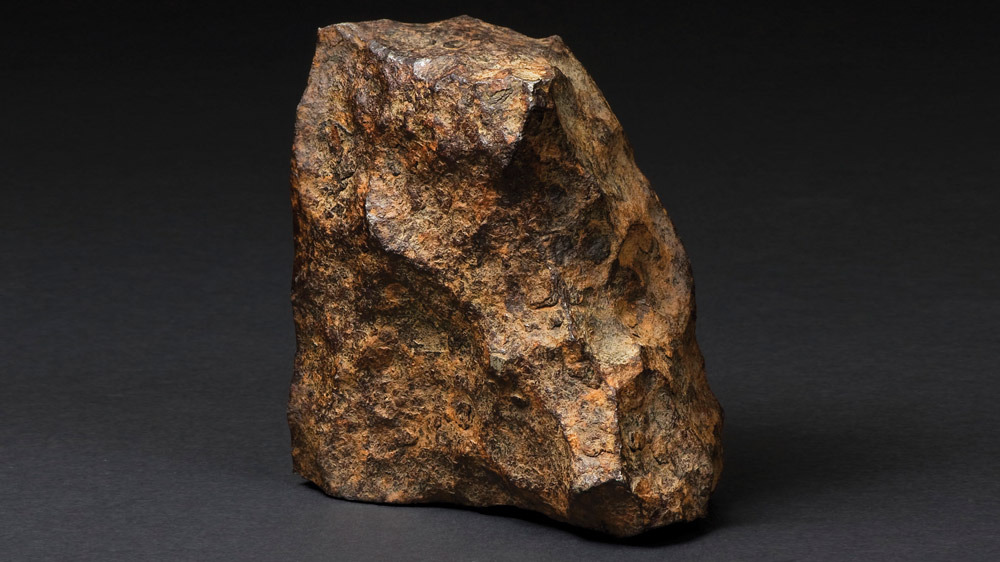 Rarity Less than 6 per cent of falls

Detectability Via metal detectors and sight

Origins The core of asteroids 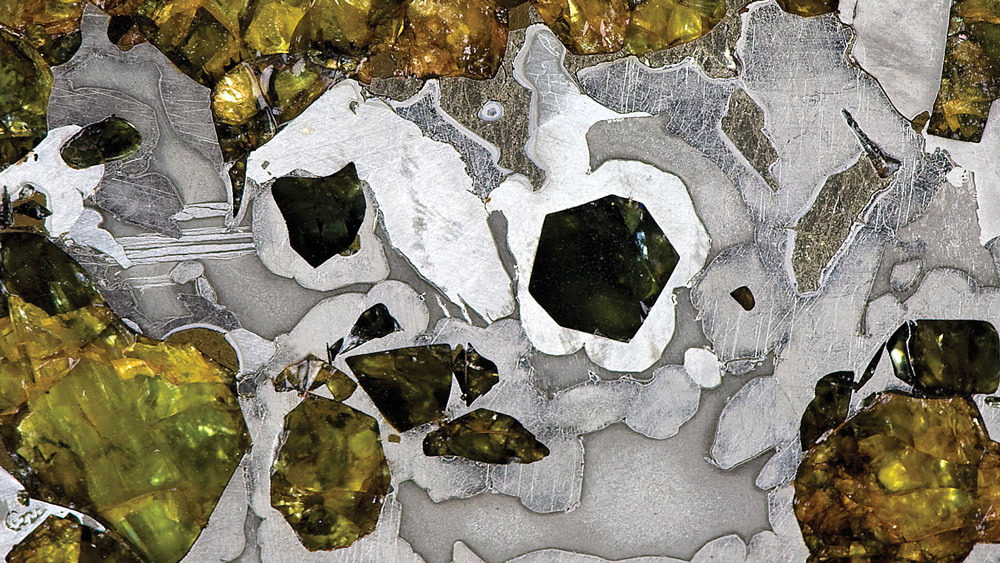 Rarity Most rare, at less than 3 per cent of falls

Detectability Via metal detectors and sight

Origins Often from the core and mantle boundary of asteroids 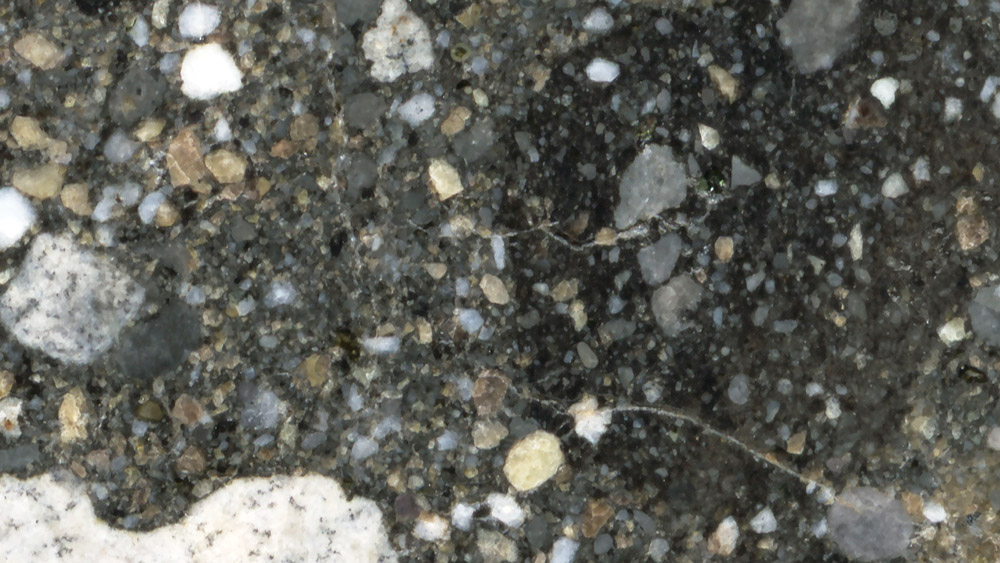 Rarity More than 90 per cent of falls

Trait May have a weak attraction to magnets

Detectability For the untutored eye, they can be hard to identify because they can resemble terrestrial rocks

Origins The surface of asteroids, moons and planets