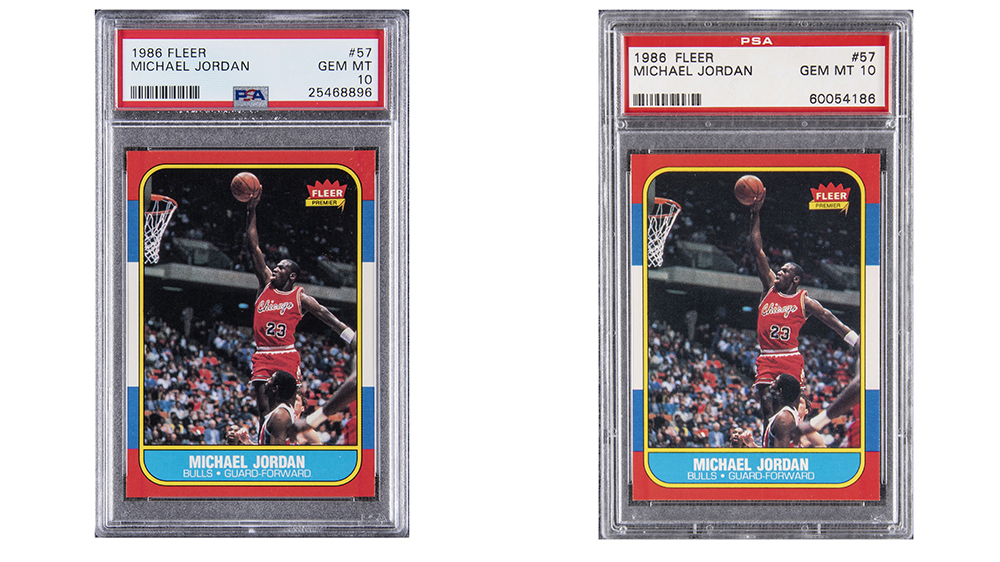 The economy may be in a precarious spot, but the collectible card market is apparently booming. The latest proof: Two Michael Jordan rookie cards set records at auction this past weekend.

On Saturday, Goldin Auctions sold two mint condition examples of His Airness’s 1986 Fleer rookie card for approx. $964,000 each. Breaking a record set less than a month prior, the astounding hammer prices mean that the value of Jordan’s first professional basketball card has multiplied by more than 15 times since the start of the Covid-19 pandemic.

The two cards, both of which are graded Gem Mint 10 by authentication company PSA, shattered the previous record for a Jordan rookie card by more than $630,000, reports Becket. The mark previously belonged to another Gem Mint 10 Fleer card that sold for US$217,000 on January 3 of this year. In December 2019, that same card was worth about US$32,000.

Prices for Jordan rookie cards have skyrocketed in the last year, something that can likely be attributed to the April premiere of The Last Dance documentary. Since March 22, the record for the most expensive the Gem Mint 10 has been broken seven times, according to Action Network’s Darren Rovell. During that time, the record has risen by $900,000, from around $64,000 to approx. $964,000. And it’s not just the value of the pristine Gem Mint 10—of which there are believed to be 316 examples in existence—that has soared. The Mint 9 version of the card has also seen its value increase fivefold, growing from US$12,500 to US$66,123.

Despite all this, Jordan’s rookie card still isn’t the most valuable basketball card. In fact, it’s not even close. That title belongs to LeBron James’s 2003-04 Upper Deck rookie card. The card, which features a patch of a jersey worn by the NBA megastar and his autograph, sold for US$1.8 million at auction last summer.

While the record-setting Jordan rookie cards were certainly the headline-grabbers at Goldin’s latest auction, they were far from the only jaw-dropping sales. A near-mint Mickey Mantle rookie card sold for $2.09 million and a Lou Gehrig rookie card in excellent condition sold for just over $1,040,000.