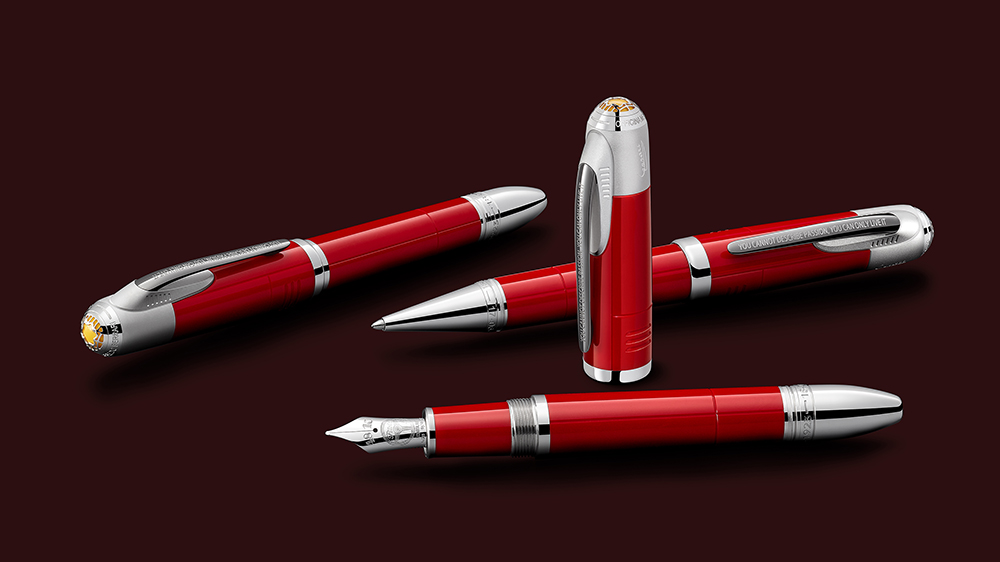 The limited and special edition pens tell the story of the legendary engineer and motor racing champion.

In tribute to Ferrari’s celebrated founder Enzo Ferrari, the German luxury goods manufacturer on Tuesday introduced three specialized writing instruments to its Great Characters series. Montblanc and Ferrari collaborated on the project to help tell the story of the racing champion and engineer who led his company to prestigious heights. Two of the releases will only be available in limited numbers, while all three are engraved with momentous dates for the marque, highlighting such significant moments as the production date of the automaker’s first car to its most important Formula One victories.

Each piece is unique, and Montblanc sets that tone with the Enzo Ferrari Special Edition instrument, which is dressed in Ferrari’s vibrant shade of “Rosso 70 Ani”. The pen’s cap and barrel draw you in with their striking form, while the cone is engraved with two dates: one marks Enzo’s birth, while the other honours his first racetrack victory in 1923. The German pen manufacturer’s emblem sits on top of the instrument in a yellow resin and is embedded in a metal grid inspired by a vintage car grill. 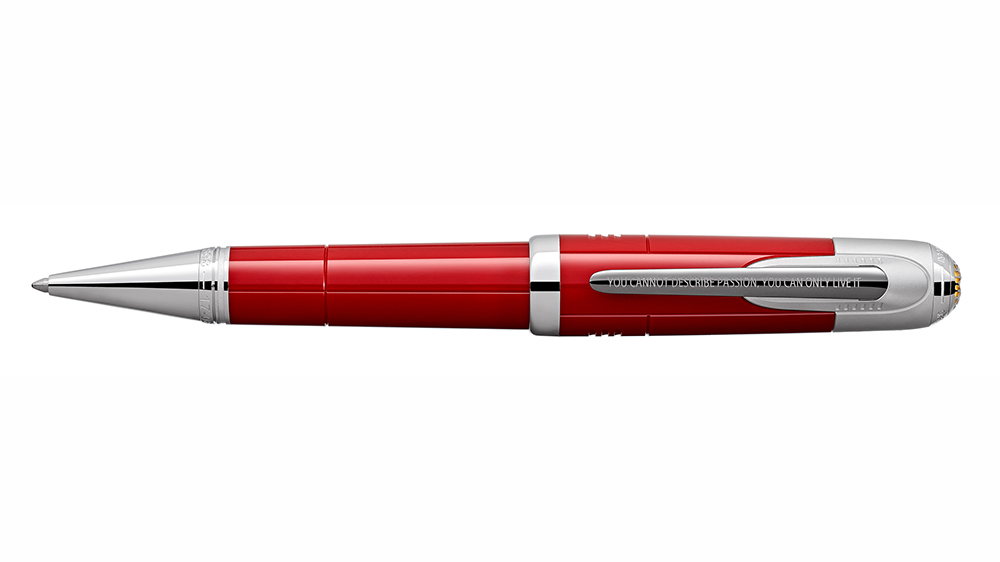 The Special Edition pen also has “Officina Meccanica Alfredo Ferrari” engraved onto the ring of its cap top, which is a reference to Enzo’s father Alfredo’s workshop, which was attached to the family home. On the instrument’s metal ruthenium-coated clip, collectors will find a direct quote from the founder stating, “You cannot describe passion, you can only live it.” And if you’re a fan of the Prancing horse logo, you’ll find it located on the back of the pen’s cap. A quote by Countess Paolina Biancoli accompanies the logo, as she was the one who gave Enzo the now-signature horse.

The pen is available in rollerball and ballpoint styles for $1590. There’s also a Fountain Pen version with an Au585 solid gold rhodium-coated nib engraved with a Ferrari 250 GTO wheel and the word “Pilota” transcribed onto it as finishing touches.

The second instrument in the collaboration honours the founder’s birth year. The GC Enzo Ferrari Limited Edition 1898 is crafted with a cap and barrel meant to resemble the surface of the original Ferrari 125 S engine. It also features two dates engraved onto its cone—one referencing the production date of legend’s first car at the famous Maranello factory, the other marking the date of the first racing victory for a Ferrari branded car. To pay tribute to the production aspect, the ring on the cap top is embossed with the address of the Ferrari factory. 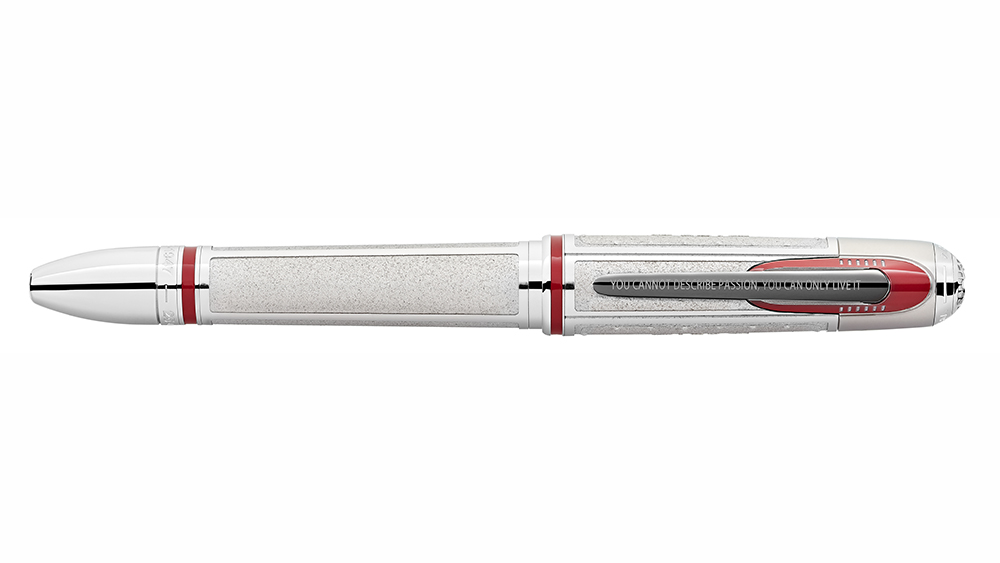 Montblanc’s emblem is presented in frosted quartz atop both the fountain and rollerball pens of this edition; this detail is meant to resemble the frozen windows on which Enzo would practice his signature as a kid. Different from the Special Edition pen, this instrument features a Au750 solid gold nib. However, it does feature the same Ferrari GTO wheel—just with the word “Commendatore” engraved on it, in reference to the founder’s nickname. This edition retails for $5095 and is limited to 1898 pieces.

The final instrument is the GC Enzo Ferrari Limited Edition 98, created in homage to the Prancing Horse emblem given to the brand 98 years ago. Limited to 98 examples, the pen’s cap and barrel are airbrushed and lacquered by hand in “Rosso Corsa”, also known as the official racing colours of Italian vehicles and drivers. The number 29 can be found on its cap in reference to the year Scuderia Ferrari was founded, alongside an engraving of the brand’s logo with an Italian phrase translating to “I am the one who dreamt to be Enzo Ferrari.” 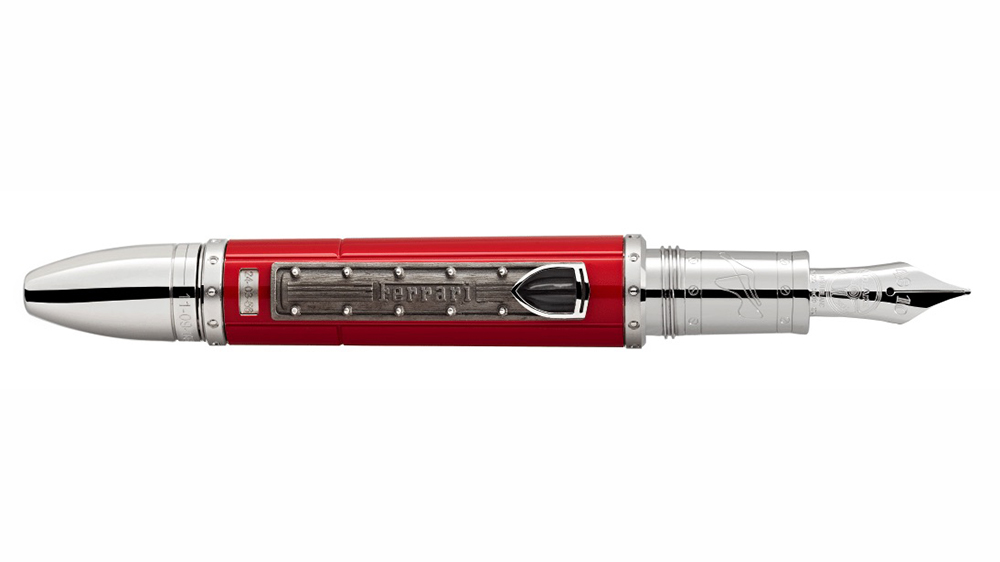 Like the other two instruments, this model features two dates on its cone: 1951 for the very first F1 victory for the manufacturer, and 1988 for its double win at the Italian Grand Prix, just one month after Enzo Ferrari’s death. Additionally, the shape of Ferrari’s racing cars is reflected in the design of the references clip, and the base is lacquered in Rosso Corsa colouring with six lines off to each side, representing a Ferrari V12 engine. Four air vents on each side of the cap are also inspired by those on the bodywork of the 1952 Ferrari 500 F2.

The Limited-Edition 98’s Au 750 solid gold nib is engraved with the word “Drake,” another nickname for founder. The piece is finished with the Fiorano test track printed on the front of the pen, Montblanc’s emblem in mountain crystal on its crown and Enzo’s signature in the centre, surrounded by work resembling a car grill.

For more information on all three editions, head over to Montblanc.com