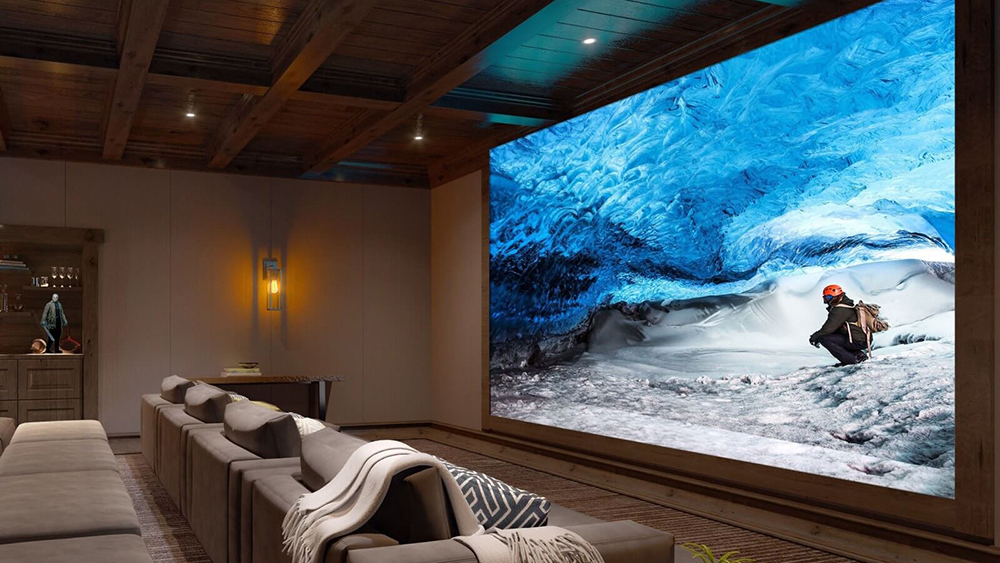 The ballpark figure is $7.3 million.

When a new gogglebox drops, it’s always the same drill: The screen gets bigger, the resolution gets better and the design gets bolder. Indeed, it’s difficult for a brand to stand out. Unless you’re Sony and the new TV your peddling is the size of a public bus and also happens to boasts an unheard-of 16K screen.

Earlier this year when Sony unveiled the colossal 19.2 metre TV—the biggest 16K screen of its kind—it had commercial cinemas in its sights. But, hey, why should theatres have all the fun? The Japanese tech titan announced the Crystal LED display system will be available for home installation.

The best part? The system utilizes modular technology which means it can accommodate virtually any desired size and resolution—from a 4.8-metre 4K to an epic 19.2-metre 16K. Of course, we opt for the latter which features four times as many horizontal pixels as a 4K television and eight times that of a high-def 1080p TV. Translation: It delivers a stunning picture to a gigantic space.

“Crystal LED delivers over a million-to-one contrast ratio, the most accurate light levels, low heat emission and a picture quality that is absolutely breathtaking. By offering the display in modular configurations, consumers now have an exciting new option for the transition from home projection systems and large-screen TVs,” said Mike Fasulo, president and chief operating officer at Sony North America.

The micro-LED technology works like OLED, but the modules—which each measure 16×18 inches in size at 360 x 360 resolution with three tiny LEDs per pixel—are much brighter, producing 1000 nit of brightness even though they are half the width of a human hair. The screen also boasts a 99 per cent black surface area to ensure high contrast and high resolution; blur-free images with high frame rates of up to 120p; and a nearly 180-degree viewing angle.

As you might expect, the setup is not cheap. Although Sony has not yet released pricing, each module reportedly costs approximately $14,000. That means the 4K unit (which has 72 modules) would sit at around $1,050,000, while the 16K screen (with 576 modules) might cost up to $7.3 million, according to Engadget. But think of the movie tickets you’ll save on having a cinema in your own home.