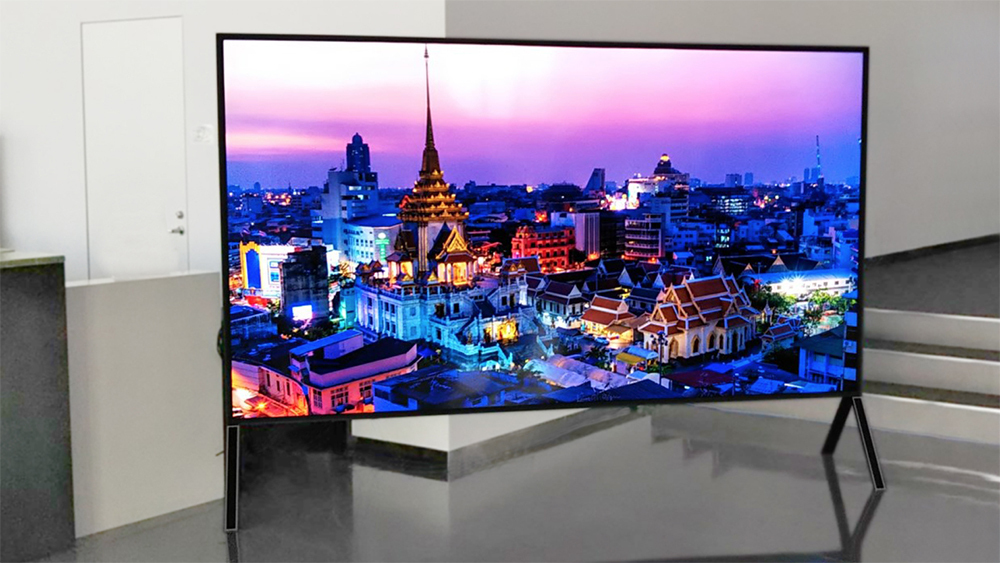 Sharp has something big in store for next week’s annual IFA trade show in Berlin. Just how big? Well, the company plans to unveil its latest 8K LCD TV at the event, a 120-inch monster it claims is the world’s largest.
The electronic company teased the big reveal in a press release earlier this week, calling the TV the “world’s largest liquid crystal display monitor.” But the massive LCD panel isn’t the only noteworthy feature TV has to offer; it will also have embedded 5G connectivity.

Of course, it’s important to pay attention to the wording of the company’s announcement—“world’s largest [LCD] monitor.” There are bigger TVs out there—specifically Samsung’s 292-inch The Wall Luxury—but those utilise MicroLED rather than LCD, as Digital Trends points out. Whereas those TVs achieve their size by combining multiple individual panels and scaling up the image, Sharp’s new TV consists of a single, backlit, LCD panel. For the time being, at least, it is the very biggest in its class.

Just as intriguing as the TV’s size is its 5G capabilities. While that feature may at first sound useless—for all intents and purposes, 5G technology won’t be available anytime soon—Sharp claims there are actual functional applications for it. While we’re still in the early days of the technology, 5G’s enormous bandwidth reportedly will make it a perfect conduit for 8K content.

According to the company, the combination of the two technologies makes the TV perfect for displaying artwork, which will be of value to both the art and education fields. The monitor will actually be able to display art with substantially greater detail than can be observed by the naked eye. In theory, the TV could allow art historians to help out on important restorations remotely.

There’s no information currently available about pricing, but expect the TV, if it’s made available to consumers, to cost a pretty penny. The closest comparison on the market is Sony’s 98-inch 8K LCD TV, which went on sale earlier this year for $99,990.