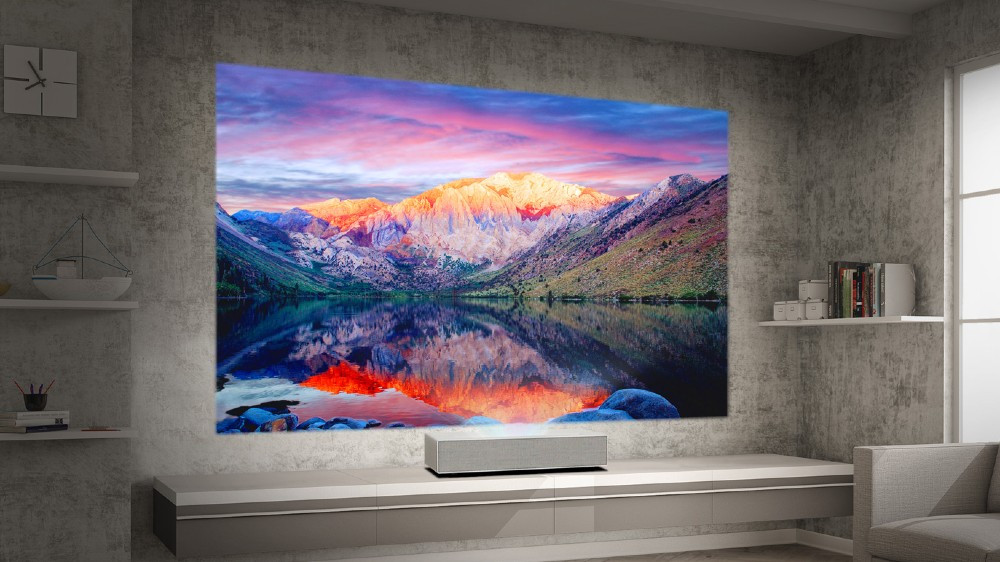 It will produce a high-resolution, 90-inch image just two 5.5cm away from a wall.

Can a home theatre projector ever look as good your wide-screen HD TV? At least one electronics company thinks so.

LG has unveiled the new, compact HU85LA 4K UHD Laser Smart Home Theater CineBeam Projector, which can produce a large 228cm image when placed just 5.5cm away from a wall, according to Digital Trends. Move it back less than 15cm, so that it’s roughly 19-20cm away, and the image expands to a giant 304cm. Of course, what good is a huge screen size if the image isn’t crystal clear? Luckily, LG appears to feel the same way.

With 8.3 million pixels (3840 x 2160), the HU85LA delivers four times the resolution of its predecessor, the HU80KA, which only offered full HD. But that’s not where the giant spec jump stops. LG’s newest laser projector produces a very bright 2700 ANSI lumens, 200 more than its older sibling, and a staggering contrast ratio of 2,000,000:1, compared to the HU80KA’s 150,000:1. It also sports HDR 10 and LG’s new 3Ch laser technology—one is red, while the other two are blue—which ensures it can reproduce up to 12-bit colour, allowing for more accurate shades. In addition, the HU85LA features two different built-in artificial intelligence engines—LG’s own ThinQ A.I. system, which includes a voice assistant, and Google Assistant. There’s also Bluetooth, Miracast screen-sharing and two built-in five-watt speakers.

But while the HU85LA has an impressive spec sheet and list of features, there are still a couple of glaring omissions. According to Digital Trends, it still doesn’t support Dolby Vision. It’s also unclear whether the projector will support Apple’s Airplay 2 and Homekit, even though other TVs in LG’s 2019 lineup do.

Despite those quibbles, the HU85LA has a lot of promise, which is good, since the company plans to sell it for $12,999. It’s not the most expensive laser projector out there—that honour belongs to the upcoming US$16,000 (roughly $23,000) Hisense 100L7T—but it’s more than double the price of the company’s previous offerings.