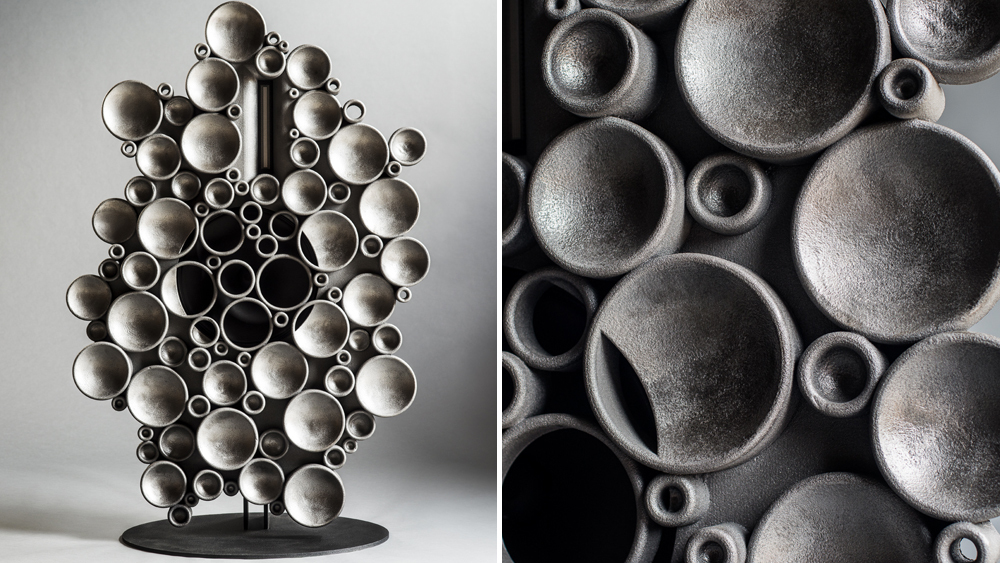 From iron and sand to true sonic nirvana.

In the late 1990s, Jonathan Weiss, an Ivy League grad with a film under his belt, fell in love with a Pennsylvania grain mill built around 1800 by a German or Swiss immigrant family named Oswald. Their 10,000-square-foot, four-story stone structure lay abandoned from 1900 until the time Weiss acquired and renovated it and made it his lab. With so much empty space and no neighbours, Weiss developed a fascination with the big, natural sound of the golden age of cinema, collecting vintage loudspeakers and tube gear by companies like RCA and Western Electric (c. 1925–45). Then he decided to create his own… only better.

Oswalds Mill Audio hand-makes not only loudspeakers—which use highly efficient drivers, with horns or open baffles—but also tube amplifiers, LP turntables and audio furniture. Digital need not apply. Weiss’s goal is glorious sound, without limits in volume, dynamic range or the ability to engage his listener. And he doesn’t discount the significance of the ritual—selecting and cueing up a record—that can affect the way one really listens to music.Each piece of gear combines Pennsylvania hardwood, cast bronze, iron, aluminium or slate from local quarries, and the products range in price from US$36,000 to US$450,000, give or take. Apart from the stone and foundry work, everything is built to artisanal standards at the company’s factory in Fleetwood, Penn.

Weiss and industrial designer David D’Imperio created the Ironic speaker—so-called because it’s made of iron and the expectations from its striking, design-statement aesthetic are upended by its amazing sound—with the drivers mounted not in a cabinet but rather on an (essentially) planar surface. Open-baffle loudspeakers have no boxy sonic colourations or resonances associated with enclosures and produce uncoloured bass, instant dynamics and music almost as if it’s hanging in free space. The Ironic looks, unlike any loudspeaker, ever made.

The Ironic begins with a sand mould into which molten iron is poured. Because of the complicated nature of the design, the mould can be fashioned only through 3-D-printing technology. Sand casting requires that the mold be broken to release the casting within, so a new mold must be produced for each loudspeaker, which when finished is 132cm high and 89 centimetres wide.

OMA worked with master craftsmen at a foundry in Virginia to execute the complex sculptural form of the Ironic, which is cast from a very special material called hypo-eutectic grey iron. It’s a metal that has a high graphite content and is used when vibration must be minimized, as in the machines that produce silicon chips.

More than 815  degrees celsius in its molten state, the iron eventually cools, and the Ironic emerges from its shelter. One can begin to discern the front, composed of an array of shallow cups. The design has the acoustic properties of more conventional quadratic sound diffusers used in recording studios to maximize diffraction and diffusion of the sound’s wavefront.

Roped and tied, the baffle (or panel onto which speaker drivers that make the sound are mounted) is not quite complete. Extraneous pieces of flashing resulting from the casting process will be trimmed and the entire surface made smooth. Visible in the centre are the holes through which the loudspeaker’s special transducers emit their sound.

The OMA Ironic was born in part because of a rare cache of 15-inch woofers used in certain jukeboxes from the 1930s. Weiss has collected and restored 20 examples, and so only 10 pairs of the Ironic can be made. The speaker is remarkably efficient, requiring a mere watt of power to produce at least 104 dB of output across the majority of its frequency range.

The Man with the Horns

CEO Jonathan Weiss stands aside a woofer used in OMA’s premier Imperia loudspeaker. The four-way Imperia is a horn-loaded system featuring wooden conical horns—made from local hardwoods—that have straight walls, which, unlike curved walls, do not deform sound waves. The ease with which these horns reproduce live concert levels, as well as the most subtle sonic details at low volume, is uncanny.