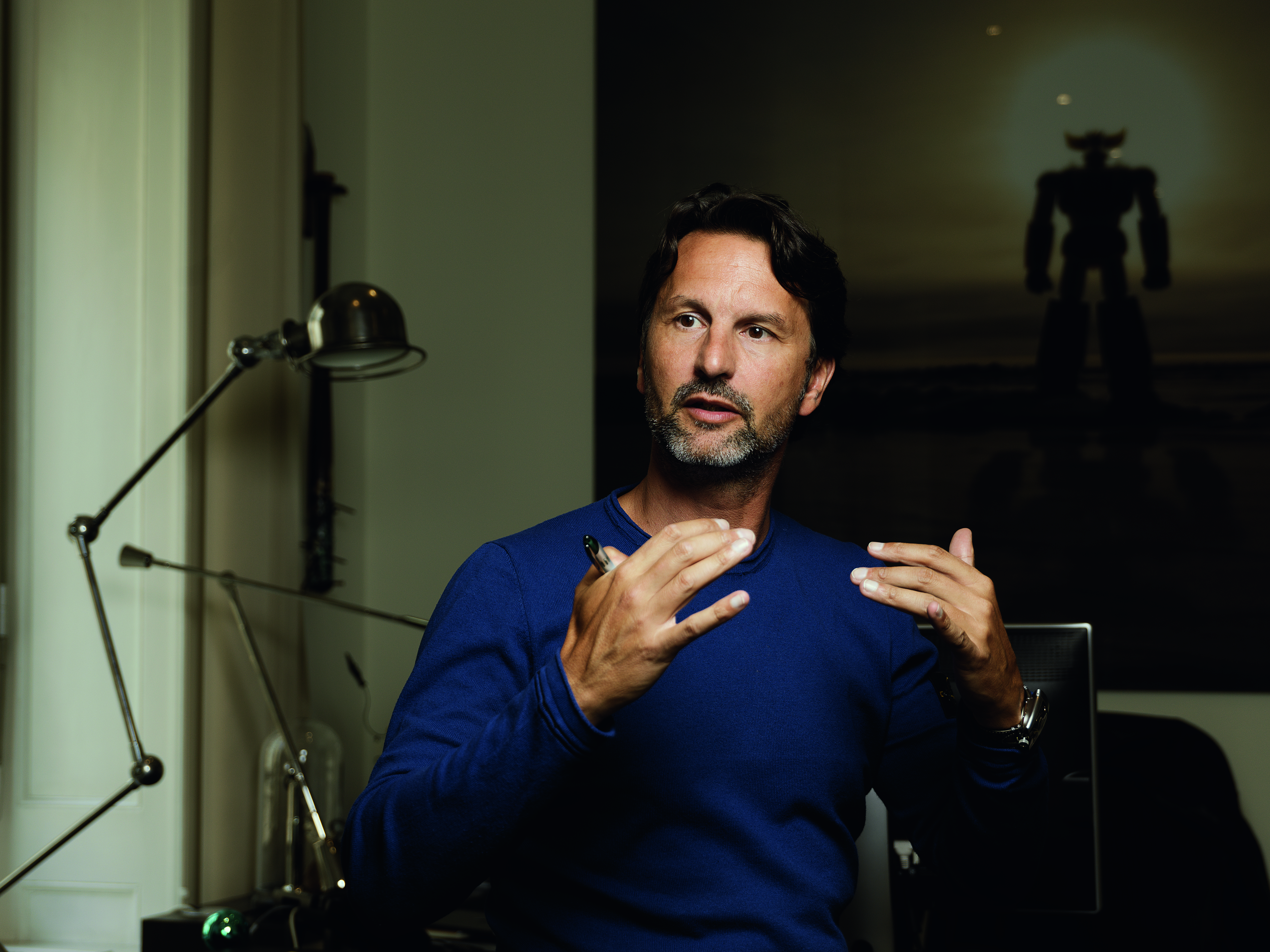 Take it to the max

Whether it’s through his aptly named M.A.D. Galleries in Geneva, Dubai and Taipei, or his haute-horological collective MB&F, watchmaking impresario Maximilian Büsser is in the business of mechanical art. Büsser grew up dreaming of a career as an automotive designer and there’s a strong vehicular theme in the galleries he curates, and the technically astounding timepieces he masterminds.

MB&F’s watches – and their limitededition collaborative music boxes, clocks and writing instruments – have taken creative cues from a vast array of sci-fi spacecraft, aeroplanes new and old, the fantastical world of Steampunk, various robots and, with the jellyfish-esque Horological Machine No. 7, undersea exploration. 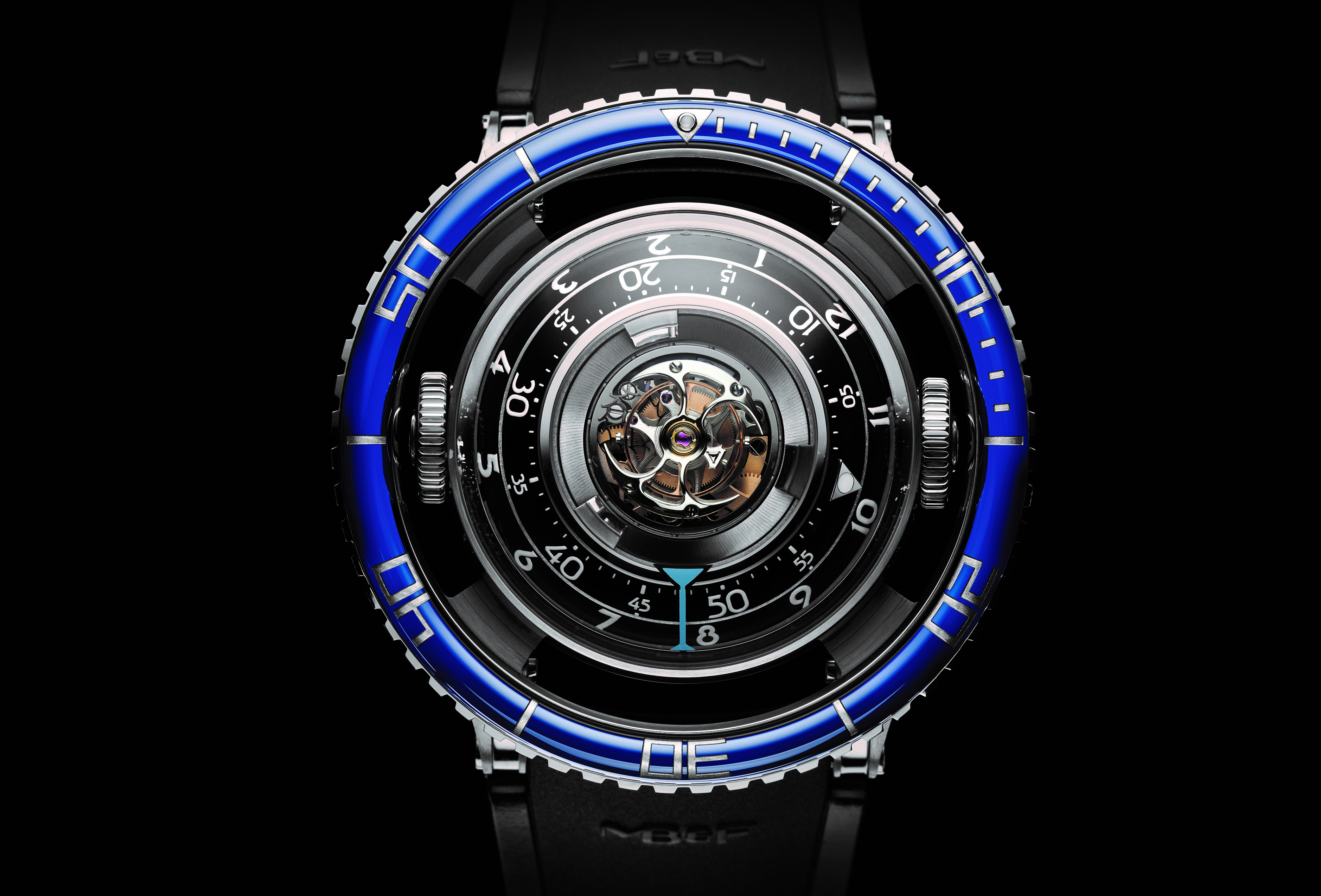 But cars remain his most abiding interest and source of inspiration. Particularly, from the mid 20th century. “I have a 1965 (Chevrolet Corvette) Stingray,” he says, with the glee of someone who now owns one of the toys he lusted after as a boy. “For me, not only that car, but that era, represents a time where car creators were artists. When you look at the shape of that Stingray, you think, wow – where the
hell did that come from?”

Mid-century motoring is a rich well MB&F constantly dips into, such as the Horological Machine No. 8 – a Can-Am homage – or the HMX, with its Superleggera lines, or the HM5, with Lamborghini Miura louvres. 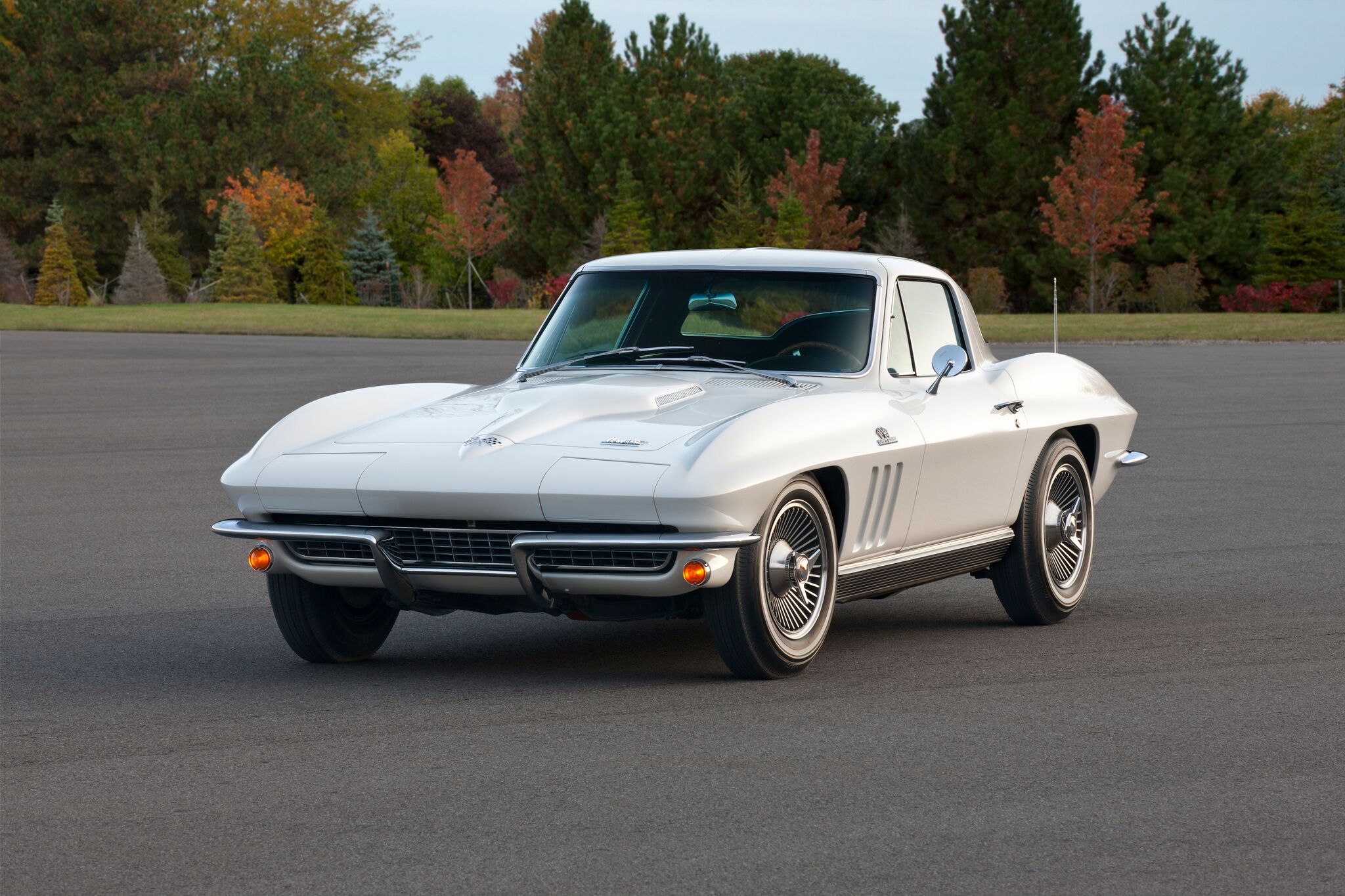 Büsser says that the design process for MB&F’s watches echoes their automotive sources of inspiration.

“In the 1950s and ’60s, first you would create bodywork — all drawn by hand, because there were no computers, then you’d take that, make it into a piece of clay, carve out that design, craft it, and do exactly what I do now — look at that prototype model from every single angle … You shave a bit off here, put a bit more clay on it there, change that shape. These were sculptures. Car creators were sculptors.

“When they found a shape that was really beautiful, then they looked at how to engineer this thing … how we make the engine, how we give it a drivetrain.” Büsser says it’s taking risks – like creating the HM7, which he (incorrectly)
predicted pundits would hate – that’s the biggest thrill. “If something’s easy, it takes away the adrenaline, takes a big part of the creativity … We have to spice
it up, take risks. Because pride comes out of taking risks, at least for me. 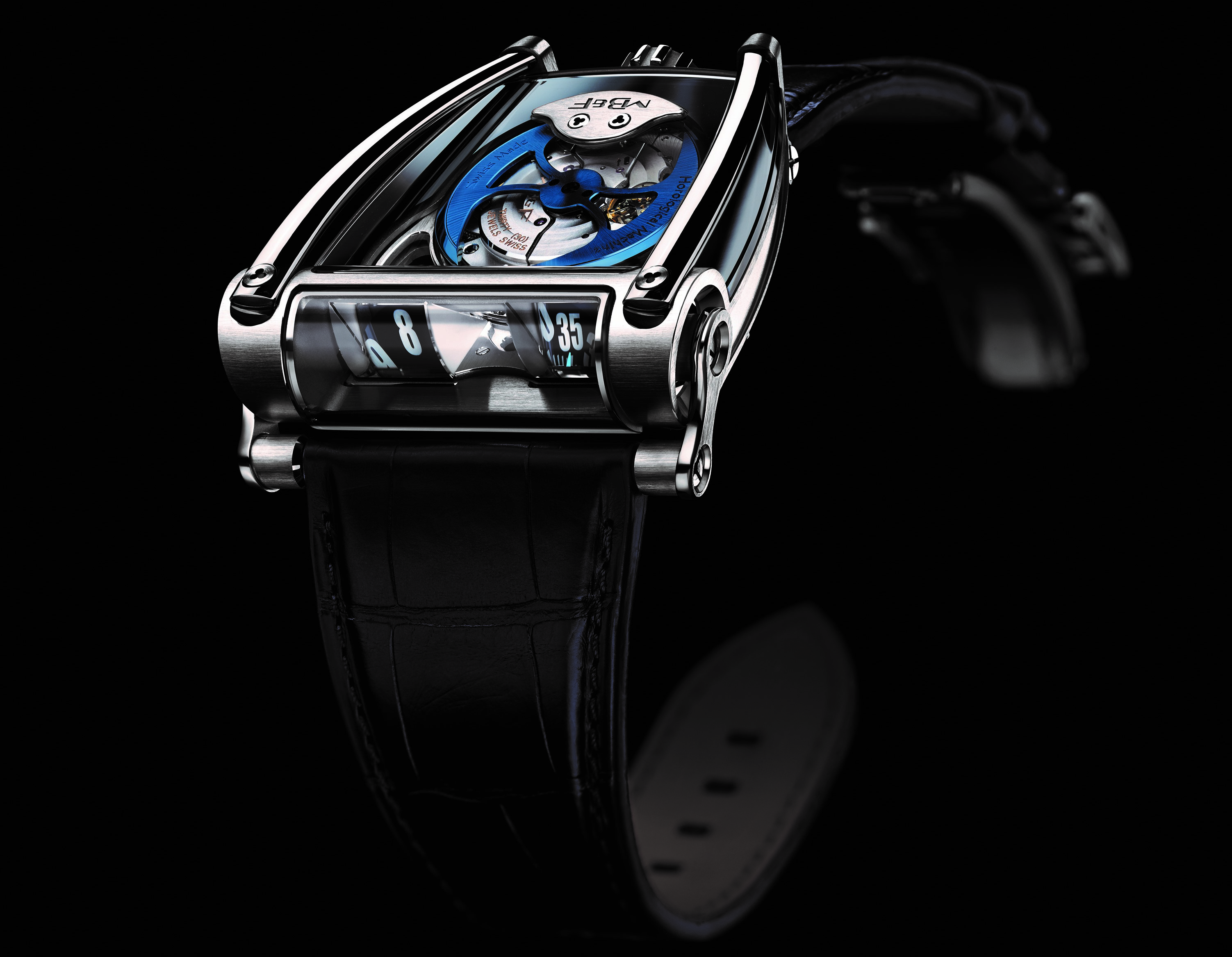 “Nobody’s ever proud of getting an easy thing done, are they?”

Büsser’s love for classic cars also springs from their unpredictability. “Older cars, clearly they’re dangerous to drive, they’re unreliable, but when you sit at the wheel of these cars, you feel alive,” he beams. “First of all, because you’re taking risks.

But there’s the sound, the torque, the smell of petrol, the smell of the leather… It was only 50 years ago they made these things, but it seems like a galaxy away.

“Today, you can be doing 300km/h while you’re reading your phone and drinking your coffee. But with old cars, you understand the whole concept of a driver’s watch” – timepieces angled for easy viewing while steering – “because you cannot let go of the wheel when you’re driving fast in one of those cars.”

Büsser’s automotive ‘Holy Grails’ include the eight-figure Alfa Romeo 33 Stradale, of which just 18 were built, and the Ferrari 250 GT Lusso. But he’s also a fan of more affordably priced, quixotic designs. “People look at me as if I’m insane, but I would love to have a (early ’80s rally car) Renault 5 Turbo engine at the back, looks like a big toad…That was one of the last crazy, insane road-legal cars.” 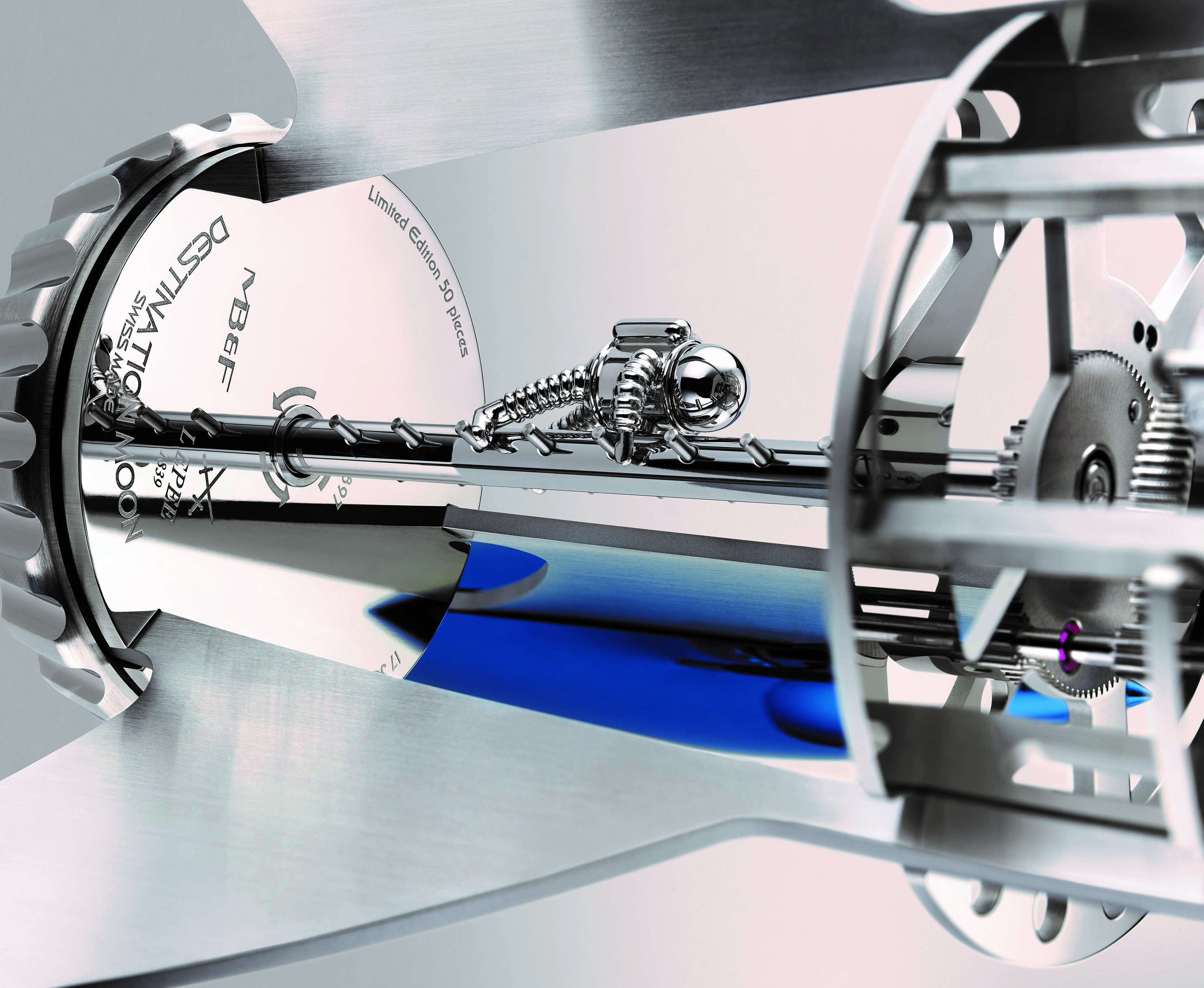 He also drools over the early ’70s Lotus Esprit, by design legend Giorgetto Giugiaro. “I’m always interested in what was the first,” Büsser says. “When the lines of cars were all rounded, along comes Giugiaro who just goes chop, chop!” Büsser mimes the designer slicing away the voluptuous curves pervasive in the ’60s, to create the ultra-angular Esprit, the first ‘wedge’ on wheels.

“When you have somebody who comes up with a new language, it’s like in art – in each era, there is always a tipping point, redefining art for the next decade or two. And those missing links, like Giugiaro’s Esprit or his VW Golf 1, which was the complete antithesis of the Beetle, those are for me the sign of an artist, a creator who went against the grain,” Büsser says.

The creativity Büsser admires, and the work he’s driven to do at MB&F, involves stepping outside the comfort zone, being unafraid to risk crashing and burning. “In all the arts, or in architecture and design, real progress happens when somebody goes, ‘This is my art, I don’t care if you like it – in fact it’s clearly not what you’re going to like, because it’s completely different to what’s come before … ’

“Most of them fail,” he admits. “But sometimes, they define the next era. To me, that’s what is interesting.”