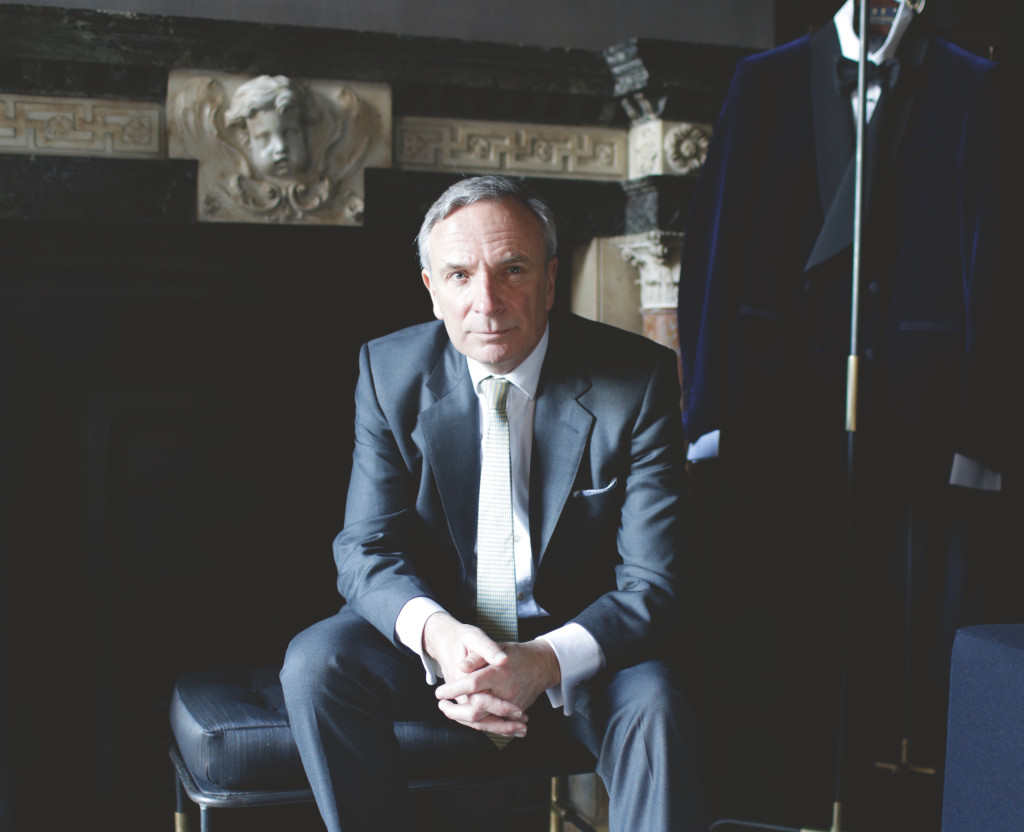 A leading light of the British luxury industry, Mark Henderson worked at Mary Quant, Thomas Lyte and Alfred Dunhill before joining Gieves & Hawkes – the Savile Row tailoring house of which he is currently chairman – in 1996. Also chairman of Proportion London, a manufacturer of high-end mannequins, Henderson co-founded The New Craftsmen in 2012 to showcase the work of British artisans and connect makers with patrons. Somehow finding time to also serve as director of Walpole, the UK’s luxury industries’ association, as well as QEST, the charity supporting young makers funded by the Royal Warrant Holders’ Association, Henderson lives in London and Dorset.

What’s distinctive about the British approach to luxury?

There’s often a humour to it – and a modesty. But Walpole exists to remind people that British luxury is also a very serious business – and one we’re very good at. We have a tendency to think, “Oh, the French and the Italians are the masters of luxury,” but then you sit in a place like this (Corbin & King’s Beaumont Hotel in Mayfair) and you think, “Where else in the world will you get this kind of service – warm and efficient but not at all fawning?” And just around the corner you’ve got The Connaught, and parked outside there’s that Rolls-Royce, and all around us there’s everything Mayfair has to offer, and down the road there’s Harrods … And you have to say well, actually, we’re rather good at luxury. I’d argue that Walpole played a part in giving us a confidence that we lacked 30 years ago.

How did you end up doing what you do today?

When I left school I didn’t know what to do. I worked in film for a while, I trained as a lawyer for a year, then I worked in engineering. But then I spent seven years working at Mary Quant and that was really the beginning. I’m quite hedonistic and I’d never do a job just because it paid well, though of course it’s handy if it pays well too. But looking back, I’ve had so much fun.

So, not a meticulously planned journey?

It’s been entirely organic. If you’d told me years ago that this was what I’d be doing today I’d have been delighted. The New Craftsmen – a start-up entering its sixth year – has been an extraordinary ride, and has reached heights I’d never have dreamed of in terms of the projects we do and the customers we work with. And QEST helps British craftspeople get from being good to being world-class.

What future do you see for British luxury?

That’s a timely question, as the industry is in flux. It’s had 500 years of unbroken growth, and luxury is changing all the time, but that growth is going to continue. Luxury is no longer about the big logo in gold. It’s about the choice to have exactly what you want. Consumers are valuing experiences more than mere objects now. You’ve mentioned before the “return of the patron” as a luxury trend …I work every third Saturday at The New Craftsmen showroom, and what’s exciting is that we’re only one step removed from the makers. People can come in and just buy something, but if you also want to go to the studio, we’ll set that up. It’s amazing to see someone who is extremely successful and wealthy who is extremely moved by seeing a beautiful object and meeting the craftsman who made it.

How does it make craft more human?

The craftsman has spent 10,000 hours learning the craft, and they’re encountering a man or woman who’s spent 10,000 hours learning to be very good at what they do – someone who has done something utterly different but in a sense it’s the same, because it’s all about excellence. Making things using your hands and your mind is an important part of being human. I’m a great crier. I get moved by something and the tears well. I cried when The New Craftsmen did the Makers House: there was 8000 sq ft of space that we worked up with Burberry and we had 30,000 people coming through that space.

What are your own personal luxuries?

I’m not a great buyer of things – I’m a great consumer of experiences, of travel, of food. Right now I am loving Londrino in Bermondsey, Portuguese chef Leandro Carreira’s first restaurant. His food is exquisite. I really enjoy diving, and last year we went to Borneo. We spent the last six days on an island called Maratua and every morning you walked onto the pontoon and you either went left down the reef or right. That was your day.

I collect (things by) a few of our makers. My favourites? My shooting suit by Davide (Taub) from Gieves & Hawkes, and at home I have the biggest piece ever made by the ceramicist Matthew Warner – a big bowl that sits in the middle of our living room. If my house was on fire, that’s what I’d grab – the suit and the bowl.