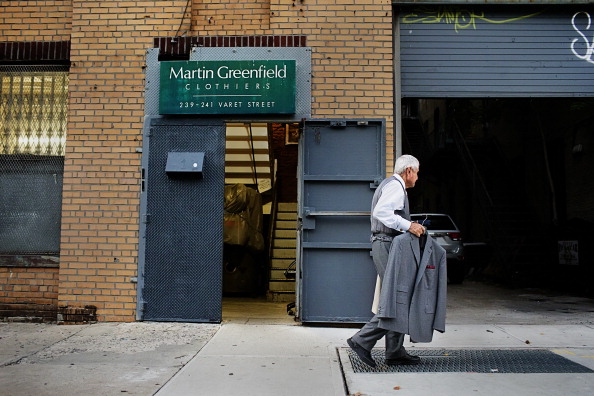 The holocaust survivor who has dressed Presidents from Eisenhower to Trump.

The story of Martin Greenfield is that of the American Dream, of a Holocaust survivor who arrived as a penniless refugee and went on to tailor for presidents from Dwight D. Eisenhower onwards. Now 89, Greenfield is still a patriarch of New York tailoring who turns up daily at Martin Greenfield Clothiers’ workrooms in Brooklyn, these days managed by his sons Jay, 59 and Tod, 57.Martin Greenfield’s first brush with high US office is an extraordinary story in itself. Born Maximilian Grunfeld in Czechoslovakia, he and his family were sent to Auschwitz concentration camp, where all but the 17-year-old boy perished; he was subsequently transferred to Buchenwald. That camp was liberated in April 1945 and soon after visited by then General Eisenhower, and Greenfield was among those who pressed forward and shook the general’s hand.

Greenfield spent the next two years searching Europe for surviving family members. Finding none, at age 19 he boarded a ship for the US and soon found work at GGG Clothing, a long-established Brooklyn clothier. Greenfield worked hard, developed his tailoring skills and in the early ’50s – less than 10 years after that trembling encounter at the Buchenwald camp – was commissioned to make a suit for then-presidential candidate Eisenhower.Indeed, in 1977 Greenfield would buy out GGG Clothing and the East Williamsburg building it occupied – to this day, the headquarters of Martin Greenfield Clothiers. When Robb Report Australia & New Zealand meets Greenfield there, he is wearing a navy waistcoat, a yellow satin silk tie with polka dots and a sky-blue shirt. 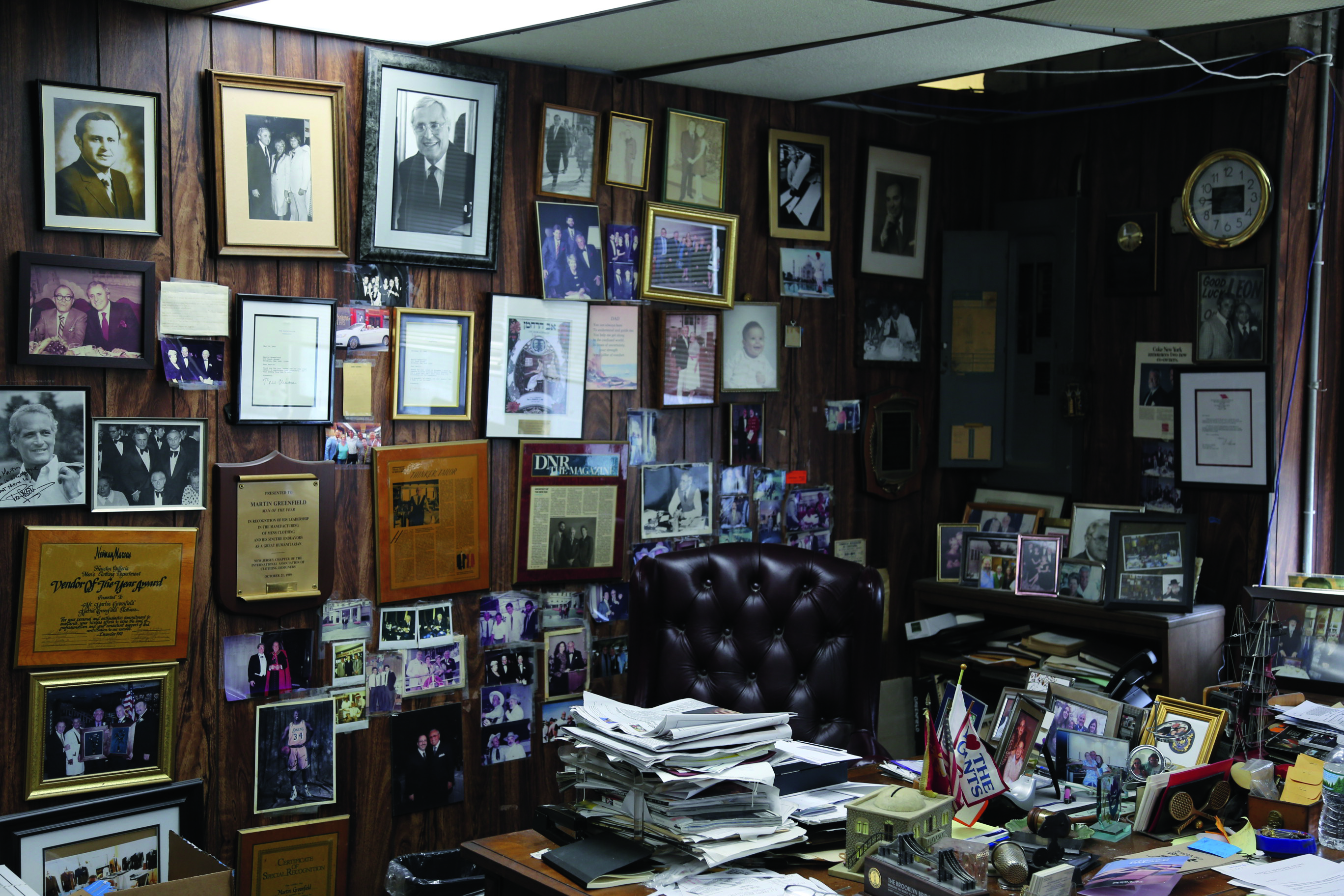 He is well-groomed, charming and has a movie star glint in his eyes that, even at 89, is only slightly misty. He moves quietly and deliberately around the factory floor, picking up a sleeve from one pile, inspecting it, lowering it carefully, and continuing on to the next work station. He finds interviews more difficult these days, preferring to let Jay, the older of his two sons, do the talking. However, seeing me on the factory floor, he approaches.

“Tonight there will be a television show about me, across Russia … (he pauses) … and China, Canada, America. Nine hundred million people will see it. Now everyone knows my name: Martin Greenfield.”

It seems to me that he knows the part he has played and he is enjoying the applause before the curtain is lowered. It’s not braggadocio; merely a statement of fact. Jay is proud to be a part of the business. He trained at a dental college before joining his father in 1981. He is laid-back in his attitude and in his clothing, wearing jeans, sneakers, an open shirt and gold necklace. He has a round face with a white beard and very clear blue eyes. Younger brother Tod, likewise far less formal than the father, joined the family business in 1982, having previously trained in theatrical lighting and set design. 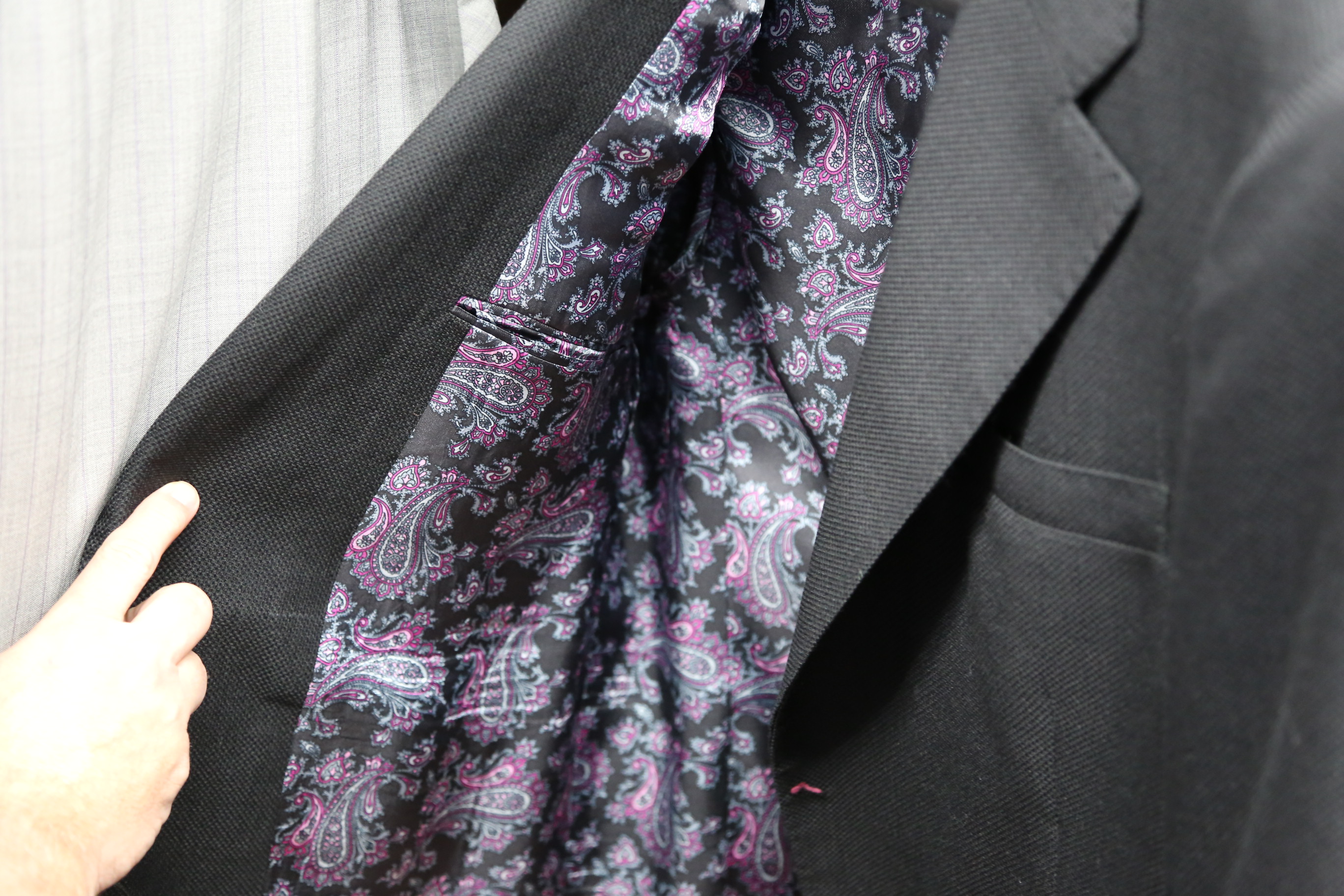 Jay explains that it was a tough business in the early ’80s, but the brothers helped Martin Greenfield Clothiers (MGC) to become more agile and try new things. Where it had been renowned for wholesaling suits for other businesses, today it offers a range of ready-to-wear suits, designs ranges for other labels, but perhaps most importantly, has bespoke suit programs as the majority of its output.MGC also works directly with film and television studios to produce character wardrobes. It figures: this is a veritable library of menswear, boasting an accumulated pattern database that dates back to the founding of GGG Clothiers at the turn of the 20th century. As Jay explains: “There is nothing that is designed these days that we haven’t already made in the past.”

With their archives now digitised, Jay has worked with celebrated costume designers like John Dunn, Ellen Mirojnick and Catherine Martin to create outfits for characters in television dramas like Boardwalk Empire, and films including The Wizard of Lies, The Greatest Showman, The Great Gatsby and Wall Street.MGC is one of the last great tailoring workrooms in New York and it doesn’t show any signs of slowing down. Every floor is buzzing with migrant workers – Martin is proud to say that the backbone of his business are the same refugees that he once was. Many are quite old themselves. Everywhere, obvious care and devotion is given to producing approximately 250 new suits a week.

While the rise of made-to-measure programs out of China has forced many western suitmakers to close their doors, MGC’s service carries on proudly and profitably. Jay believes those made-to-measure (or MTM in trade lingo) rivals provide a valuable feeder service for his company.

“We feel MTM is a great way for customers who cannot afford a bespoke suit to get a taste for it. And when they don’t get exactly what they want, the next time they’ll come to us. My father likes to talk about what is our ‘intrinsic value’ and we don’t stray from this. We make our own patterns. Hand-stitch a full canvas. We are a traditional maker of quality clothes.” 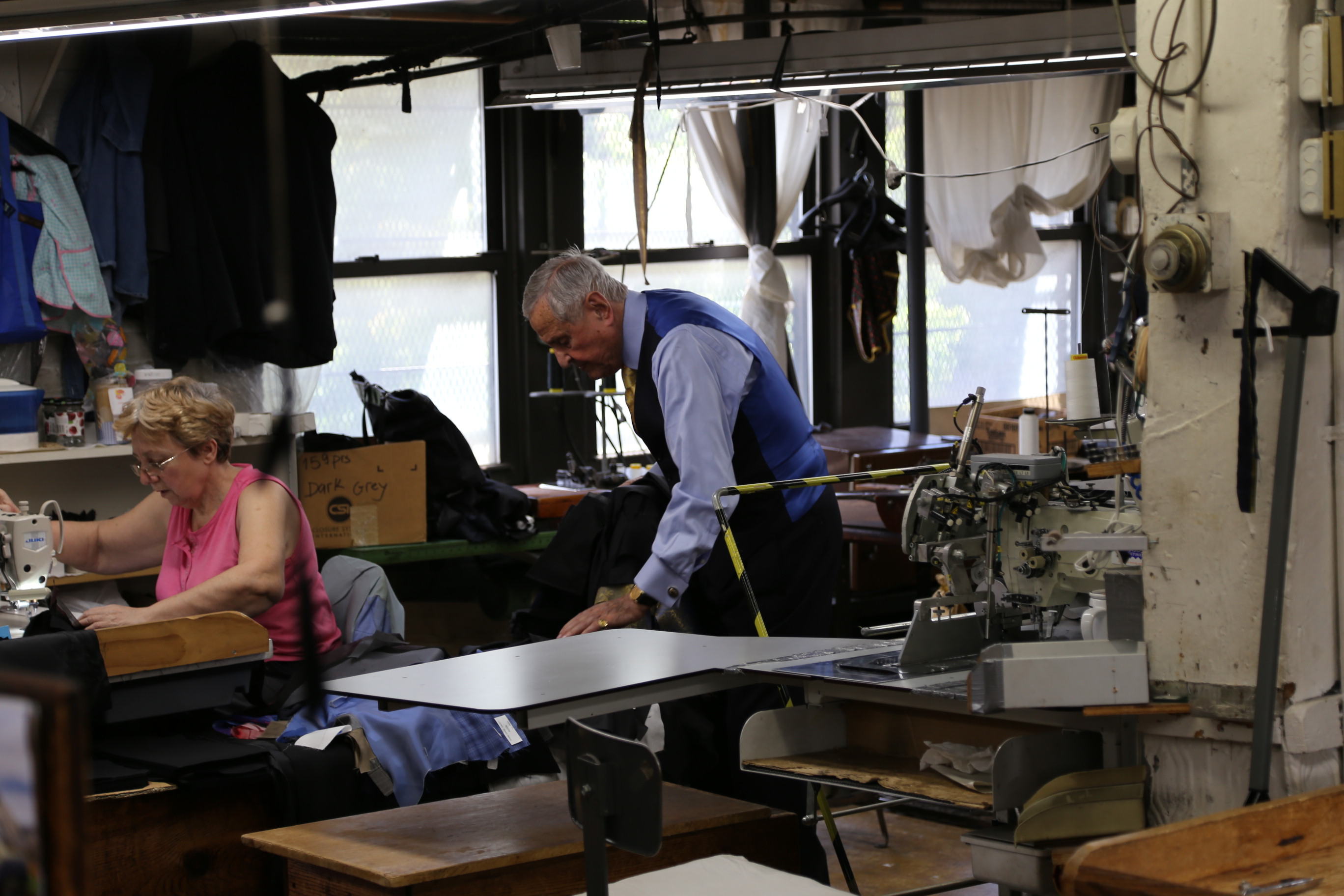 Few, if any, can beat the Greenfields’ track record. They have made slim and conservative navy suits for President Barack Obama, broad-shouldered and double-breasted crepe suits for President Bill Clinton. For President Dwight D. Eisenhower it was three-piece suits, and Martin would cheekily sew concealed messages inside, mentioning political issues on which he felt strongly.The timber slat walls of the workroom tell countless more stories: there are photos of presidents, business titans, entertainers and sporting stars – a veritable ‘who’s who’ of 20th and 21st century popular American culture. On Martin’s simple, basic desk, there’s a photo of him shaking hands with General Colin Powell, in a strict, three-button suit. Michael Bloomberg is in similar pose in another frame. Paul Newman looks on from a photo on the wall.

All around, it’s business as usual in the workroom. Trousers are made on the ground floor, jackets on the first. Administration and bespoke suiting is on the third. Bespoke tailoring appointments are normally done consecutively, providing privacy for clients. Those visiting on Saturdays enjoy complimentary bagels and coffee. All the measurements are done by MGC employee Michelle, who then translates them to a CAD pattern and prints them. 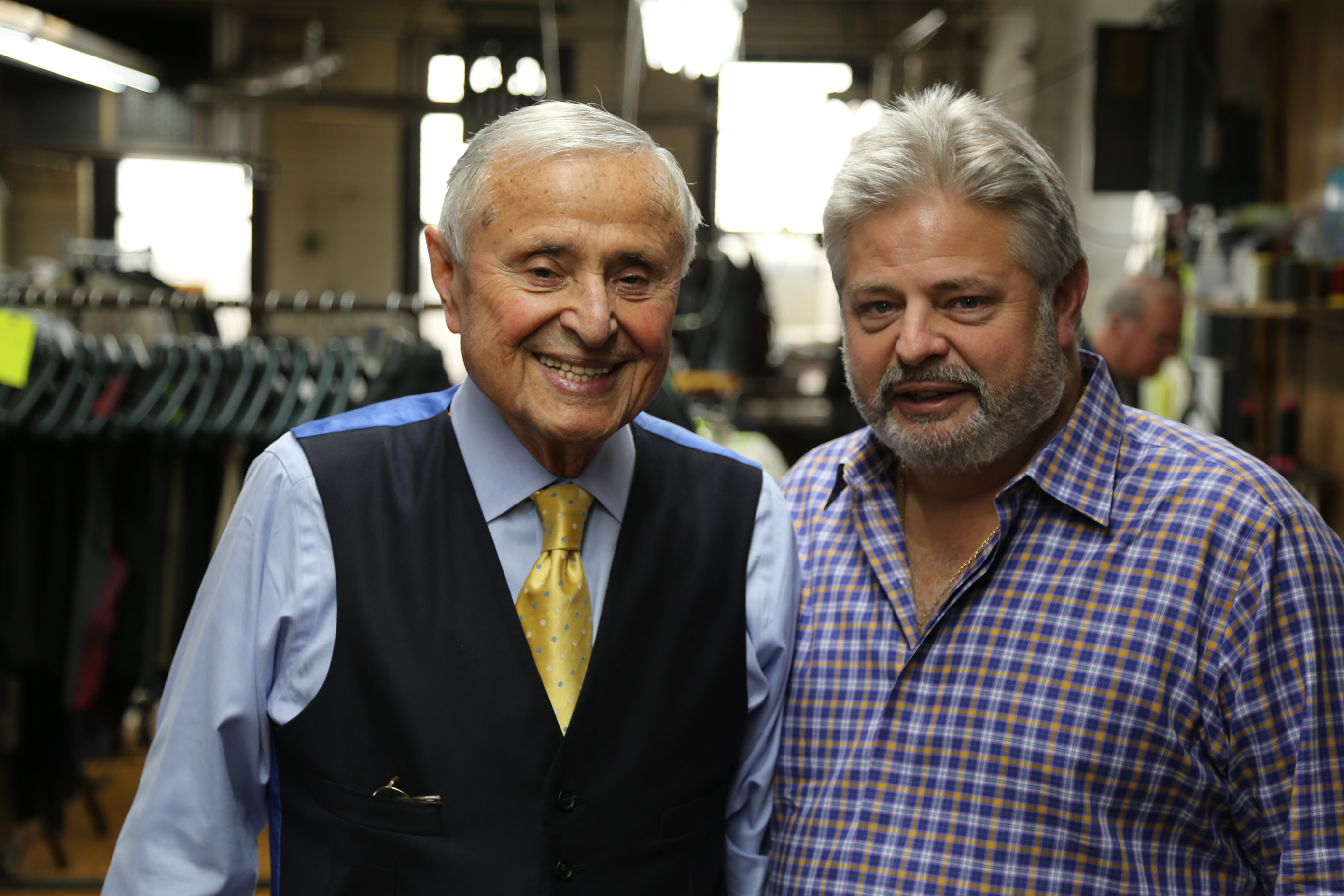 From this, the cloth is cut in their cutting room before being basted – temporarily assembled with basting thread – for a first fitting. A tailor, as Jay reiterates, is obviously critical to the process. The same person that makes your suit will alter and finish your suit. They control the total process. Martin’s ethos is that the customer should never feel that they paid for the fit-out; all the money should be in the suit.

It’s an old-fashioned philosophy that’s obviously working. Says Jay: “I know that we can’t make enough suits for the people that ultimately want us to make custom suits. We don’t advertise. We concentrate on what my father calls the ‘intrinsic value’ and we don’t dilute. “Look around you – nothing is fancy here and we don’t open fancy shops in Manhattan,” Jay smiles. “We just make great suits. We get great press and everyone finds us on the internet.”