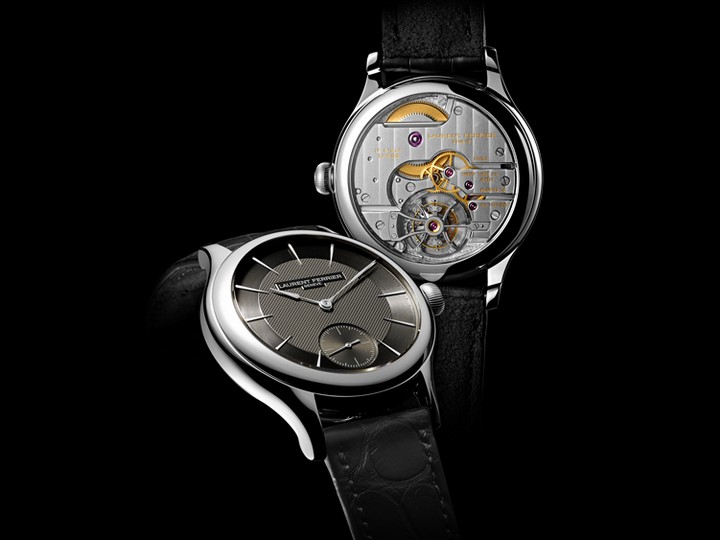 A sleeper watch may seem understated but it conceals a highly complex overall package.

A sleeper watch may have the external attributes of something simple and understated, but the outward appearance of this two- or three-handed timepiece conceals a highly complex (and often equally expensive) overall package. Flip a sleeper over and you have turned a coin; complication and horological extravagance abound, concealed by a sober and elegant dial.

In other words, a sleeper is the watch equivalent of the Audi RS4, which looks like a perfectly attractive dog-walker’s car of choice when in fact it’s a growling track weapon. The sleeper isn’t something that merely looks cheap but is actually expensive; rather, it is something that looks simple but is surprisingly complex. That complexity flies under most radars — enthusiasts with more than a passing interest in watches — yet it packs some serious horological firepower. A minute repeater is the ideal complication for a sleeper watch: high horology complication, no dial-indicator requirements, and a subtly positioned slider on the case band. The Patek Philippe 5078 is a minute repeater that almost passes for an entry-level 38 mm Calatrava, especially when the slider is concealed beneath a cuff. On closer inspection, one might notice the enamel dial, and the game is certainly upped when the slider is activated: On command, two hammers strike two gongs to indicate the time in a sequence of hours (first tone), quarter hours (second and first tone), and minutes (second tone). The A. Lange & Söhne Richard Lange Pour le Mérite (US$82,500 ($A105,400)) has a similar, refined look to that of the 5078; it’s perhaps even more subtle as it lacks a slider on the case band to hint at its sleeper status. This is not a chiming watch, and there are no additional indications — so what makes the Richard Lange Pour le Mérite so special?

Flipping any A. Lange & Söhne over is a treat; its details include a German silver three-quarter plate, a hand-engraved balance cock, and gold screw-down chatons for the jewels. But there is even more to this model: Small areas of the plate give way to reveal something more complicated. Indeed, those familiar with the brand may know that any watch with Pour le Mérite in its title will be armed with a fusée and chain mechanism. This is a highly complex solution to the issue of diminishing mainspring torque; the mainspring barrel is attached to a fusée cone wheel by a string of tiny links that resemble a bicycle chain. In the same way that a bicycle uses its chain to engage with different gears, the level of torque required to turn the cone diminishes as it unravels, countering the declining torque. It’s an age-old mechanism but is highly complicated for a wristwatch.

What makes the Richard Lange Pour le Mérite even more complicated is that the cone wheel uses planetary gearing to ensure that the watch runs undisturbed during winding. It employs two lever mechanisms to prevent overwinding and to halt the movement before power levels drop below optimal. This complexity is hard to convey visually and even harder to do so with words — the perfect sleeper. However, when H. Moser & Cie released its clean-dialed Endeavour Perpetual Calendar (US$60,000 ($A76,650)), the perpetual calendar sleeper was born.

On first glance, the Endeavour Perpetual Calendar conveys elegant simplicity with a sub-seconds dial and large date. On second glance, the reserve indicator at 9 o’clock becomes apparent. But the small third hand at the centre of the dial might go unnoticed, or will at least give little away as to its function. This hand indicates the month, with each hour register representing January (1 o’clock) to December (12 o’clock). The leap indicator is discreetly placed on the movement side, allowing it to be referenced on the few occasions that it is needed.

In the spirit of a sleeper, the Endeavour Perpetual Calendar appears simple when it is actually quite complicated — even down to the large date beneath the dial; you will notice that no single disc could deliver numbers of that size within the diameter of the case. The entire mechanism has been made foolproof by allowing the date to be changed forward and backward without causing damage to the delicate series of cams and star wheels that govern a perpetual calendar. There is a growing number of watch manufactures capable of creating a tourbillon — a significant and complicated undertaking in its own right. However, this list drops to just a handful when you filter it for watches with tourbillons that are concealed beneath a full dial; plus, there are almost no manufactures that go as far as to both conceal the tourbillon and restrain themselves from writing ‘Tourbillon’ on the dial.

With the more commonplace Galet Classic Tourbillon Double Hairspring (CHF 180,000 for the gold version), Laurent Ferrier prints “Tourbillon Double Spiral” in faded ink on the enamel dial, but it’s the Clou de Paris Guilloché Dial iteration that achieves full sleeper status. This time-only watch in white gold makes no mention of a tourbillon on its hand-guilloché dial — and this is no ordinary tourbillon. As with its wider range of tourbillon watches, Laurent Ferrier uses two hairsprings to “neutralise the lateral displacement of the balance axis.” This is more complicated and more understated than your average tourbillon — a true sleeper.

Other notable sleeper tourbillons include the Voutilainen Piece Unique Tourbillon Wristwatch, which uses a detent escapement (highly unusual in a tourbillon), and the F.P. Journe 30 Years Anniversary Tourbillon, which conceals the tourbillon even more behind a solid, hinged caseback. The Philippe Dufour Duality is one of the rarest sleepers, as it’s no longer in production and only nine examples were ever produced. The 34-mm white-gold case, silver dial, and rhodium-plated hands are at the very height of sobriety. But turning the watch over will reveal one of the most exceptionally finished and unusual movements ever produced.

The Duality has two escapements and balance wheels. They are powered by the same mainspring and linked by a differential gear the size of a matchstick head. A close inspection will reveal thick Geneva stripes, black polishing, and brilliant anglage along the edges of the plates and cocks. The Duality is a masterpiece of finishing, accented by the quirk of a dual escapement. The signature of the watch takes the form of two chamfered and black-polished “horns” on the part of the plate that affixes the differential gear. The Grand Seiko Spring Drive 8 Day Power Reserve (US$55,000 ($A70,250)) is a heavyweight sleeper. It is complicated and finely finished, with a sleeper status further leveraged by the connotations of its branding. Although in 2017 Seiko and Grand Seiko became autonomous brands, there is no mistaking the barriers that arise when even indirectly associating a piece of high horology with one of the highest-volume brands in the world — and one not in Switzerland, for that matter.

Simply put, for Seiko’s high-tier brand Grand Seiko to impress, it has to cross beyond this barrier. As such, the brand is enjoyed with relish by the introvert and the troublemaker alike. The introvert enjoys fine quality without being judged for broadcasting it; the troublemaker takes pleasure in seeing the watch dismissed by those with lesser knowledge or narrower tolerance.

In the realm of the sleeper, a Grand Seiko is immediately at an advantage. The Spring Drive 8 Day Power Reserve has the initial appearance of a Grand Seiko, which in turn loosely resembles any other Seiko model. This is the case with the SBGGD001, which holds the pre-brand-split Seiko branding in large font at 12 o’clock (and therefore carries even higher sleeper status than the current model). However, a closer inspection of the dial will immediately captivate. The platinum case provides notable heft, the polished hands and markers are immaculate, and the diamond-dust dial with blued-steel seconds hand offers the subtlest of accents.

The caseback view of the Spring Drive 8 Day Power Reserve is unparalleled. A movement-side 8-day-reserve indicator keeps the dial-side uncluttered, with a near-full-brushed plate depicting Mount Fuji in finishing (anglage) along its edge. It’s an immaculate aesthetic but unusual in that there is no visible balance wheel. This is because a Spring Drive movement has a constantly rotating glide wheel regulated by the combination of a quartz oscillator and electromagnetic brakes. As a result, both the glide wheel and the seconds hand move without any oscillation or judder. It delivers the accuracy of quartz with the aesthetics of a mechanical watch, and in the Spring Drive 8 Day Power Reserve, it achieves the finish of the very finest timepiece.