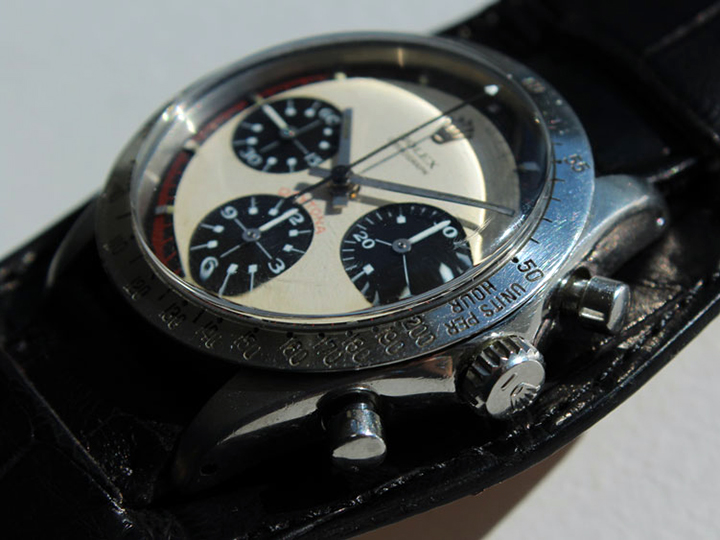 How and why Paul Newman’s Rolex sold for $23 million

The star’s Rolex Daytona has cemented its place in the record books, setting a new mark for watches at auction.

Well, it’s official. With a final sale price of $US17,752,500 ($A23.1 million) including buyer’s premiums and fees, Paul Newman’s Rolex Daytona 6239 has officially become the world’s most expensive wristwatch ever sold at auction, blowing away the previous record holder (the Patek Philippe ref. 1518 in steel) by over $US6.6 million.

At an absolutely packed house at the Phillips Auction gallery in New York, collectors and enthusiasts alike waited with bated breath to see if the piece would meet (or exceed) the widely speculated target of over $US10 million; they weren’t to be disappointed.

From the moment the sale of Lot 8 began, spectators both in the room and online wound up feeling slightly robbed, as the opening bid (aside from an absentee starting bid of $US1 million) came in instantly over the phone. In one fell swoop $US10 million was bid, and the pile of bidders in the room that had been hoping for that experience of throwing in a bid in the $US2-$8 million range were left to sit back and see how the balance of the back-and-forth would play out. From there it was effectively down to a pair of phone bidders, incrementally eking their way to the final hammer price of $US15.5 million. At this time zero indication has been given of who the mystery buyer was, leaving many of us to wonder if the piece will be heading for a locked vault, or if the watch collecting world will be fortunate enough to see it find a home in the Rolex Museum, the Smithsonian, or another public venue where this piece of history can be enjoyed by the public at large.

Now that we have covered the how, the bigger question remains, of how was it that the final bid on Paul Newman’s Rolex Daytona was miles above and beyond the next most expensive Daytona ever sold?

At an apples-to-apples level, Newman’s watch is by no means the most pristine Daytona out there, nor is it a reference that’s less common than other examples that have traded hands in the past. What sold this piece is its connection to Paul himself, the extensive imagery of him wearing the piece, and most of all the fascinating story of how the watch moved around from Newman’s wrist to the auction floor (more on that below).

The fact that an unnamed percentage of the sale’s proceeds was earmarked for charity could have been a small part of the equation, though even there the percentage or dollar amount was never disclosed, and the charity angle rarely mentioned in the extensive coverage leading to the sale. When you combine an already beloved collectible item with this level of celebrity and history, the rhyme or reason of valuations has to be thrown out the window, leaving us only with the speculation and buzz that surrounded this sale from its announcement in June through to today.

The word iconic is much-used these days, though in the case of the Rolex “Paul Newman” Daytona, the adjective could not be more fitting. When Newman was filming his first racing-themed film, Winning, Rolex dealers couldn’t get the early “exotic dial” Daytonas off the shelves. After this 6239 began to appear on the actor’s wrist, that challenge abated. Decades later, the now-famed Rolex Daytona is one of the most coveted chronographs ever. Initially gifted to Newman by his wife, Joanne Woodward, the actor’s personal Daytona bears the inscription, “Drive Carefully. Me.” Woodward often worried for her husband’s safety when he took to the track, and her words served as a reminder to him on race days. Newman wore the beloved Daytona constantly before gifting it to his daughter Nell’s then long-term partner, James Cox. Nell recalls to this day her father’s pride in the accuracy of his watch, going so far as to place the occasional gentleman’s bet with his guests about whose timepiece was more accurate. The timeline mark of a winner

Rolex produces the first Cosmograph Daytona, Reference 6239. The name is intended to bolster awareness of the brand’s involvement in American motorsports.

Paul Newman stars with his wife, Joanne Woodward, in Winning. The film becomes the trigger that ignites his obsession with racing. Woodward gifts Newman the Rolex Daytona 6239.

Newman takes to the track in his first races with the Sports Car Club of America at the wheel of a Lotus Elan, leading to multiple SCCA championship wins between 1976 and 1986.

Newman’s daughter Nell meets James Cox at the College of the Atlantic in Bar Harbor, Maine.

Newman gifts his Daytona to James in thanks for his restoring the old tree house on the Newman family estate in Westport, Connecticut.

Newman succumbs to his battle with lung cancer at his Westport home.

Nell Newman and James Cox consign the Daytona to Phillips, with a portion of proceeds being donated to the Nell Newman Foundation.