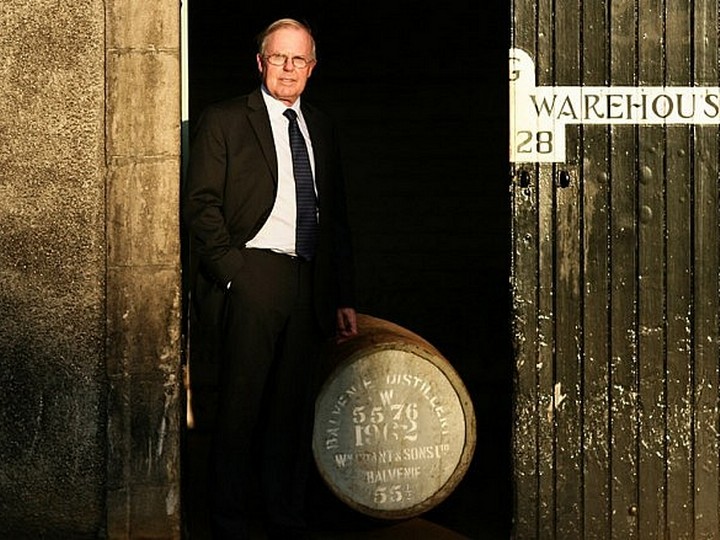 After decades as the head blender at The Balvenie, David Stewart looks back on a lifetime of achievement.

David Stewart has been The Balvenie’s head blender since 1974. His whiskies have won multiple awards, he’s the recent recipient of an MBE from Queen Elizabeth and suffice it to say, what he doesn’t know about whisky probably isn’t worth knowing. But as with all great stories, his journey with The Balvenie started out almost by accident. The 17-year-old Stewart joined William Grant & Sons (The Balvenie’s parent company) in 1962 as a stock clerk after responding to a newspaper advertisement.

__
From clerk to head blender, that’s a big jump, no?__
I had no idea I was going to be trained to be a master blender. I joined up to do clerical work, and for two years, that’s all I did. It was only after two years that I was brought into the sample room. A member of the family said to him (the previous master blender) ‘you should really start training someone else up, because you’re the only person who knows our whisky’. He eventually left to join another distiller and I was left, really, to carry on with things.

That’s a lot of responsibility for a 29-year-old to have, isn’t it?
The family was looking around to bring someone else in, but they couldn’t find anyone. So, after six months with no great disasters and no complaints about the whisky, they told me ‘David, we’re going to give you the job; you’re going to be our master blender’. It was quite a frightening thought at the time.

You officially retired in 2009, but it seems you’re still very much involved with The Balvenie.
I’m semi-retired. I come in to work maybe two days a week, so I’ve got quite a good balance right now. I’ve got time for holidays, family, grandchildren, but still have a great involvement with The Balvenie creating whiskies. I still love the job, being at the distillery, meeting people, but someday I’m going to have to give it up completely.

More on that. One day, your name won’t be on the bottle anymore, have you ever given that any thought?
Well, that’s true. With the way we run things and the consistency we have that won’t change. Someone else’s name will be on the bottle, but our whisky is still going to taste the same. Brian (Kinsman, The Glenfiddich’s head blender) is also involved with The Balvenie.

Do you think you’ll ever come out of full retirement one day and say this is not the way The Balvenie should be?
I don’t think that’ll happen, to be fair. We’ve got formulas and the consistency, so I’m not worried. New things will come out, as they have with Glenfiddich since I moved away from it, but the core range is still there. I’m confident things will carry on. Obviously, the ones that we see on the shelves are the successes.

Were there any experimental product lines that didn’t make the cut and you had to start over?
Some of our wine finishes haven’t been successful, in that they didn’t really improve the whisky, which is disappointing. We’ve tried finishing whisky in pinot casks, which didn’t work for us. The thing about this job is you have to be patient – nothing happens immediately.

You’ve had a half-century with the distillery and the DCS Compendium, which is a fitting tribute to your time there. Are you happy with your legacy or would you want to have done anything differently?
I’m quite proud of what I’ve done over the years with The Balvenie. I’ve been very lucky it was a great whisky to start with, so it’s made my job easier. I’ve got The Balvenie on a good footing for the future, so I’m happy with that.