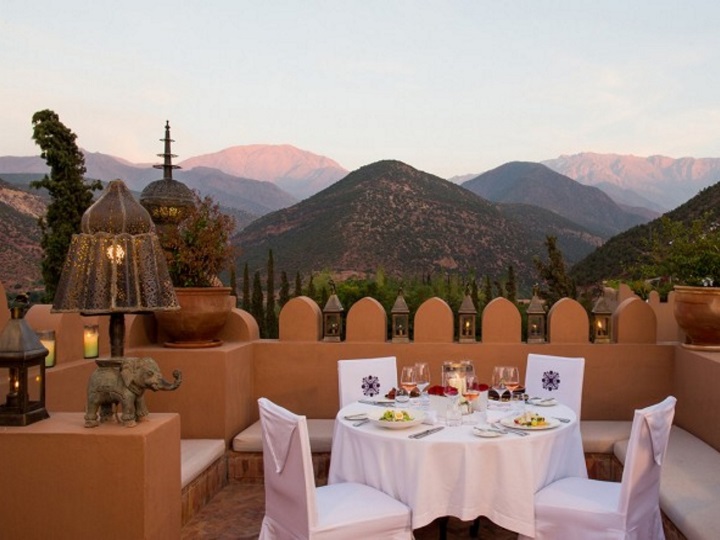 Ten of the world’s most romantic restaurants

Based on setting, ambience, wine lists and cuisine, these are the venues to turn a romantic moment into one you’ll never forget.

If the way to a man's heart is through his stomach, as the adage claims, then these world-class restaurants should aid Cupid in his task. The 10 romantic venues should set the stage for more to come, based on their setting, ambience, and decor to match their A-list service, wine lists, and cuisine. The "Press for Champagne" button at every table sets the tone at this glamorous London eatery featuring British and Russian classics, such as caviar starters, beef wellington for two, and sour-cherry soufflé that will sate a sweet tooth. Bob Bob Ricard is the only UK restaurant serving Chateau d'Yquem by the glass. (bobbobricard.com) Commence an amorous evening in Bali with the eight-course Indonesian Degustation at the white-cloth CasCades Restaurant overlooking the verdant Valley of the Kings. Chef Nic Vanderbeeken makes magic at the table with such offerings as curried king prawn, duck breast with long bean, coconut and spinach, and Balinese pork belly with chili-pumpkin tamarind sauce. (cascadesbali.com) Chef Franz Mulser is the culinary wizard at this nine-table hideaway in the meadows of the Trentino-Alto Adige region near the Austrian border. After cooking in top European restaurants, Mulser returned to his family's farm to share his gourmet interpretations of the region.

Inside a rustic alpine cabin, savour such creative offerings as hay soup with foraged wildflowers and herbs, braised lamb with gathered berries, and sweet, fried nuggets of batter crowned with powdered sugar and rose petals. Gostner Schwaige is accessible by foot, air, or a horse-drawn carriage (arranged in advance). (aussergost.com) Talk about being in your own private bubble. This intimate six-table dining room at the Conrad Maldives Rangali Island lies almost five metres under the sea. Watch fish dart by while enjoying a six-course dinner featuring such items as Maldivian lobster and red-fish tartare with passionfruit sauce and beef tenderloin with apple and goose-liver tortellini. (conradhotels3.hilton.com) Deep in the Atlas Mountains, you'll find this Kanoun Restaurant inside Kasbah Tamadot, one of Sir Richard Branson's Virgin Limited Edition luxury retreats. Under the starlit sky among flickering candles, sip cocktails at the fireside bar before forking into richly spiced tagines, braises, and couscous dishes made by local Berber cooks using regional ingredients, including many grown on property. (virginlimitededition.com) Paris oozes passion, and dozens of the city's storied restaurants can set the heart aflutter, including this Michelin three-star eatery dating back to 1856 in the Bois de Boulogne. Begin the meal with some bubbly from the trolley of Champagnes, part of the 30,000-bottle cellar. Then, tuck into chef Frédéric Anton's refined dishes, such as roasted venison, langoustine ravioli with foie gras cream, and a trio of tangy lemon desserts. (restaurant.leprecatelan.com) Overlooking the shimmering lights of Victoria Harbor, this Cantonese restaurant in the Four Seasons Hotel Hong Kong was the first in China to receive three Michelin stars. Chef Chan Yan Tak serves a wealth of dishes, including steamed foie gras with abalone and goose web sauce, wok-fried lobster with garlic, and more than a dozen preparations of Bird's Nest Soup. (fourseasons.com) This newly opened Sonoma Valley restaurant has its own on-site produce farm and inn run by chef Kyle Connaughton, who trained in England and Japan, and his wife, the resident farmer. Together they offer three 11-course tasting menus — including one vegetarian — in a warm, Asian-inspired room.

The hyper-seasonal dishes change often, but might feature turbot with winter vegetables and chamomile dashi and a hearth-cooked sweet potato with chicory ice cream, cocoa husk, and hazelnuts. SingleThread reservations are purchased in advance as tickets. (singlethreadfarms.com) Solo Per Due, Italy

It's hard to rival the romance of dining in the world's smallest restaurant. Located in the lush village of Vacone, this "only for two" eatery has just one table. Chef-owner Remo di Claudio and his son, Giovanni, serve antipasti, pastas, and entrees made with local olive oil, meats, wild mushrooms, sheep's cheeses, and orchard fruits. Sweets include homemade tiramisu, adorned with a white chocolate heart. (soloperdue.it) An edible fairytale for two stirs the heart at this fabled modern Russian restaurant under a glass dome overlooking Moscow. Chef Vladimir Mukhin shares Russia's culinary history via his seasonal tasting sets, featuring items like the Scarlet Flower, an apple puree with honey and radish that harkens back to a time when flowers and plants were used for medicine. White Rabbit's Gastrobar tells its own tales, like a recent gastronomic performance of _Alice in Wonderland_. (whiterabbitmoscow.com)