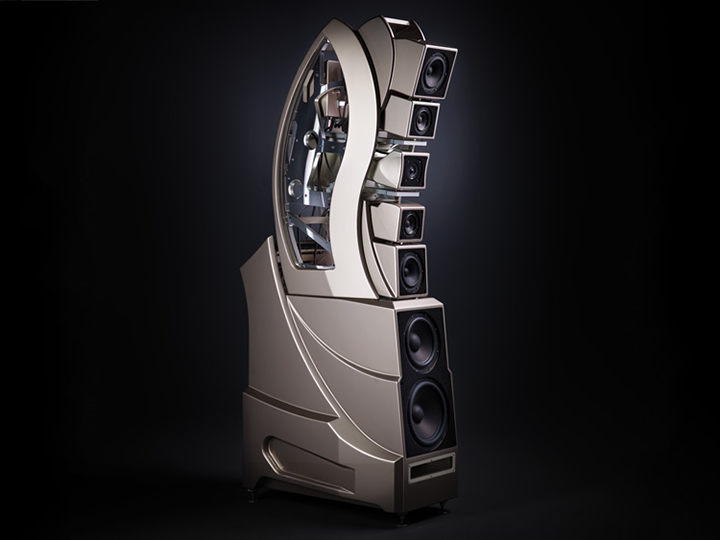 Seven gifts for the discerning technophile

Shopping for standout electronics can be tough for even the geekiest gift buyers. If you know that your recipient expects only the coolest, newest, and best but you don’t know a coaxial cable from a coaster, you may find yourself hitting the eggnog early. This holiday season, there’s no need to stress. Here, we present seven gifts sure to satisfy the audiophiles, amateur drone pilots, A/V aficionados, and devotees of all things digital in your life.

And if you’re looking for more luxury gift ideas, check out the complete Robb Report Ultimate Gift Guide for 2017, which includes inspirations in every category from cars and watches to fashion and travel, and more. Thirty-six years after the Wilson Audio Modular Monitor (WAMM) loudspeaker was introduced — the brand’s very first consumer product — the Utah audio manufacturer has revisited the adjustable modular-driver concept that underpinned the original model. The resulting speaker is one of the most captivating audio releases of the year.

Standing more than 7 feet tall, the WAMM Master Chronosonic is a looming monolith of audio innovation. Its sculpted, curvilinear cabinet accommodates seven drivers housed within separate enclosures: a silk-dome tweeter, two midrange drivers, and two woofers, along with a rear-firing tweeter and a rear-firing midrange driver. The modular system allows the positioning of each driver enclosure to be manually adjusted to calibrate the length of time it takes the sound from each unit to reach the listener’s ear down to 5 microseconds. This process reduces audio degradation due to timing errors, making the speaker sound much more lifelike.

But the WAMM’s appeal extends beyond its modular configuration. Other standout features include an adjustable port on the bass enclosure that can be switched between the front and rear of the speaker to accommodate different room types, as well as the employment of advanced dampening materials in the construction of the enclosures.

The fortunate audiophile who receives this gift will be in rare company, as production of the WAMM Master Chronosonic is limited to just 70 pairs.

## Go your own Huawei Everyone is familiar with the Apple iPhone X, but for the jaded technophile who wants something even more exclusive, the Porsche Design Mate 10 from Huawei — which overtook Apple not long ago to become the second-largest smartphone manufacturer in the world — may be just the gift they need to stand out from the crowd this holiday season.

Like the standard models, the Porsche Design special edition of the Mate 10 has an extra-large screen (6 in) that extends nearly edge to edge. It may not unlock via facial recognition like the iPhone X, but a fingerprint reader is positioned on the back of the phone for easy unlocking. It’s equipped with two rear-facing Leica-developed cameras (a 20-megapixel monochromatic camera and a 12-megapixel color camera) that can quickly recognise faces and other objects — as well as the type of scene being photographed—and adjust settings accordingly in real time courtesy of its dedicated neural network processing unit (NPU).

The Kirin-made NPU was designed specifically to support artificial-intelligence-based features, meaning AI processing can be done right on the phone instead of by accessing cloud-based services like Siri. This allows those same tasks to be accomplished without relying on the phone’s Internet connection (and with fewer privacy concerns). Perhaps most enticing of all to frequent travellers, it provides the acceleration necessary to power the Mate 10’s real-time translator, which can instantly translate text and voice into more than 50 languages.

Though it largely shares the same features as the Mate 10 and Mate 10 Pro, the US$1,645 ($A2200) Porsche Design version includes some cosmetic flourishes that elevate it above its stablemates. It comes in an exclusive colour (Diamond Black), features a custom user interface, and has twice as much onboard memory (256 gigabytes) as the Mate 10 Pro. It also comes with a leather flip case and a USB-to-stereo jack adapter for those not yet willing to completely ditch their wired headphones. If you’re looking to win an audiophile’s adoration this season, consider one of Audeze’s latest explorations into the extremes of audio design: the US$2,500 ($A3300) LCDi4 in-ear headphones. The California-based hi-fi manufacturer was the first in the world to offer planar magnetic in-ear headphones (the iSINE10 and iSINE20), and the new LCDi4 is the ultra-high-end interpretation of that same innovative concept.

First thing’s first: I have never heard in-ear headphones with a better soundstage. Listening to a CD of the 1957 Riverside recordings of Thelonious Monk and John Coltrane, I perceived a real sense of space, almost as if the entire studio were surrounding my head. The LCDi4 offers a sense of dimension that expands far beyond the headphones themselves — a highly desirable trait to fans of jazz, classical, vocal, rock, or any other music genres where instrument placement is important.

Another noteworthy characteristic of the LCDi4 is its completely natural presentation. Every frequency range is just right, and nothing is out of place, romanticised, or overemphasised. Both ends of the spectrum blend effortlessly; I could hear the highest highs and the full extension of the bass below. The high-frequency sounds sparkle, and the full bass notes had great extension and slam, evidence of the LCDi4’s astounding frequency response floor of 5 Hz.

The open design means your giftee will need to enjoy them in a quiet environment. But that’s okay — the LCDi4s are best enjoyed in an armchair with a salt malt in hand. One of the coolest rangefinders of the year, the 2017 Pro X2 is packed with familiar Bushnell features and valuable new ones. To ensure the rangefinder conforms to United States Golf Association guidelines, Bushnell has incorporated Slope-Switch technology into this year’s model, allowing golfers to switch off the company’s patented slope-compensation function — which measures the true distance of a hole based on incline or decline — during competition.

Another twist that was added to this year’s model is dual-display technology that lets golfers pick either a red or black display, depending on which is more visible under the current conditions. A nice returning feature is PinSeeker with Jolt Technology, which gives the rangefinder a good shake when you have locked onto your target. All this comes in a waterproof, ergonomic package starting at US$500 ($A660). Perfect for a favored film buff who always needs the latest and greatest, the astonishingly thin 77-inch (195 cm) LG Signature OLED TV W7 offers all the features one would expect from a contemporary high-end television — 4K support, high dynamic range video, Dolby Atmos sound, and smart applications — but what really sets the new TV apart from the competitors is its svelte form factor.

Unlike LG’s previous generation of ultrathin TVs, which comprised an organic light-emitting diode (OLED) panel attached to a sheet of glass for support, the W7 series features no backing of any kind. The result is a panel so thin (less than half a centimetre) and lightweight (12 kilograms) that the entire 77-inch (195 cm) set can be hung directly on a wall using only magnets for support, getting just about as close to flush with the surface as possible. This bleeding-edge, ultrathin design does come with a drawback: Without glass to support the panel, it cannot be set up on a stand. So you might want to make sure your recipient has a nice, big, free wall. Industry-leading drone manufacturer DJI has issued quite a few exciting releases over the past year — including the Spark, the company’s first selfie drone. One of its most exciting recent announcements is an upgrade to its popular Mavic Pro that increases its maximum flight time and reduces its noise output.

The DJI Mavic Pro Platinum retains the compact size and folding-arm design of the original as well as all of its features, including the ability to lock onto subjects and follow them as they move, shoot video in 4K, and detect and avoid objects in its flight path. Its camera is mounted on a three-axis gimbal to provide greater control over the shots you take, and it even has social-media integration that allows you to edit and post from within the DJI smartphone app.

The Mavic Pro Platinum is priced at US$1,100 ($A1500), although the Fly More Package, which includes extra batteries and other accessories, is also an option for an additional US$300 ($A400). Last year, Swedish brand Hasselblad introduced the X1D-50c, a medium-format digital camera with a take-it-anywhere compact form factor. Now, the company has made the camera an even more convenient companion for adventurous photographers with the new X1D Field Kit, an all-in-one package built for those who prefer not to keep their cameras cooped up in the studio.

Priced at US$17,495 ($A7900), the Field Kit comes with all the equipment needed to shoot in a variety of conditions. Of course, the heart of the kit is the X1D camera (available in silver or black), which utilizes a 50-megapixel CMOS sensor to capture images and has an extended ISO range of up to 25,600. It also includes three XCD lenses — a standard 45-mm lens, a 30-mm wide-angle lens, and a 90-mm lens perfect for portraits — designed with a compact form factor to match that of the X1D.

The kit also comes with an extra battery — meaning you’ll never have to stop shooting for a recharge — and a cleaning kit to keep the system in perfect condition while on the go. The entire package can be stowed in an included Pelican carrying case, which features a custom-cut foam insert that allows quick and easy access to all of the various components.

The X1D Field Kit is a great all-in-one option for your favorite shutterbug, and considering that the retail price of the X1D and the three included lenses is over US$19,000 ($A25,250), the package represents a great value proposition, as well.