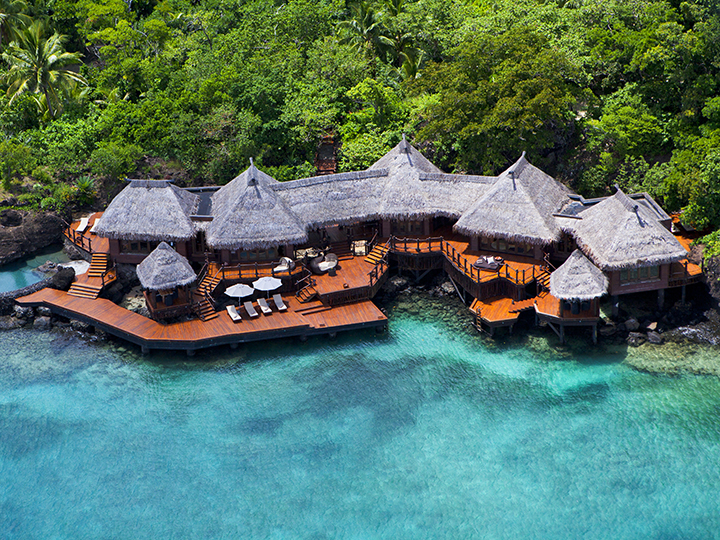 Treading lightly on an island paradise

Since Cyclone Winston, Laucala Island has been carefully managed to rejuvenate the landscape as well as refurbishing the resort.

Austrian billionaire and Red Bull co-owner Dietrich Mateschitz is serious about sustainability, leaving 80 per cent of his privately-owned Laucala Island untouched. So when Tropical Cyclone Winston devastated large swathes of the South Pacific in February 2016, Mateschitz – someone hardly lacking in energy – took his time reopening the exclusive island resort, allowing for the rejuvenation of the landscape as well as a refurbishment of the resort’s buildings. Since its reopening in July last year, Laucala has also welcomed a new executive chef, Jean-Luc Amann, who cooked for guests such as Princess Diana and King Abdula of Jordan during his stints at The Peninsula Hong Kong and the Al Bustan Palace, Oman. Classically trained in France but with a passion for Asian flavours, Amann has embraced the resort’s paddock-to-plate philosophy. Eighty per cent of the produce used in the resort’s five restaurants and bars comes from the island, with crops such as vanilla, pepper, teas, fruits and vegetables, and animals including poultry, cows, pigs, quails, Peking ducks and coconut crabs all raised organically on its 240-acre farm. Even the products used in Laucala’s spa are created from flowers, herbs, spices and fruit sourced from its surrounds. Amann meets with guests individually at the beginning of their stay to discuss their preferences, and the resort’s ‘dine anytime, anywhere, any cuisine’ approach allows them to eat when and where the mood takes them – whether it’s sunset cocktails in the Rock Lounge, a fine-dining experience in the colonial-style Plantation House Restaurant, 2am Teppanyaki, or fish and chips at breakfast, as one recent guest requested. Accessible only by private jet (either your own or Laucala’s, from its private lounge at Nadi Airport), the island might be small at 12 square kilometres, but still offers guests plenty of opportunities to get active between eating occasions: from the David McLay Kidd-designed 18-hole championship golf course, to horseback riding, tennis, diving and snorkelling in the island’s inner reef, or plunging the depths in Laucala’s private submarine.