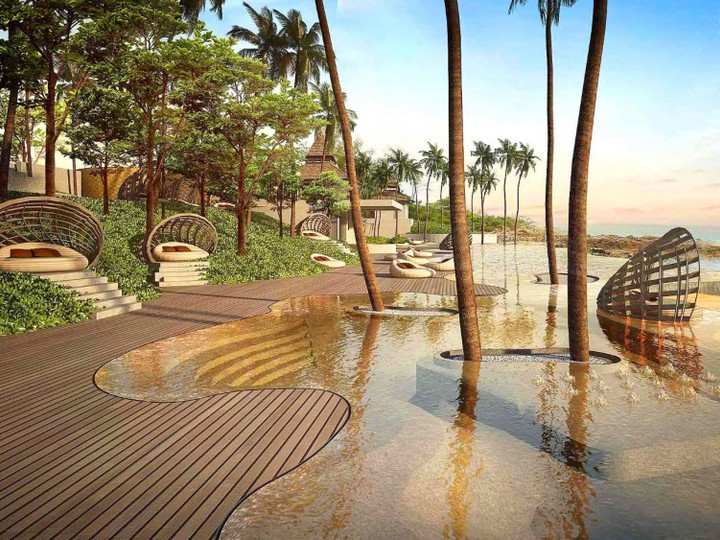 Overlooking the emerald waters of the Gulf of Thailand, the new resort inhabits 58 acres of dramatic coastline and lush gardens.

Ritz-Carlton has claimed a new slice of paradise. Nestled within a private bay overlooking the emerald waters of the Gulf of Thailand, the Ritz-Carlton, Koh Samui has debuted on 58 acres of dramatic coastline and lush gardens with 175 suites and villas and a 3716-square-metre spa. Built on the site of a former coconut plantation, the Ritz-Carlton attempts to marry contemporary design with authentic Thai architecture, adding natural materials like coconut and locally made ceramics to sleek wood-paneled walls and minimalist furnishings in muted colours. But it is the property’s expansive Spa Village Koh Samui that best brings local flavour to the fore, with signature rituals like the Songkran Shower — inspired by Thailand’s annual Songkran festival — take place in serene treatment salas overlooking a meditative pond.

Other immersive offerings include the resort’s Muay Thai gym, which features an indoor kickboxing ring where guests can learn Thailand’s combat sport from local instructors, and an on-site temperate swim reef that is home to more than 50 species of fish. Seven dining options take varying approaches to the local cuisine, from Shook! (a slick dining space focusing on both Asian and Western dishes) to Pak Tai (serving a more traditional take on southern Thai cuisine). Rounding out the diversions are two white-sand beaches, a beachside pool, a watersports center, and two tennis courts.