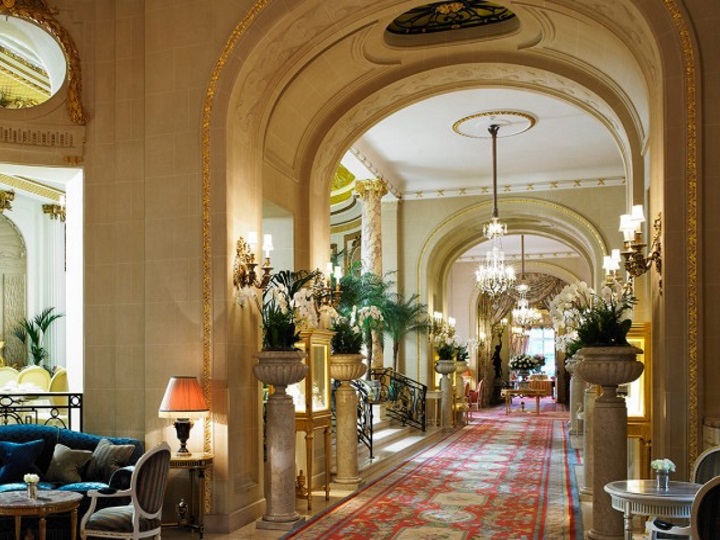 There's nothing quite like London in the springtime. The air is crisp, the Royal Parks are in full bloom, and the long, grey winter is finally over. Luring travellers even more this season are a host of new and recently renovated hotels with splashy new suites, Michelin-starred dining experiences, and top-to-toe renovations.

From a high-design hideaway in Knightsbridge to an "unhotel" in fashionable Notting Hill, these 10 luxury properties are giving us a serious case of spring fever. London's landmark Ten Trinity Square building has been home to the city's port authority and, more recently, James Bond (it doubled for the MI-5 headquarters in the film _Skyfall_).

The circa-1922 structure's latest iteration, however, is most certainly its finest. Opened in January as the Four Seasons London at Ten Trinity Square, the gem has been beautifully updated with top-grade materials, up-to-the-minute technologies, and luxurious amenities. Dining options include the first UK restaurant from three-Michelin-starred French chef Anne-Sophie Pic. A stunning 1680-square-metre spa features eight treatment rooms and a traditional Moroccan hammam. For a true taste of Ten Trinity Square's original architecture, check in to one of the nine ground-floor Heritage Suites, adorned with 4.8-metre-tall ceilings and restored columns and plasterwork. (fourseasons.com) Designed to evoke what Hempel calls "a proud Italian-English townhouse," the jewel-box hideaway — already a hit with privacy-seeking couples and CEOs — is entirely residential in feel, from the informal lobby (where there are quiet nooks and book-laden tables in lieu of a proper front desk) to the 35 perk-filled rooms (many of which overlook a quiet garden).

A restaurant from the Michelin-starred chef Alfredo Russo, a traditional marble hammam, and partnerships with local businesses add to the private-club feel. (thefranklinlondon.com) In 2015, this Hyde Park Corner mainstay revealed a $US100 million (about $A130.4 million) renovation that overhauled everything from the obvious (like stunning new suites, including the over-the-top Lanesborough Suite) to the not-so-obvious (electrical wiring and other back-of-the-house systems).

This spring, however, all the buzz will be about the property's new Lanesborough Club & Spa, an 1670-square-metre centre that is sure to become the city's most exclusive private health retreat. Open only to hotel guests and a small and exclusive membership, the club will feature facilities like thermal suites, a hydrotherapy pool, spa-treatment rooms, an extensive fitness area, relaxation lounges, and semi-private dining spaces — all crafted with top-end materials like silk wallpaper, wood panelling, leather upholstering, and oak and marble flooring. Since its 1865 inauguration by HRH the Prince of Wales (who later became King Edward VII), the Langham, London remains one of the city's most revered grande dames, drawing guests to its prime location on Regent Street for beloved rituals like afternoon tea at the Palm Court (believed to be the birthplace of the indulgent tradition) and cocktails at the David Collins–designed Artesian bar. Not one to rest on its laurels, the hotel recently launched 115 new guest rooms, including 25 stunning suites. Roughly one-third of the Langham's rooms has also been refreshed in a crisp, refined style; and five new residences have debuted with designer kitchens, where guests can enjoy special menus from Chez Roux. True to London — and Langham — tradition, all suites and residences are attended to by a team of stellar butlers. (langhamhotels.com) Opened in 1851 in 13 converted Georgian townhouses, the discreet Flemings Mayfair has had a busy couple of years thanks to a $US20 million (about $A26 million) refurbishment. First to get makeovers were the 129 rooms, suites, and apartments, which feature a classic-yet-contemporary blend of traditional Georgian heritage and 1930s-inspired touches. Our favourite place for a springtime tipple, however, is in-room, thanks to new complimentary gin bars stocked with five types of gin, including the Flemings' own custom blend. (flemings-mayfair.co.uk) Tucked away in a 17th-century estate on a quiet cul-de-sac off St. James's Place, the Stafford is an elegant retreat removed from the city bustle. Ready to usher in the arrival of spring are 13 new Carriage House rooms, available for stays starting April 1.

The accommodations will feature fresh decor from the famed designer Alexandra Champalimaud, who took inspiration from the estate's history as a nobleman's residence to create a timeless mix of modern British quirkiness and classic Englishness. Further upgrades will be noticeable in the hotel's main house, where Game Bird has opened under the direction of chef James Durrant (a protégé of both Gordon Ramsay and Jason Atherton). Among the many delights at the new restaurant are a dedicated oyster menu, elevated game dishes, and traditional Sunday roast served from a trolley. (staffordlondon.com) Since its early days as a gentleman's club in the late 1800s, the Athenaeum has possessed a certain prominence among the elite, drawing everyone from Albert Einstein to Marlon Brando.

Following a recent renovation by the British firm Kinnersley Kent Design, the hotel has emerged bolder and better than ever with a new look that melds the classic and contemporary. In the reimagined lobby, floor-to-ceiling windows connect the hotel to the Green Park, one of London's eight prestigious Royal Parks. The family-owned hotel has also forged a partnership with Michelin-starred London chefs Chris and Jeff Galvin — known as the Galvin Brothers — whose market-driven cuisine now anchors the new Galvin at the Athenaeum restaurant.

A new and improved bar program, meanwhile, features a craft cocktail menu designed by the noted Italian mixologist Giancarlo Mancino. Among the 162 accommodations, our favourite for spring are the 18 Victorian residences with private entrances and expansive layouts that include large living rooms and kitchens. (athenaeumhotel.com) The iconic Ritz London marked its 110th anniversary in 2016 — and to celebrate, it got itself a brand-new suite. Launched last fall, the 112-square-metre Green Park Signature Suite overlooks one of the city's legendary Royal Parks for spectacular views of spring in bloom. In addition to two en-suite bedrooms, the suite features a living room with a marble fireplace and oak dining table for six, a kitchen outfitted with Miele appliances, and high-tech amenities like a 55-inch (140cm) curved smart HD TV and under-floor heating. Guests of the Royal Suite enjoy VIP perks like a dedicated 24-hour butler and airport transfers in the house Rolls-Royce Phantom. (theritzlondon.com) It hasn't been that long since this Fairmont-managed hotel underwent a refresh (it reopened in 2010 with a whole new look), but that does not mean there aren't new reasons to check in this spring. In the last year, the Savoy has introduced two new suites, both imagined by award-winning designer Pierre-Yves Rochon and ReardonSmith Architects.

The light-filled Savoy Suite — whose stunning views over the River Thames and other city landmarks inspired Claude Monet (who stayed in the suite three times between 1899 and 1901) to paint his famous _Charing Cross Bridge_ series — has been redesigned as an "Artist's Residence," complete with a rotating private art collection by various contemporary artists. A fireplace, private bar, and 24-hour butler service round out the perks of the suite, which will also host regular salon evenings led by the artists featured in its exhibits. Meanwhile, the remodelled Royal Suite — a favourite among visiting dignitaries and CEOs — is welcoming guests with a warm, residential-style decor and VIP perks like a chauffeured Rolls-Royce and exclusive use of the private Royal Circle area in the hotel bar. Royal Suite guests also receive 24-hour access to their own dedicated "Savoy Entourage," which can include everyone from a butler or concierge to a personal stylist or bartender. (fairmont.com) In the 1990s, Tracy Lowy founded the Living Rooms collection of "unhotels" to offer boutique properties that evoke the feeling of staying at a well-connected friend's residence, with handpicked furnishings and artwork, quiet side-street settings, and all the best neighbourhood recommendations. The brand's newest property, the Laslett, embodies this philosophy to a T. Set within five Victorian mansions in leafy Notting Hill, the boutique hotel is filled with a curated collection of British-designed art, antiques, and curios. It's all very quaint and comfortable — much like you would expect from the home of a close companion — but with top-tier services as well.

Concierges can help travellers with everything from making reservations at hard-to-book restaurants to procuring oft-forgotten necessities like pyjamas and stockings. (living-rooms.co.uk)