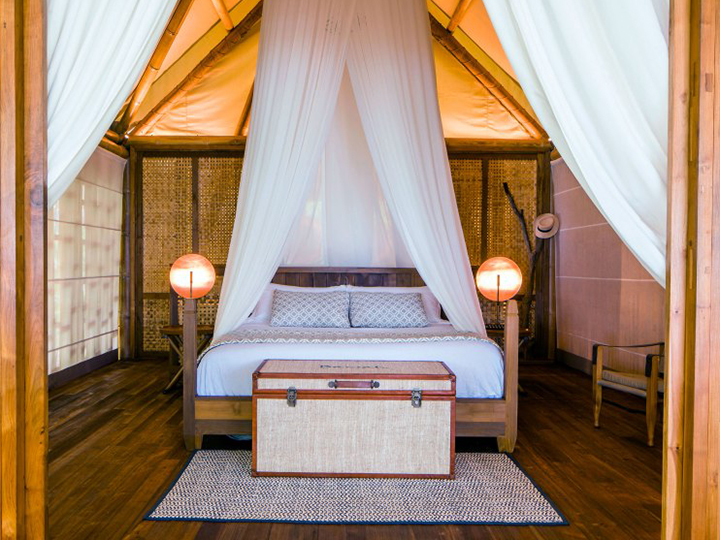 The upscale eco-resort is unlocking a less-travelled corner of south-east Asia for a lucky few.

Set to open in August, Bawah Private Island is bringing incognito luxury to the little-known Anambas archipelago of Indonesia. The tropical resort — comprised of a cluster of five isles nestled among three untouched lagoons — is an antidote to the polished properties of nearby Bali, free of crowds and tourist attractions, and bearing a look that is more Robinson Crusoe than Ritz-Carlton. But Bawah is no slouch in the luxury department. Priced from $US2000 (about $A2630) per couple per night, the resort's 35 accommodations include 21 beach villas, three garden accommodations, and 11 overwater safari-style tents — the first of their kind in Indonesia. Each promises sprawling sleeping and lounging spaces. Guests — of which there will be no more than 70 at any given time — will have exclusive access to Bawah's 29 picturesque hectares, including 13 private beaches, along with an infinity-edge pool, a yoga pavilion, and a domed thatch-roof main house featuring a spa, restaurant, and bar. The creators of Bawah Island went to great lengths to keep this slice of paradise in pristine condition, initiating a zero-pesticide, zero-fishing, and zero-waste program. Such conservation efforts will likely be the key to Bawah's success as well, ensuring that empty beaches and wild jungle remain as blissfully unspoiled as ever before.