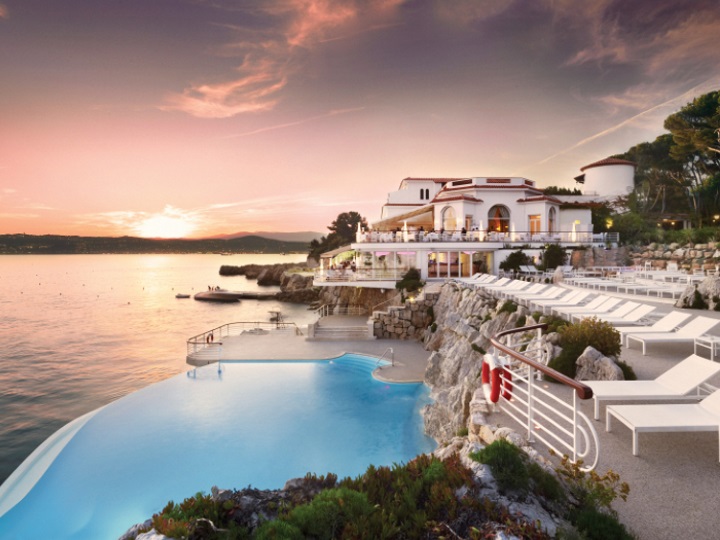 Escape the cold this winter and discover some of the world’s most beautiful beaches accompanied by spectacular resorts and exclusive amenities.

The British playwright W. Somerset Maugham famously called the Côte d'Azur "a sunny place for shady people." But while it's true that the summer sun seems to shine brighter on the French Riviera, the jet set that flocks to it every season is hardly of ill-repute.

Indeed, Pablo Picasso, Brigitte Bardot, F. Scott Fitzgerald, and Edith Wharton have all been regulars; today, the list of VIPs and A-listers who frequent the sun-dappled region goes on and on. The appeal is no surprise.

Here, you'll find the world's most beautiful beaches lining its most stunning sea. Look further and you'll discover spectacular resorts sporting Michelin-star restaurants and exclusive amenities. And this year, there are more reasons than ever to make a break for Maugham's "sunny place." Read on for this summer's French Riviera hot list. Since its grand opening in 1967, the chic Hôtel Byblos Saint-Tropez has remained the place to see and be seen among the French Riviera's well-heeled crowds. The cliff-side resort, which was first constructed by the Lebanese billionaire Jean-Prosper Gay-Para in an attempt to woo the actress Brigitte Bardot, has today grown to resemble a miniature Provençal village, dotted with colourful stucco villas and century-old olive trees.

To honour its 50th anniversary this summer, the hotel has partnered with luxury brands like Goyard, Audemars-Piguet, and Missoni Home to create such customised guest offerings as a limited-edition watch and a colourful new suite.

Additional celebratory offerings include a special dish at the Rivea by Alain Ducasse restaurant (sea bream marinated in N°50 olive oil and served on a 50-year-old olivewood platter) and the recently renovated Les Caves du Roy club. Of course, one thing that hasn't changed a bit over the last half-century is Byblos's beautiful setting high above the Gulf de Saint-Tropez — still the best in town. (byblos.com) The aptly named Le Majestic is all about movie-star glamour, with a location right on Cannes's Croisette, fronting the Mediterranean, and right next to the red-carpeted steps of the Festival Hall. Inside, black-and-white portraits of French movie stars like Hean Gabin and Alain Delon line the walls. And in the dove-grey Christian Dior penthouse suite, you'll find a private salon. While the central chateau of the Hôtel du Cap-Eden-Roc is the last word in timeless elegance, it is possible to have some serious summer fun among its impressive splendour. The 103-year-old hotel's saltwater pool carved out of a basalt rock cliff is the place to sip a crushed-ice Bellini; the five clay tennis courts, meanwhile, are this seasons home to summer-time coaching sessions. Set on the tip-top of the Cap-Ferrat peninsula amid 7 hectares of lushly landscaped gardens, Four Seasons's exquisite white palace is truly difficult to leave. This summer, however, the Grand-Hotel du Cap-Ferrat is encouraging guests to take off and get lost on the backroads of the French Riviera and beyond with its En Route to la Dolce Vita package, an exclusive driving experience that combines classic cars and swanky accommodations for an unforgettable journey.

Guests can choose from such vintage vehicles as a 1961 Giulietta Spider or Mercedes-Benz 190 SL Cabrio, hitting up favourite hot spots throughout the Cote d'Azur and Italy. The road trip ends in either Milan, Cap-Ferrat, or Florence, where guests will stay at local Four Seasons properties. (fourseasons.com) Set on a 2-hectare peninsula, a seashell's throw from Monaco and Nice, Hôtel Cap Estel is surrounded by the sea, ensuring security and exclusivity. Just 60 guests stay at the property at any one time, ensuring that the infinity-edge pool, private beach, and Patrick Raingeard restaurant are never crowded.

This summer, Cap Estel regulars will find welcome changes in the hotel's stunning La Corniche suites, which have all been redesigned with bright interiors and state-of-the-art technology. Same as ever, of course, are the views of the sea, which can be admired from every corner of the iconic property. (capestel.com) Just minutes from Saint-Tropez, La Réserve Ramatuelle is a longstanding mainstay for the French Riviera elite. This summer, the hotel's well-heeled clientele is sure to clamour for a chance to stay at one of its two new villas, which debuted at the end of last year's season. The five-bedroom Villa 1 pays homage to the Côte d'Azur's iconic 1970s residential architecture with white shutters and terracotta floor tiles.

Set among lush Mediterranean gardens, the villa's swimming pool offers panoramic views, yet remains hidden from plain sight. The three-bedroom Villa 2, meanwhile, features a crisp and cool colour palette and wide bay windows that keep the views of Escalat Cove and Cape Taillat in view at all times. (lareserve-ramatuelle.com) Antibes's storied Hôtel Belles Rives oozes glamour and history. Ernest Hemingway, Pablo Picasso, and Rudolph Valentino have all been past guests. F. Scott Fitzgerald wrote Tender Is the Night there, and Miles Davis arrived for a stay in a pink Jaguar.

Today, the hotel remains beloved for its unsurpassable location steps from the belles rives (beautiful shores) of the crystal-clear Mediterranean Sea. This summer, the hotel will host an instalment of its acclaimed Bacchus Dinner series in its recently renovated La Passagère restaurant.

Priced at about $US160 (about $A215) per person, the June 10 event will feature cuisine by the Michelin-starred chef Yoric Tièche and pairings by sommelier Michel Jeanneau of Champagne Roederer. (bellesrives.com) The only Antibes hotel located right on the beach, Cap d'Antibes Beach Hotel is a contemporary oasis with an unrivalled setting. This season, the 35-room Relais & Châteaux is celebrating the arrival of summer with eight recently renovated suites, each with a terrace surrounded by lush Mediterranean gardens and swaying palms.

At the Michelin-star restaurant Les Pêcheurs, seafood is delivered daily via boat; the beachfront bar is the best place in town for a rosé. Our favourite perk, however, is the hotel's reservation line for beach loungers — the only amenity of its kind in all of Antibes. (relaischateaux.com)