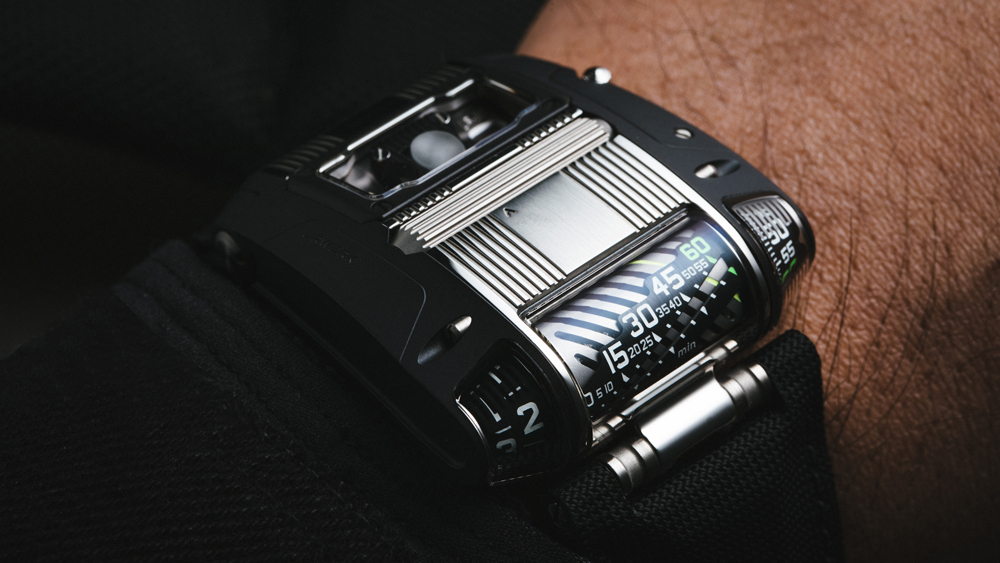 Unconventional does not begin to describe the model’s innovative time display.

Urwerk founders Martin Frei and Felix Baumgartner, the Swiss watch industry’s resident philosophers, have created some of the world’s most boundary-pushing timepieces. Their latest model, the Urwerk UR-111C Two-Tone, only bolsters their reputation for horological adventurousness.

The UR-111C debuted in 2018 as part of the brand’s “Special Projects” collection and now comes in a black PVD and brushed steel case.

Unlike most of Urwerk’s timepieces, which rely on a satellite-like time display, the model indicates the time using a retrograde linear minute display, with the numerals set at a 30° diagonal slant—much like a driver’s watch—for better readability. 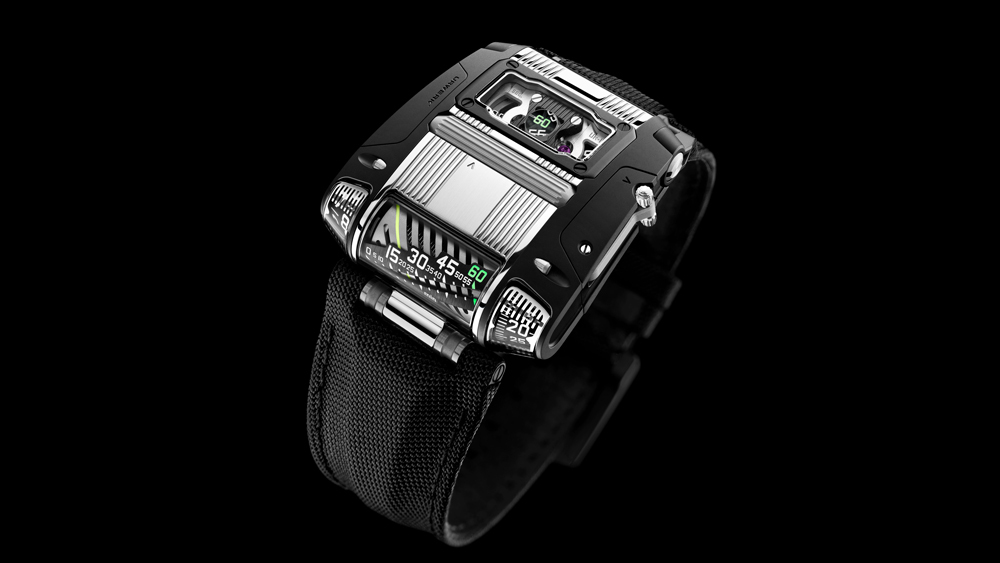 The digital seconds display is even wackier. Mounted on two tiny wheels, each of which weighs 0.018 grams (0.025 grams if you count its six numerals), the seconds, which are positioned on a bed of optical fibres (yes, really), appear as openwork Arabic numerals at the top of the watch.

“Having a watch with a second display was, for me, always important because that’s the way we see time passing, as we do with an hourglass,” said Frei, who serves as Urwerk’s chief designer. “And I think the way the two wheels of the UR-111C’s seconds display fall into each other is like sand passing down through an hourglass. The display is a celebration of the second. Because at the end, it’s all about giving pleasure—haptic pleasure.”

The model’s most groundbreaking innovation, however, may be its fresh new take on the winding crown, which is to say no crown, at least not in the way we’ve been conditioned to expect it. In the UR-111C, the conventional side-mounted winding crown has been replaced by a roller system that sits in the middle of the case top, and works in such a way that it charges the self-winding movement. By releasing a small lever to the right, the wearer can use the roller to set the time.

“With the UR-111C, we focused on one element of the watch that hasn’t changed since it was introduced in the 1840s — the winding crown,” Baumgartner said in a statement. “We completely redesigned it, changing the way a watch is wound. For this, we had to rework the entire winding train. It was a long and sometimes arduous process, but we succeeded. We devised a new way of interacting with a watch and a new bond between the watch and its owner.”