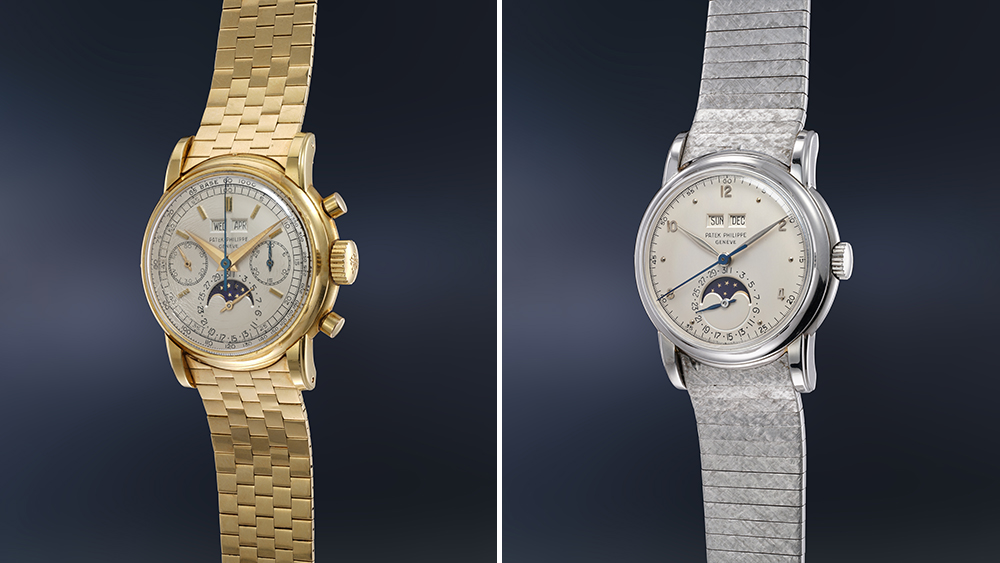 Both rare perpetual calendar chronographs will be sold at The Geneva Watch Auction: XIV in November.

If you think you’ve seen every Patek Philippe under the sun, Phillips is about make you think again.

On Thursday, the auction house in association with Bacs & Russo revealed that two previously unknown Patek Philippe watches will be offered at The Geneva Watch Auction: XIV this November. Both perpetual calendar chronographs fall under the watchmaker’s reference 2499, though the yellow gold option is a first series example.

The rare gold watch is retailed by Serpico y Laino with its original bracelet, a well-preserved dial, and an unpolished case. Pre-sale estimates for the timepiece run between approx. $2,970,647 and $5,941,295. The second 2499 reference comes from the family of the original owner, and features a pristine dial and strong case. It is expected to fetch between approx. $1,188,259 and $2,376,518

The sale of both 2499 models adds to an already impressive roster of watches slated to cross the block in Geneva. Back in July, Phillips revealed that a set of five series number 001 F.P Journe “Souscriptions” watches will also be offered at the sale. The limited editions in the set have never been auctioned before, and each piece will be sold as an individual lot. And last month, Phillips announced that four coveted Philippe Dufour watches will also go under the gavel at the auction, marking the first time in history that all four watches will be offered by one auction house during a single season.

And that’s not all: Another Patek Philippe carrying reference 2497 will be presented at the auction. The white gold perpetual calendar also features an original white gold bracelet with “Florentine” finish, and is one of just three within its series cased in the precious metal. The watch is estimated to hammer down for between approx. $2,227,985 and $4,455,971

The Geneva Watch Auction: XIV takes place on November 5 and 7. For details on all the watches headed to the auction, check out Phillips.com for more information.