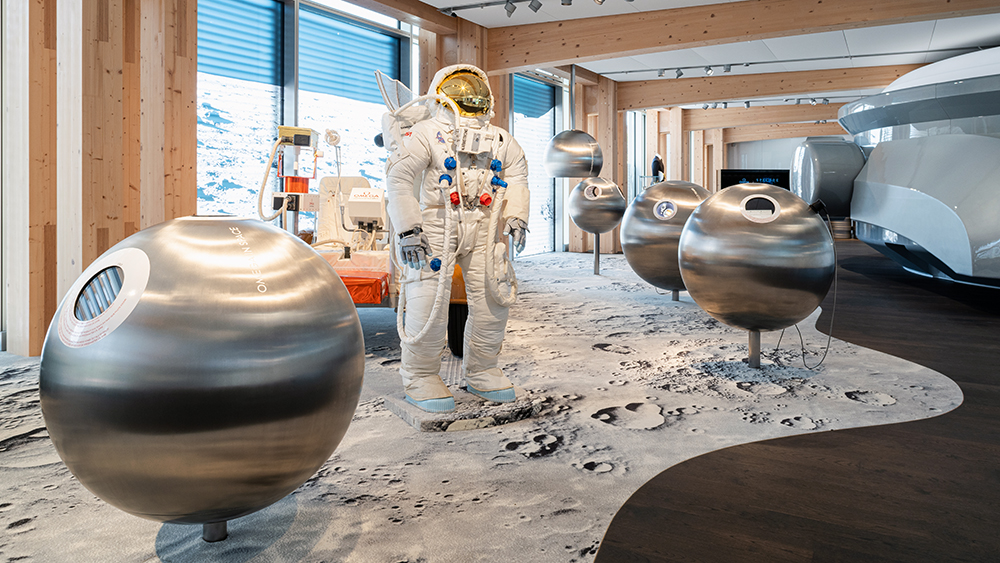 The space has expanded to three times the size of the original location.

Houston, we have lift-off. Despite being open to the public since July, Omega hasn’t communicated about its new museum next to its headquarters in Bienne, Switzerland until today. Robb Report had exclusive access to film inside the museum in August for an up-close look at the watchmaker’s visual storytelling of its 125-year-old history. You can expect to find all of the brand’s famous pieces from 007’s Speedmaster and the first Omega stopwatch used to time the 1932 Olympics to its many pieces created for NASA.

The first exhibit that catches the eye when you walk into the museum, just past a replica of an early watchmaker’s desk, is an Olympic runner’s track where you can actually test your speed against an Omega timer. There are two starting blocks in case you want to race a friend. The track is short—clearly, you can’t fit a full Olympic track in a watch museum—but you can, at least, get a feel for the challenge. Just adjacent in a 50-metre snaking silver display case meant to look like a watch bracelet is the very first watch used by Omega to time the Olympics in 1932. The brand has been the official timekeeper at almost every Olympic Games since, 28 in total, and will fulfil the role again next year when the games come to Tokyo.

Also inside the case, which runs the length of the museum and has 64 displays, is JFK’s watch, still bearing the marks of time on its well-worn leather wrist-band, and Elvis Presley’s Omega watch gifted to him by RCA Records, which the brand purchased for US$1.8 million last year. Acquiring its historical timepieces at auction is something that is a focus for the brand. “I’m very much interested in having our head of heritage and museum curator being there in the room, showing that we care about everything,” says Omega CEO Raynauld Aeschlimann. “If we feel it’s a piece that well represents our values, then we want to show it and share it with people.” But he adds, “Sometimes, honestly, we also have our budget.”

Some other interesting pieces, outside of the headline-makers, are an array of the brand’s WWII-era watches, including their first watches to use Super-LumiNova for legibility during night missions. There is also a section devoted to Omega’s acquisition of George Daniels’ legendary co-axial escapement invention, as well as moon watches from the ’60s in their original boxes. But you won’t find Buzz Aldrin’s Omega that he wore on the moon, because it got stolen en route to the Smithsonian in 1970 and has never turned up since. Toward the back of the museum are ’60s-inspired, space-age cases that display other timekeeping inventions for NASA like the original order forms for the moon watches, as well as a few of the Alaska Project watches and the last watch worn on the moon on the wrist of astronaut Gene Cernan.

But the Mona Lisa of the museum, according to Aeschlimann, is the original Calibre 19. “This was the first Omega watch and it gave us, already at that moment, everything that we are today,” he says. “It also gave us the spirit. When Mr. Brandt created that famous movement, he had as a first, the vision of creating an industrial manufacture. He was the first to say, ‘Hey, I’m not going to take a hundred people and make them work on one movement each from A to B.’ He was the Henry Ford of the watchmaking.”

Just past the 007 memorabilia—which is surprisingly not the hyped-up section of the museum you would imagine—is another room with a film dedicated to the Calibre 19, which takes guests inside the workings of the movement. The screening room actually comes housed in a giant glossy gray replica of a watch head. Aside from the two screening rooms and the race track, there are smaller interactive elements like a miniature bobsled replica where you can time your human instincts for a finish line crossing versus Omega’s current technology for detecting an Olympic win. The challenge is real—we never even came close. Or you can stick your head in a bubble hanging from the ceiling and relive a 14-second countdown of Apollo 13’s return to earth and hear a few stories recounted by those who lived it.Omega was the first watch brand to open a museum to the public in 1983, but in a big anniversary year for the brand—the 125th anniversary of the Caliber 19 and the 50th anniversary of the first watch worn on the surface of the moon—it was due for a facelift. The 940-square-metre museum designed by Shigeru Ban sits within the Swatch Group/Omega campus just next to Swatch Group’s impressive headquarters, also designed by Ban.

“It was time for us to bring this experience on another level,” says Aeschlimann. “We were lucky enough to have Swatch group investing that many millions into a building that would be proper for us to create a new museum and go further into our DNA.” The new location, just across the street from the previous museum, has expanded to three times the size of the original at 10,118-square-feet. “It was very important for us, after having been the first to create a museum a long time ago, to create one that is for the next generation,” says Aeschlimann. “One with experiences, that is annually visited, with  an immediate way of making people understand who we are.”

The museum concludes with a large replica of watch movement that acts as a display case for its latest calibers, with the Omega Seamaster Planet Ocean “Ultra Deep”—which achieved a world-record for a dive of 10,928 metres closing out the presentation.

While the new space has allowed Omega to go even further with its rich history, there is a feeling that there could be even more bells and whistles. In the relentless age of Instagram, brands will have to continue to dig deeper to come up with creative, visual and photo-worthy new ways of telling their stories. But Aeschlimann did mention that plans for the future were already in the works. “We’re never satisfied about any achievement we’ve made,” says Aeschlimann. “There is plenty of great news coming. James Bond [No Time to Die] is just now, being filmed on set.”