Does a lesser size hold less appeal? In what’s shaping as the year of the pilot at IWC, we take the historic brand’s latest, shrunken chrono for an outing.

You may gloss over at the mere mention of a steel sports watch – a ‘luxury’ piece, at that – but don’t. Because we’re happy to state that the just released IWC Pilot’s Watch Chronograph is rather revelatory — particularly in its new 41mm outing.

While integrated bracelets continue to claim all the buzz in this sector, with an arguable glut delivered the past two years, here we’re speaking more broadly in regards to steel sports pieces — an avenue shaded by some heavy set historical figures, from the halo that surrounds Gerald Genta’s Royal Oak for AP (a design he allegedly perfected in just one evening) to the moon dust that gently falls from Omega’s Speedmaster Chrono and the, well, speed and Newman-era cache of the Daytona.

The point is, steel remains acutely alluring as it has for quite some time and despite the almost cyclical knock on the door made by gold (allegedly poised to again do so shortly). 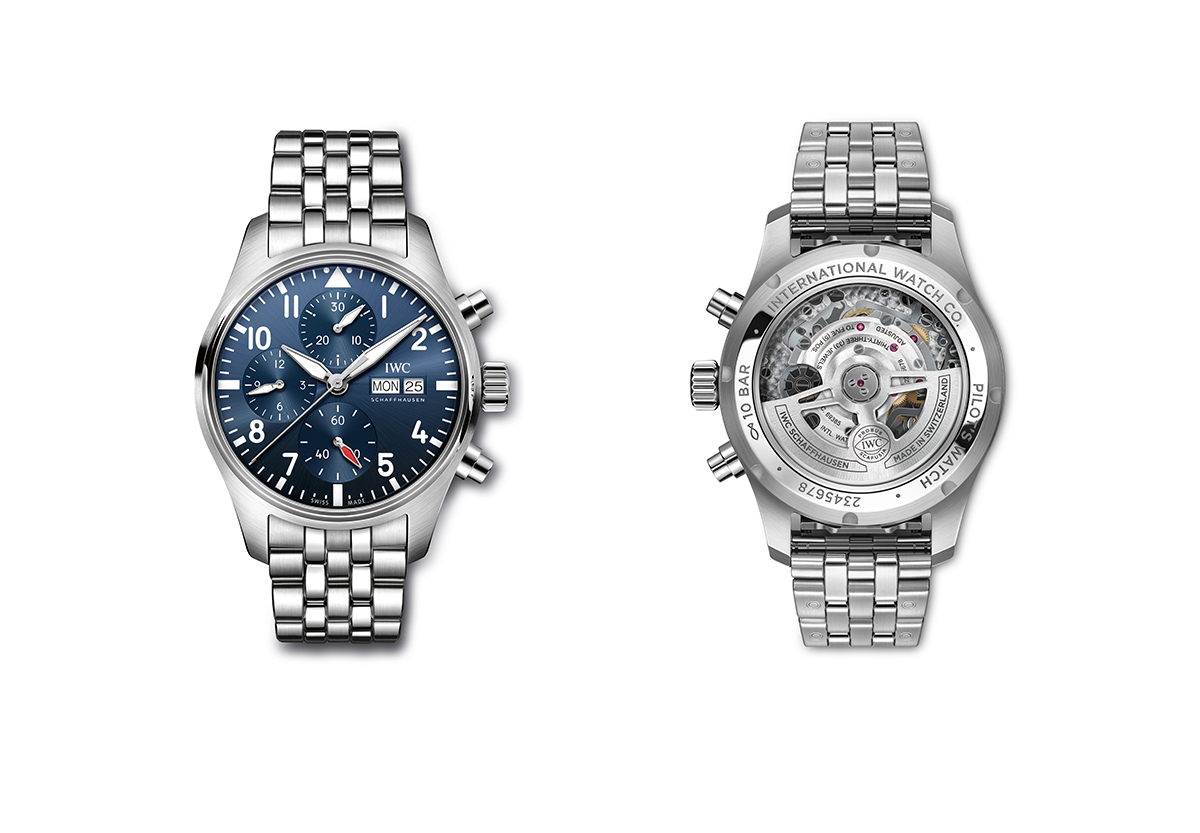 Steel has long stated, and provided, a sense of robust luxury, manliness (wail all you want about that use of that word, it’s true) and general everyday wearability. It’s a concept furthered by the notion of ‘sport’ – though in our week with this newcomer, know it was always removed for such activity beyond some bike commuting.

IWC has some solid skin in the game when it comes to its pilots. The history here is legitimate and straddles both wars — an 85 year period, in fact, that began with functionality aimed at those very men of aviation.

Those years of history are today outed by a very clean design narrative – elegant and refined, as expected given this is IWC.

Our review piece (ref IW388102) boasted, like so many of its steely brethren, an alluring blue dial (green is also available) featuring a detailed trio of subdials and day/date window. While in print that seems a lot – the piece presents unfussy and focused, as though there’s isn’t a lot going on despite the fact there actually is.

Powering all of this appeal is the in-house 69385 calibre chronograph movement, a great movement and one that furthers IWC’s obvious talents when it comes to innovation and ability.

A sapphire glass caseback is a further touch of allure and allows the wearer to see the power and theatre that is 231 individual parts expertly engineered to come together and seamlessly work as one. When fully wound the piece holds a 46-hour power reserve and is water-resistant to 100 metres.

Of the straps, know I quickly jettisoned the provided leather (it didn’t work against the dial) for the steel bracelet and didn’t go near the rubber, though all are easily swappable given the EasX-CHANGE system.

And so to the big question here — size. To lay some context, as a man of wide wrists I’ve never been au fait with anything less than 42mm. Even then some proved a little lacking – 43mm a chosen sweet spot with pieces that hold an immediate presence and don’t ever look awkward.

It’s why I’ve previously engaged IWC’s Pilot Chrono (43mm) and always wore the piece with a sense of pride – it felt comfortable and robust and with a weight that made you aware of its presence without ever being anything other than comfortable.

To be asked to drop a couple of millimetres … well, let’s say I wasn’t immediately convinced though given a gentle push by the brand, was willing to try. And I walk away glad that I did — impressed by a piece that wears far bigger than anticipated and with an appealing sense of heft.

It was present, too — rightly noticed by most and not easily hidden by a cuffed shirt or longer casual jacket sleeve; nor did it look too small against my girth (no, don’t think that !!).

Elegant, balanced, refined and yet robust — such words nearly surmise the 41mm and what’s an accessible piece from IWC, one that shouldn’t be overlooked.

Well, we say that but then also realise that this is THE year of the pilot at IWC with a wealth of new drops which neatly progress February’s debut of the ‘Tribute to 3705’ and comes bearing heady words, such as ‘Mojave Desert’, ‘Top Gun’, ‘Big Pilot’, ‘Big Pilot Perpetual Calendar’ and more.