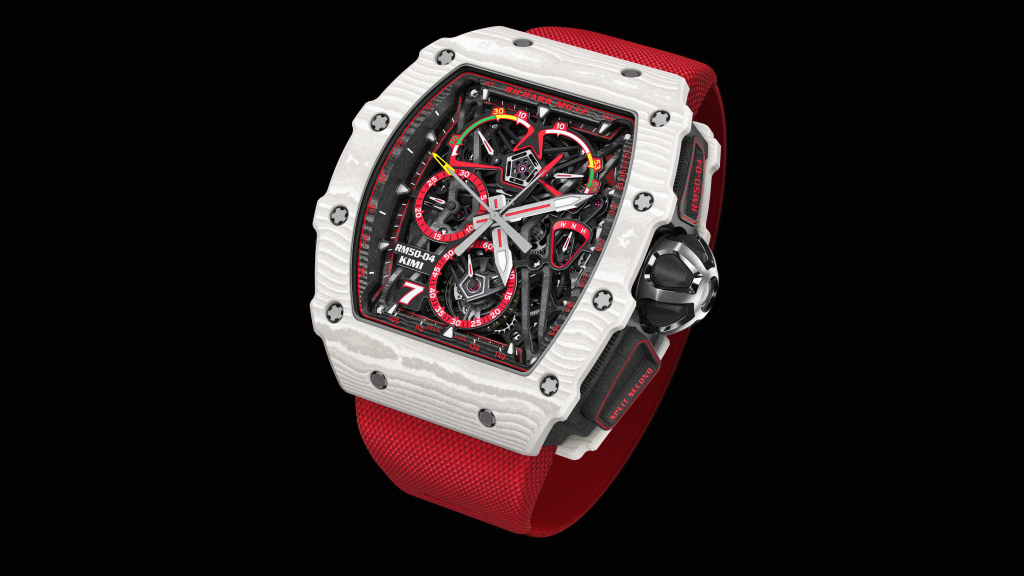 
Known as “the Iceman” for his legendary ability to keep cool under even the most harrowing conditions, the 39-year-old racing veteran drives with the Swiss Alfa Romeo Racing Team. He’s earned his acclaim (Räikkönen was crowned F1 world champion in 2007 and has racked up 103 podium finishes, including 21 firsts, over the course of his 18-year career), and has been working with Richard Mille since 2018.


With the RM 50-04 on his wrist, the Finnish driver won’t have to worry about the timepiece’s ability to handle extraordinary g-forces. Tested in-house to survive impacts up to 5,000 g’s, the watch is a perfect example of Richard Mille’s signature blend of horological complications and super-technical materials.

The high-tech theme is not limited to the movement. Richard Mille worked with Switzerland’s North Thin Ply Technology to perfect the complex manufacturing process responsible for the white quartz material that covers the bezel and caseback—the same colour that appears on Alfa Romeo’s C38 single-seater race car. The process involves interlaying 600 layers of silicon, each 45 microns thick, and impregnating them with a white matrix before heating them to 120 °C. As a result, the material develops a high resistance-to-weight ratio, non-allergenic properties, and excellent resistance to UV rays.


The RM 50-04 Tourbillon Split-Seconds Chronograph Kimi Räikkönen, which bears the number 7 on the dial, is available in a limited edition of 30 pieces exclusively at Richard Mille boutiques worldwide. It retails for US$1,063,000 – that’s around AUD$1,563,938